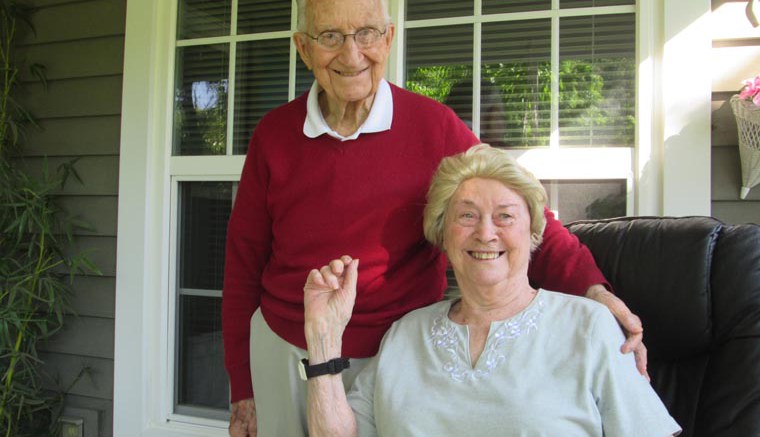 She was married to Luke for 75 years; they met at a dance hall on Butternut Street

Luke Pesane can’t recall exactly how he worked up the nerve to approach Ruth Guckert that night in the mid-1930s at the dance hall on Butternut Street in Syracuse. “She was on a different level,” he said.

“I was always partial to blondes,” said Luke, who turned 100 on Dec. 2. “That’s what happened that night. … We went steady for three years before the war broke out.”

Then came their 75-year marriage. The Pesanes, parishioners at Immaculate Conception Church in Fayetteville since 1951, were celebrated in February this year as the longest-married couple who signed up for the Syracuse Diocese’s World Marriage Day Mass.

Ruth, 97, was known to kiss a visitor’s hands, and she continued that even in her last days. She suffered a stroke Dec. 7 and died the next day. There was a steady turnout for her wake Dec. 14 in Fayetteville. A loving wife and the mother of three children, she was remembered as talented and creative.

“She was quite a dancer. Her dream was to be a Rockette,” said Luke. For eight years, Luke and Ruth lived in Jamesville. They had recently moved to Syracuse so that Ruth could receive nursing assistance.

Ruth grew up in Solvay and owned Ruth’s Style Shop, where she made wedding gowns and specialty dresses. She also worked for Syracuse Pottery for several years. She was a past president of the Plymouth Garden Club, and she crafted hats that Sisters of St. Francis Convent sold at its bazaars. Ruth and Luke belonged to the Cavalry Club in Manlius for decades, and Ruth was a past nine-hole champion there.

Asked what it was like growing up in that household, Ruth and Luke’s son, Jim Pesane, of Brewerton, said Ruth’s goal in life was to make sure her children were taken care of. He remembers his mom sewing all the patches on his Scout uniforms.

“She was the kindest person that didn’t judge anybody, and all of my friends were accepted in her house. And she fed everyone,” said her daughter Susan Korzeniewski, of Liverpool.

“The best grandma,” recalled Erika Korzeniewski, a senior at SUNY Binghamton who turned 22 on the same day that her grandfather Luke turned 100. “I spent every weekend at their house. They took me to church at IC. … If I was good in church, we would go to Friendly’s. … I would always play with her jewelry and makeup; I loved it.” In fact, per Ruth’s wishes, Erika was wearing her grandmother’s watch, earrings, and necklace.

At Ruth’s funeral Mass on Dec. 15 at IC, the pastor, Father Thomas J. Ryan, said that memories of Ruth are a gift from God. “Ruth enjoyed life so much, and lived life fully — because she loved,” Father Ryan said. He remembers always seeing Ruth and Luke sitting in the last row on the left during Saturday evening Masses. Then the couple would go out to dinner with friends.

“The good steward … recognizes the gifts that God gives us, but also recognizes those gifts are not just for ourselves,” Father Ryan told the mourners. “They are to be shared, to be given. And how well she did that — good and faithful steward.”

“Mom’s greetings were always kisses,” daughter Patricia Burgess, who lives outside Detroit, said in her Words of Remembrance at the Mass. She recalled Ruth as a great entertainer, and always willing to help.

“She excelled in throwing parties, coordinating golf tournaments, and setting up fun activities for her garden club,” Patricia said. “Events were well executed, with exceptional detail, right down to the color-coordinated decorations, even producing matching outfits” for Susan and her on special occasions.

Filled with grace and poise, her mother was always positive, Patricia said. “She shared poems and writings with us about how to have a happy day. Her glass was always half full. It was a state of mind for her, and a great example for all of us. She focused on her blessings. She represented the angel she always wore on her sweater and jacket. … She will always remain with us.”

“The real gift of Christmas is the gift of peace,” Father Ryan said. He urged the mourners to “let that peace touch your hearts on Christmas Day, for truly that is what she would want for you. May she rest in God’s peace.