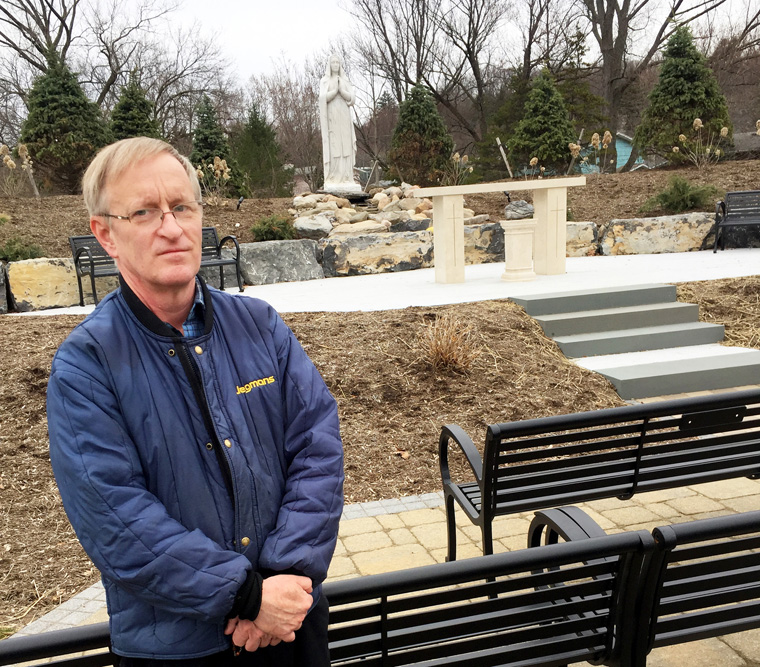 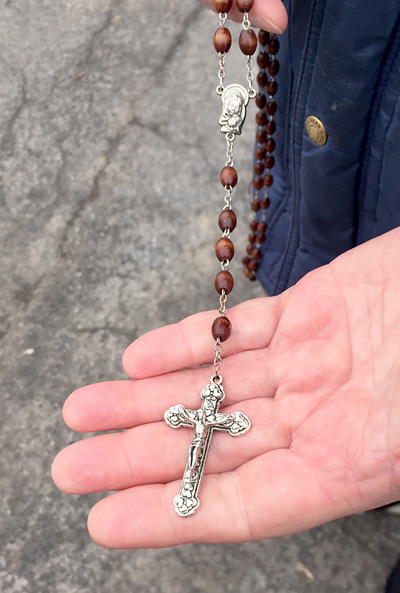 Gaske’s rosary. He bought it at The Franciscan Place at Destiny USA in Syracuse. (Sun photos | Tom Maguire)

The pews are empty but the grotto benches beckon.

On a 48-degree day last week, several people in a short span of time gravitated to the Grotto of Our Lady of Lourdes at Our Lady of Hope Church in Syracuse. The wind was negligible, and the gulls, as usual, were out.

The grotto includes the black benches, an altar, and two giant icons — a statue of Our Lady and a bell tower. The icons were brought over last year from the former Our Lady of Lourdes Church nearby.

“I was not expecting to find anybody here at all,” said Brian Gaske, 62, a Syracuse resident and a meat-department worker at Wegmans in Fairmount. Wearing his Wegmans coat and no hat, he sat with his head bowed and a rosary in his raised right hand.

The novena must go on

After he finished saying the rosary, he said:

“Tomorrow is St. Joseph’s Day. St. Joseph is my patron saint and every year I say a novena to St. Joseph, so it’s not gonna be any different this year. I just came down here to say the same prayers that I say every day, even if the church was open.”

His novena consists of the rosary and the Chaplet of Divine Mercy: “So after we’re done here I’m just going to stand outside the church there, as close as I can to the tabernacle, and just recite the Chaplet of Mercy, and that will complete the novena.”

His intent of the novena varies from year to year. “It’s usually just a different group of friends,” he said, “and people I know who need help and assistance; so I have a group of six or eight people that I’m praying for, asking for St. Joseph’s intercession.”

Perhaps it was the 1980s, he said, when he came to this devotion to St. Joseph: “I was just thinking about it one day that I didn’t have a patron saint, and at the time I belonged to St. Joseph’s in Camillus when I was living out in Camillus, and it seemed like a pretty good fit.”

Gaske admires the virtues of St. Joseph — “his faithfulness, his sense of responsibility and duty that God would entrust him with the most awesome responsibility that any man ever had — taking care of the Blessed Mother and the Son of God. … The idea of the perfect family man who put his family first, who just quietly did what he had to do and that was it.”

The rosary, he said, “was entrusted not so much for ourselves, but it was requested for what GOD wants us to do as far as making a penance and seeking his mercy for other people.”

Sitting in a car in front of the grotto were retired registered nurse Betty Grady, of Syracuse, and her daughter Mary Beth Grady, a former chocolate-maker who was visiting from Chilmark, Mass.

“We came over to say a few prayers to the Blessed Mother,” said Betty, a retired teacher of nurses in Brooklyn and then Syracuse, “and Father [Christopher] Ballard had given us a lovely prayer to say, which we’re saying every day, and also remembering to pray to St. Marianne Cope, who dealt with the lepers on Molokai.

“And we have great devotion to the Blessed Mother and feel that she is in charge of our country, and if we all pray, that she will help us to get through this.”

And what else were they praying for? 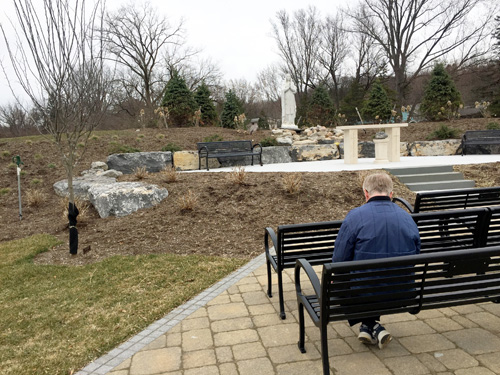 Brian Gaske prays the rosary on March 18 at the Grotto of Our Lady of Lourdes at Our Lady of Hope Church in Syracuse. “Normally I would go into the church,” he says, “but because you can’t …, the grotto is the next best choice.”

Betty said: “For our country, that we will self-isolate and that people will pay attention to the rules that are set before us, so that soon our churches may open again.”

Betty has belonged to Our Lady of Hope Parish for about 60 years, going back to when it was St. James Parish.

Her daughter Mary Beth attended the former St. James School, and Betty was active in the Mothers Club and Altar and Rosary and all the different programs they had then.

Last October, mother and daughter had attended the Ritual Mass for the Dedication of an Altar in the Grotto of Our Lady of Lourdes.

Mary Beth thought it was great that Bishop Douglas J. Lucia had brought up St. Marianne Cope, “because I think a lot of her success was that she was practical and really promoted hand-washing …, and I think that that’s really great that he’s telling us to turn to her, because it’s good to use science with religion.”

Reflecting on her time as a St. James School student, Mary Beth said: “It was a great place to grow up and study and learn about a sense of wonder and curiosity.”

Is there a sense of wonder about where she lives now, in Chilmark on Martha’s Vineyard?