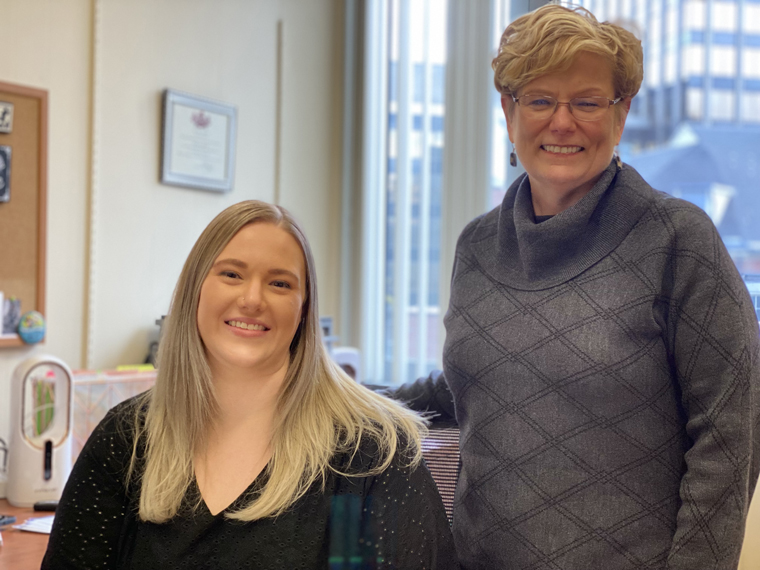 The week of Nov. 15-21 was celebrated as Safe Environment Week in the Diocese of Syracuse, “a time to recognize our clergy, members of religious orders, employees, volunteers and so many others in the community who work together toward a common goal: to prevent sexual abuse, not only in our parishes, schools or agencies but also in our own neighborhoods and communities.” That is the mission as stated on the department’s website and it is a mission the department staff and diocese take very seriously.

Director of Safe Environment and Victim Assistance Jacqueline Bressette explains that during this week, “We celebrate everyone who goes to the (Safe Environment) training as well as our site coordinators. … During April, Child Abuse Prevention Month, we celebrate our facilitators because they are the ones providing all the training.” Splitting up the observance gives the diocese the additional opportunity to shed a very positive light on a difficult subject.

“To date, we have trained over 44-thousand people in initial training. Fourteen- to 15-thousand children receive the Safe Environment training once a year, at least,” adds Bressette. “Positive stories come out of providing those trainings to the kids, and it takes a whole diocese to be sure that kids who are vulnerable are safe. … We should be proud of everything we have done in our diocese.”

The Diocese of Syracuse has one of the strictest Safe Environment programs in the country according to Bressette, and it’s backed up by those who perform necessary independent audits of the program. Further verification of Syracuse’s high standards and attention to detail comes through interaction with other dioceses around the country.

Part of Joelle Zarnowski’s job as the Syracuse Safe Environment Program coordinator is to work with volunteers who may be visiting our diocese for various reasons and make sure their Safe Environment credentials are in place and up to date.

“We are checking when volunteers come from other dioceses to work with kids, and we work with volunteers who take groups of people who are ill or disabled to the shrine at Lourdes, France, a couple times each year,” explains Zarnowski. She adds that staff from other dioceses tell her that “we really appreciate you taking this extra step to make sure these vulnerable people are protected.”

“I think our code of conduct is a little more beefed up than others; everybody is subject to it,” Zarnowski explains. Other dioceses may have separate, distinct codes for clergy, staff, lay volunteers and other groups but she says, “With ours everybody is under the same code of conduct.” It is up to each diocese to formulate and execute a Safe Environment plan, and the Syracuse effort is recognized as one of the most thorough and complete in the country.

Despite the high standards and long record of training and recertification success, there are still people who question why everyone involved in the diocese must be trained.

According to Zarnowski, “Even in the dark times we are coming out of, people still come to training saying ’Why do we have to do this?,’” referring to the crisis as a clergy problem. “I think we are starting to see a shift in the mentality surrounding it. People understand that this isn’t a punishment, it’s not something bad, it’s giving them the tools they need to keep kids safe and to recognize when someone isn’t safe.”

People who may push back on the high standards of training often have a change of heart by the end of the introductory class session and the recertification classes.

“I’ve never had more compliments and more people verbally thanking me,” adds Zarnowski in referring to recent recertification classes, some of the first in-person sessions since the beginning of the pandemic. “I’ve never had that happen before. People say ’This is so important’ and ‘I did learn some new things.’ It’s all about the way you approach it. … You explain why you do this. People react with ‘Wow, they are doing everything they can to keep our kids safe.’ This is a good thing.”

Bressette points out that that “things change rapidly. We tailor our code of conduct based on incidents that happen here in the diocese. We are ready to revise the code, even though it’s only three years old, based on things that have happened.”

Experience is the best teacher in Safe Environment, especially in keeping up with societal changes. Bressette says, “We live and we learn. There is no playbook for this. It’s not all black and white; we are constantly learning and keeping up to date on how to keep kids safe, and for kids to keep themselves safe. That’s been a big focus in our training.”

People are “embracing the code differently” according to Bressette. She points out that part of the training helps volunteers and staff realize some innocent behaviors that can be taken the wrong way.

Zarnowski echoes that: “How many times have we been in training when someone in the room says, ‘Oh my gosh, I’ve been doing that, and I never thought anything of it.’”

Bressette puts a fine point on it. “In the past, people were told ‘Don’t do this and don’t do that!’ Now we explain that you shouldn’t do this or that, and here is why.’”

The department gets the kids involved, sponsoring a coloring contest during Safe Environment Week. This year’s theme is “Be Kind.” Youngsters are invited to choose a page from the three or four offered, do their best coloring work and submit for a chance to win a prize.

“We pick one winner from each grade to win a $50 Amazon card and their pictures are published during Child Abuse Prevention Month,” according to Bressette. The pictures appear on Facebook and in the Catholic Sun and analytics show that the work attracts a lot of online traffic. Bressette adds that “it’s all part of raising awareness.”