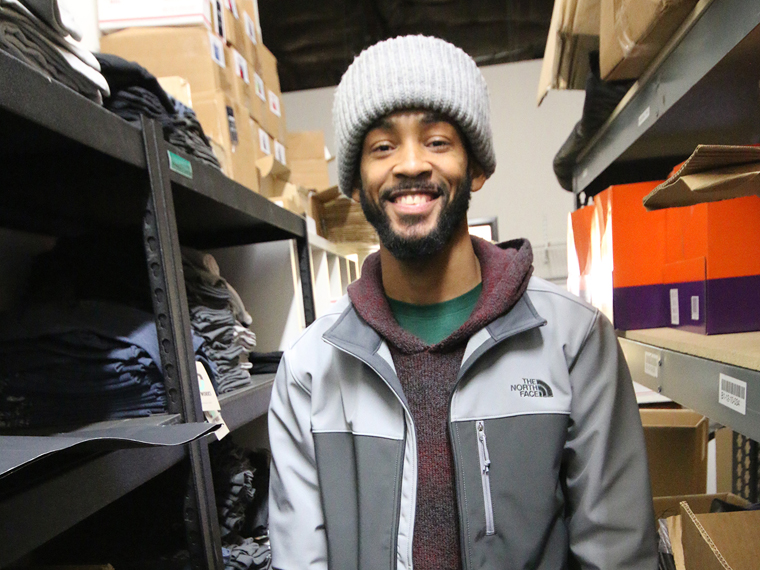 PORTLAND, Ore. (CNS) — On a weekday morning in Southeast Portland, high school sophomore Gabriela Flores sits at a desk, picks up a pencil and concentrates on the work before her.

Her task is not to find the value of “x” in a trigonometry equation, nail a history quiz or craft an elegant sentence for an English essay. It’s to measure, mark and cut fabric for her job at Looptworks, a company that repurposes and “upcycles” materials into handbags, pillows, luggage and other products.

It’s a model that benefits the corporate partners, school families — most teens come from low-income households of color — and, most importantly, the students.

“They gain a sense of pride in their abilities and a level of endurance that I’m amazed by,” added Aiyana Ashley, director of the corporate work-study program. Students don’t always come from stable family structures, “but they leave behind what’s going on in their personal life and become a valuable part of their employer’s team.”

Opened in 2001, De La Salle is a founding member of the Cristo Rey Network, the only association of high schools in the country that integrate college preparatory academics with four years of professional work experience. The first Cristo Rey school began in Chicago in 1996; there are now 37 such schools nationwide; all serve low-income populations.

Looptworks is among 90 work-study employers in the Portland region. The corporate partners range from larger organizations — Columbia Sportswear, the Salvation Army — to local entities, including the Portland Art Museum and Friends of Trees.

Hiring young employees through the program can be cost-effective for businesses and stabilize high-turnover positions. But those aren’t the biggest appeals for Scott Hamlin, founder and CEO of Looptworks, and other partners. They believe students add diversity to a workplace and offer unique perspectives.

Hamlin said the high schoolers are future consumers who share what they are thinking about and “what they think is cool and relevant.”
Businesspeople tell Joy how fun it is to have young people working alongside them. “They also talk about their own learning about equity,” said the principal.

Ashley noted that companies must be willing to mentor students — teens who likely have never been in a workplace before.

“It will take coaching and guidance, but once they are trained and acclimated there’s almost nothing they can’t do,” she said. “Students then bring out that sense the companies have of giving back.”

He said there have been only minor challenges. Sometimes a teen’s interests don’t correspond with the company’s focus. “We’ve had kids who are really engaged and some who aren’t,” he said.

It takes a herculean effort to match the more than 270 students with the companies’ needs, admitted Ashley.

“We try our best, but the goal is to teach the life lesson that wherever you are, you need to do your best,” she said. “If you don’t get what you think is a perfect job, you don’t know what you’ll uncover when you get there.”

De La Salle is aligned with the charisms of St. John Baptist de La Salle, a French priest whose 17th-century educational reforms offered “stout theology wedded to practical training,” Joy said. “Our embracing of Catholic social teaching, honoring the inherent dignity of people, then coupling that with the professional work that’s being done by students at these corporations, I think it fits perfectly” with the saint’s vision.

Students work one day a week Tuesday through Friday, plus one Monday rotation. Instruction time is made up fully in a number of ways, including a lengthened school day.

Joy believes the skills students learn contribute to the fact that 95% of students are accepted into colleges and nearly 90% of De La Salle alumni return for their second year of college. The national average is around 70%.

“They’ve needed to be independent, needed to be an advocate and to figure out how to ask for help among strangers,” said Joy. “That’s not an easy thing.”

Flores spoke to that challenge at Looptworks.

“I was super nervous when I started here,” said the teen, who aspires to be a graphic designer. “I struggled in the beginning, but I’m learning if I want to do a good job, I need to ask questions.”

She has also discovered how to handle deadlines. “I was given a couple weeks to work on a design, and I realized if I just chill out and focus, I could get it done,” she said.

Flores beams as she rattles off her professional development thus far. She’s designed a T-shirt and is mastering Adobe Illustrator. “I’ve learned a lot about how to cut and trace and how small businesses work and about the upcycle stuff,” she said before smoothing out a wrinkled piece of cloth.

There’s a growth that students such as Flores gain “through their classes and by learning about themselves in work environments,” Joy said. “It’s something that eludes description, but you can see it — a shine that’s pretty special.”