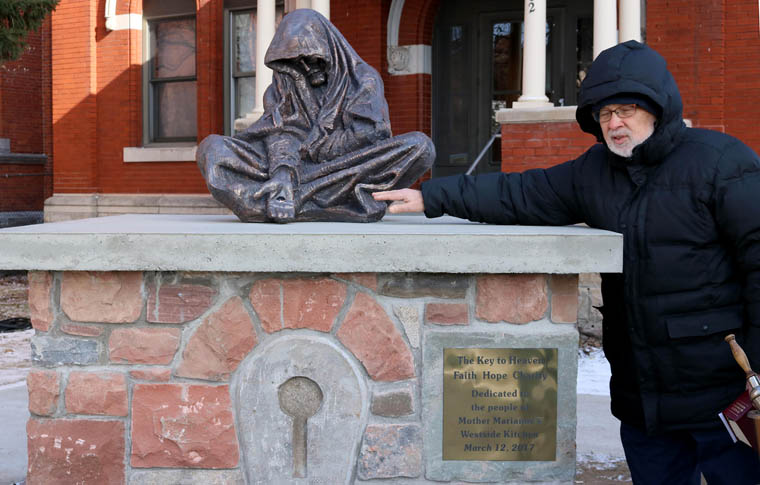 Artwork in Utica based on Gospel of Matthew

That’s how Doris Goff described the sculpture dedicated to the people of Mother Marianne’s Westside Kitchen at St. Joseph-St. Patrick Church in Utica.

It was unveiled at the soup kitchen’s ninth anniversary celebration March 12, perched atop an outdoor stone pedestal.

“I mean, it’s Jesus after all,” Doris said, referring to the sculpture portraying Christ as a homeless beggar.

Pulling the canvas cover from the sculpture, Father Richard E. Dellos, pastor, quoted the words of Christ from the Gospel of Matthew (25:40):

“Amen, I say to you, whatever you did for one of these least brothers of mine, you did for me.”

“We at the soup kitchen try to see the image of Christ in the people we serve,” Stronach told the crowd. “This statue is the embodiment of that.”

“It’s a powerful message,” said John Sullivan, who with his brother built the pedestal from stone recovered from the former St. Patrick’s Church across the street (where an Irish Cultural Center is currently under construction).

Even though she’s a parishioner of St. John the Evangelist in New Hartford, Goff didn’t want to miss the Westside Kitchen celebration, noting that she donates food on occasion.

The sculpture, which is approximately 30 inches high, 28 inches wide, and 27 inches deep, was created by Canadian sculptor Timothy P. Schmalz, who dubbed it “When I Was Hungry and Thirsty.” According to his website, the artwork was inspired by the Gospel of Matthew and is a “visual representation of charity.” He notes that “we need to see Christ in the poor and hungry.”

Soup kitchen Director Edward Morgan noted that it goes beyond feeding the hungry; the operation has become a place of warmth and welcome. “They’re glad to have someone to talk to,” he said. “We try to give them the time to listen. They go out and no one gives them the time of day and they’re looked down upon.”

A guest grabbed Morgan’s attention to chat a bit before leaving. He told Morgan that he has come to appreciate “the joy of living” when “you leave it up to Him.”

After the man left, Morgan noted that “wonderful” volunteers have an impact:

“The charity, the love they show gets reflected back by the patrons who come here. We get a lot of ‘please,’ ‘thank you,’ and ‘God bless you.’ The conduct of the people is unbelievable.

A plaque on the pedestal, next to a keystone (also from the former St. Patrick’s), reads: “The Key to Heaven: Faith, Hope, Charity. Dedicated to the people of Mother Marianne’s Westside Kitchen. March 12, 2017.”

The soup kitchen is named after parish daughter St. Marianne Cope, who grew up in the parish and spent the last 30 years of her life caring for patients with Hansen’s disease (leprosy) in Hawaii.