Second Catholic president causes some to celebrate, gives others anxiety 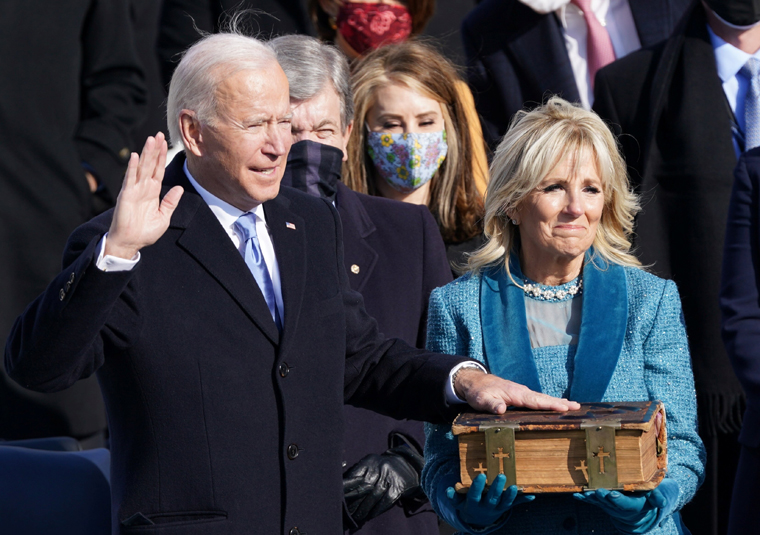 WASHINGTON (CNS) — Joe Biden became the second Catholic to be inaugurated as president of the United States Jan. 20, giving some U.S. Catholics and their religious leaders a reason to rejoice and others to fear more access to abortion under his leadership.

As Biden placed his hand on the Bible and was sworn in as the 46th president of the U.S., Marie Yanulus Calderoni, a Catholic from Spring Township, Pennsylvania, said a prayer for the 78-year-old Delaware resident as he assumed the responsibility of the nation’s highest office.

He becomes president at a time when the country is enduring a deadly pandemic, profound polarization, racial divisions and financial uncertainty.

For as pleased as Calderoni — a 60-year-old parishioner of St. Ignatius Loyola Catholic Church in Reading, Pennsylvania — is to see a fellow Catholic in the White House, she remains troubled by his support of legal abortion.

Many Catholics across the U.S. share her conflicted enthusiasm and Biden received barely half the Catholic vote in the 2020 election.

New York Cardinal Timothy M. Dolan, who read a Scripture passage at President Donald Trump’s 2017 inauguration, wrote in a recent column for Catholic New York — the archdiocesan newspaper — that Biden “speaks with admirable sensitivity about protecting the rights of the weakest and most threatened,” but added the new president “ran on a platform avidly supporting this gruesome capital punishment for innocent preborn babies.”

Emphasizing the rights of the unborn are equal to other human rights, he quoted Pope Francis: “We defend and promote all legitimate human rights. But what use are they if the right of the baby to be born is violated?”

Though many Catholics are celebrating Biden’s rise to the presidency, many U.S. Catholics are fuming over it, mostly because of his support for legal abortion and same-sex marriage, both sins according to church teaching.

Social media is rife with posts from Catholics offended that Biden identifies himself as a Catholic, with some American priests telling parishioners during the 2020 presidential campaign that it would be a sin to vote for him.

A denouncement of Biden’s Catholicism only creates more divisiveness, said Oblate Father Kevin Nadolski, vice president for mission and a professor of education at DeSales University in Center Valley, Pennsylvania.

Catholic scholars argue all humans are flawed and Vatican leaders frequently confirm that anyone who is baptized Catholic is identified as Catholic, even if they have fallen away from the church.

“Even people who would be well disposed to the president find it difficult to (understand how) he can conjugate his stance on (the abortion) issue — which is so important to Catholics — and this faith that has been so important to him all of his life,” said Cardinal Joseph W. Tobin of Newark, New Jersey. “What I don’t understand are people who use very harsh words and want to cut off all communication with the president because of this.”

The U.S. bishops and popes have been in dialogue with all modern U.S. presidents, but it should be easier for Catholic leaders to convey their concerns to a Catholic president who understands the doctrines of the faith, Father Nadolski said.

“I’m very optimistic that our U.S. Catholic leaders — specifically our bishops — can work with President Biden, despite his present position as it relates to abortion,” he said. “Pope Francis has been crystal clear about the need for dialogue.”

Biden faces an overwhelming agenda at this period of time and Catholics from the ranks of church leadership to those in the pews should offer their prayers to help guide him, Cardinal Tobin told Catholic News Service.

The inauguration should also be a moment of celebration among the faithful to see the second Catholic president take the oath of office, whether they supported his candidacy or didn’t, Father Nadolski told CNS.

It’s significant that only two of 46 presidents have been Catholic and some have expressed hope that Biden’s election means another prejudice has been overcome.

The U.S. electorate had been suspicious of Catholic presidential candidates throughout the 20th century, fearing they would be unduly influenced by the pope, a notion that President John F. Kennedy — the first Catholic to serve as president — rejected by proclaiming he would keep his faith life and role as public servant separate.

Though Cardinal Tobin doesn’t expect Biden to take orders from Pope Francis, he does anticipate he will employ the guiding principles of Catholic social teaching to usher him through the health and financial crisis brought on by the COVID-19 pandemic, healing the wounds following the Jan. 6 insurrection at the Capitol, trying to unify the country amid political and racial divisions, and working for immigration solutions.

A man who often calls on his Catholic faith to guide him through the challenges of his life is uniquely suited to lead the U.S. in this turbulent era, said Father Nadolski, who is pleased Biden has signaled he will address the festering problem of institutional racism in the U.S.

“Pope Francis reminded us this summer that there is no way that anyone of us as Catholics can advance the dignity and sacredness of human life if we are in fact racist,” he said.

“Because of Joe Biden’s commitment to Catholic social teaching — both his sensitivity and sensibilities — I think it’s high time for us to have a very productive, proactive and Gospel-grounded conversation on race in our nation,” Father Nadolski said, “especially as we’re emerging from the past four years where there have been accusations and real questions around race in our nation in a way in which our leadership at the time has addressed them.”