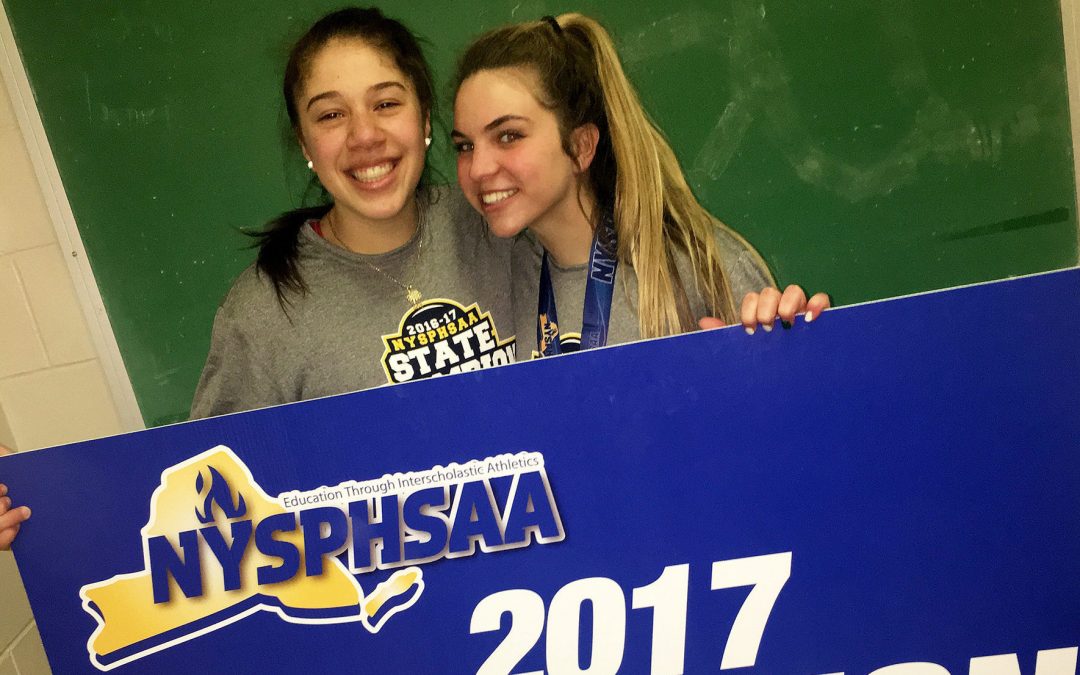 When the bus carrying the Seton Catholic Central High School girls basketball team hit the Binghamton city line, the police showed up. Not to worry: The officers were there to give the team a glorious escort back to the school for winning the state Class B championship.

The Saints, of Section IV, overwhelmed Irvington, of Section I, 86-67 on March 18 at Hudson Valley Community College. Irvington was No. 2 in the most recent rankings by the New York State Sportswriters Association, and Seton was rated No. 3.

Now the Saints have a shiny plaque to prove they’re really No. 1 in the New York State Public High School Athletic Association, and next up was installation of the championship banner for the gymnasium.

“I guess I just realized that we’ve been working so hard for this the whole year and I wanted to make some shots and come up big for my team, and that’s what I did,” Strawn said.

Strawn led all scorers with 26 points and won the tournament’s MVP award.

“It was just an amazing feeling, and my teammates and I had worked so hard for this, and we finally got it,” Strawn said. She added that the Saints were even working toward the title in the offseason.

“They’re like my family,” Strawn said, “and I couldn’t be any prouder of them. And we all did it together, all 14 of us. Even though I am the MVP, I couldn’t have done it without them and I owe everything to them.”

In the 79-54 semifinal victory over Beekmantown on March 17, McCann hit three 3-point shots in the first 90 seconds. In the championship game, Strawn said, McCann “hit two 3’s that just set the tempo and the pace for the whole game.”

“We watched them the day before and we knew they were a really good, solid team,” Strawn said, but the Saints also knew they could win if they played as a team. “We played for the front of our jerseys, not the backs,” she said.

“At halftime,” Strawn said, “we just said that we needed to be a little bit more intense and come together and play our game. … We started getting the ball inside more to Marina and Julia, and the outside opened up. I was being guarded by No. 15 (Lindsay Halpin, 24 points) on other team; late in third quarter I realized she had four fouls and that I needed to take her to the basket … because I knew that either she would foul out or I would take it to the rim and get two points for my team.”

Strawn acquired memories that she said she will never forget.

“We drove back on the bus, and we were all really excited,” she said, “and once we crossed the city line in Binghamton we got a police escort back to school. And the mayor met us at school, congratulated us, and we got a picture with him, and our principal was there. A lot of family members and friends. Huge fan presence at both games (including the semifinal victory). It really motivated us and got the crowd going.”

The pro-Saints crowd made a “huge difference, just hearing them cheer,” she said, and it “helped us win both games.”

Another of her favorites is her dad, Phil, who roots loudly for Seton.

“They played great,” Phil said. “They got great support. I thought the school and the students’ fan club was very, very supportive and very behind them, which was big.”

Phil said two buses hauled fans to Troy. Attendees included players from the past, including the Seton championship team of 2005.

The final this year, he said, pitted two teams that like to run against each other, “but we outrebounded them. Our combination inside and outside was big. They couldn’t really match Marina and Julia.”

“They were a great team, they’re used to winning,” he said of Irvington. “They were a very good, well-coached team. I just think to run up 86 in the championship game was pretty impressive. It’s hard to outscore that kind of offense.”

Halpin was hard to guard, like Bishop Ludden’s Danielle Rauch, Phil said, but because Halpin picked up her fourth foul, Hanna was able to take her to the basket. Halpin never fouled out, but she had to play more tentatively on defense, Phil said.

Next up for Seton is the state Federation Basketball Tournament of Champions at 5 p.m. March 24 at the Glens Falls Civic Center. Seton will take on Holcombe L. Rucker, the New York City Public Schools Athletic League champion.