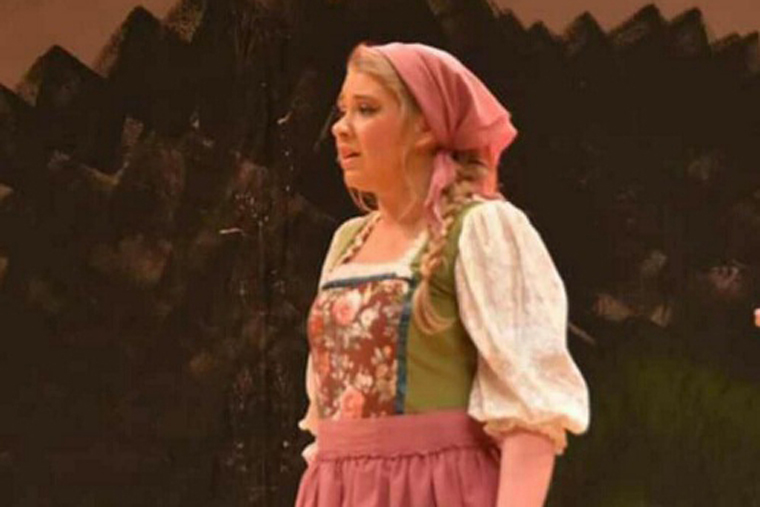 “You can tell when someone is maybe a little inexperienced when working with Shakespeare when they try to make everything huge,” said CBA English teacher Todd Benware. “Everything is big, and it doesn’t need to be, because the language is big enough; you don’t need to be running around the stage and have your arms outstretched for the whole speech.

“The language and the poetry and the imagery will convey a lot of that for you, and you just kind of [have] to follow it. He gives you this great template, you just gotta follow along with it and it can bring you places, and she understands that, I think.”

That student is junior Emilee Edick, who has been working with Shakespeare for only a couple of months, although she did get deeply into Shakespeare in a program last summer. Using her naturalness and her experience in many other dramas and musicals, she won CBA’s Shakespeare competition and then Central New York’s high school title, which put her into the top 49 in the 2020 English-Speaking Union National Shakespeare Competition. (All 49 performances are available on YouTube; Emilee is No. 42.)

“When I found out I won,” she said of the CNY competition, “I was very excited.”

Typically, 18 to 20 schools participate in the CNY competition at Syracuse Stage and the winner goes to the nationals in New York City, where the actors all compete on the Lincoln Center stage; they are feted and treated to tours of Manhattan. But due to COVID-19, all performers submitted videos for judging this year and the NYC trip was out.

In her living room, Emilee, who is praying for a career in theater, filmed Shakespeare’s Sonnet XI and a monologue by Phebe, a character in “As You Like It.”

The sonnet includes these lines:

“As fast as thou shalt wane, so fast as thou grow’st/In one of thine, from that which thou departest;/And that fresh blood which youngly thou bestow’st,/Thou mayst call thine when thou from youth convertest./Herein lives wisdom, beauty, and increase.”

Phebe, Emilee said, is “just a very funny character, and I have a lot of fun.” She considers Phebe “a little bit of a flirt” and “kind of a drama queen.”

Emilee said she learned about wording and different expressions and hand gestures for the competition from teacher Benware — “very helpful throughout a lot of it.”

“It’s very flattering, but she’s the one with all the talent,” he said. “I really didn’t have to do much.”

Benware was speaking on what is considered to be Shakespeare’s birthday, April 23. “There’s no definitive paperwork that says he was born on the 23rd,” he said, “but his birth certificate was filed in a Stratford church on April 26,” and the custom of the time was that birth certificates were filed three days after birth. Also, it is factual that Shakespeare died on April 23, Benware said.

He teaches a Shakespeare class for seniors, a ninth-grade English class, and a creative-writing class. He gave credit to others who have worked with the drama students, including the retired Gene Moretti, who was a longtime English teacher and director of CBA’s Fall Drama and Spring Musical programs, and Robert-Michael Calimlim, who is the school’s current drama and musical director.

In about the past five years of the CNY Shakespeare competition, Benware said, CBA has had two first-place winners, an honorable mention, and a third place, “so the kids have really risen to the occasion, it’s been great.”

In 2006, Benware won a fellowship from the Syracuse Branch of the English-Speaking Union of the United States. For three weeks he lived in London and even performed scenes from Shakespeare’s “Coriolanus” at the Globe.

“It was great!” he said. “It was a really unique experience; it was scary, but it was great. I think you have to do it a little bit yourself in order to teach it a little, but … I’m not an actor by any means, I’ve never done anything professionally. … But just being over there for those three weeks immersed in it, it gives you the tools you need to convey it to the kids.”

He added: “If you can just get the kids excited about the material, then that goes a long way in getting them to understand it and learn it, so that’s why we try not to sit around too much, and we’re up doin’ it.” Yes, in his class, they stand up and recite Shakespeare out loud.

Benware said he and Emilee had discussed the technical aspects of approaching a monologue or delivering a sonnet, and the “subtle differences between the two: “A monologue is more performed, and a sonnet is more delivered. In the sonnet you rely more on the language to convey the emotion, and in a monologue you’re more free to use your body and your voice, facial expression, and to let the lines breathe a little bit.”

‘A sense of delivery’

Some kids, he said, just have “a sense of delivery.” He feels the actor must “unlock a little key” and understand that Shakespeare is writing in iambic pentameter: Learn to read through a line and not pause where there are no pauses. Shakespeare’s characters are “such real people,” he said, that the actor must not try to “bring them to life unnaturally.”

“She’s such a talented kid,” he said of Emilee, “there wasn’t a whole lot I had to tweak; it was just like, well, maybe a little less of that emotion here, a little more of this emotion here; and she’s such a great student, she’s like a sponge — it was one piece of advice, and then, bang, she was off and running with it, and it was like, You did it! That’s it!”

Benware hopes that Emilee can win the ESU’s CNY competition again in her senior year, because she missed out this year on all the extras of competing in Manhattan. “I don’t see any reason why she couldn’t, because she’s really a tremendous talent,” he said.

Asked how audiences react, Emilee said, “I get a lot of compliments which just brighten up my day.”

Like all her classmates, she is doing digital learning — “still very active, still learning new things. … I hope for all my senior friends that we can go back and [have] senior moments that they’ve been looking forward to.”

She certainly has had her junior moments.