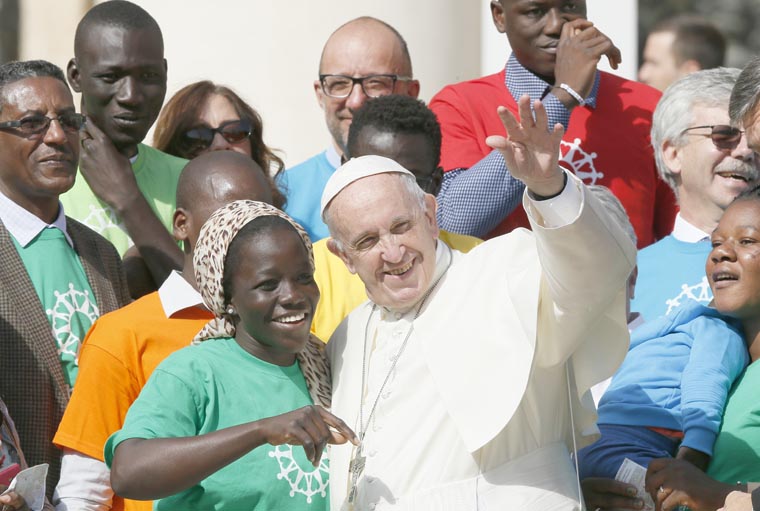 Christians’ embrace of people fleeing war or poverty should be “a bit like the colonnade of St. Peter’s Square, which represents the mother church who embraces all in sharing a common journey,” the pope said at the end of his weekly general audience Sept. 27.

With hundreds of refugees and migrants present in St. Peter’s Square, Pope Francis said the Catholic charities’ staff and volunteers who assist them are “a sign of a church that seeks to be open, inclusive and welcoming.”

“Share the Journey” is a two-year campaign sponsored by Caritas Internationalis, the global network of national Catholic charities — including the U.S. Catholic Relief Services and Catholic Charities USA — to promote encounters between people on the move and people living in the countries they are leaving, passing through or arriving in.

Philippine Cardinal Luis Antonio Tagle of Manila, president of Caritas Internationalis, told Catholic News Service, “‘Share the Journey’ is not just a title or a label for a program — it is that, but more than that, it is a lifestyle,” an affirmation that everyone wants and needs someone to share his or her journey through life.

“There are specific moments in the life of a person, a family or the whole human family when we need to be reminded of this fundamental truth that we have been given each other so that we would have someone to share our journeys with,” he said, the day before the campaign launched.

In his ministry in the Philippines and traveling around the world for Caritas, Cardinal Tagle said he has come to realize that “we don’t need to do great, extraordinary, extravagant things to make a difference in the lives of people.”

Rather, he said, “small gestures, ordinary gestures, when done with sincerity, with the light of human understanding, with the fire of love can do extraordinary things.”

The cardinal said it is important for himself and for all Christians to look not only at the gestures of care and love they extend to others, but to recognize how “I have been assured and encouraged by little gestures that people have extended to me with sincerity and love.”

One key point of the “Share the Journey” campaign, Cardinal Tagle said, is to help Catholics and others take positive steps to get to know the truth about the current refugee crisis and to actually meet a migrant or refugee in person.

“Fear comes first from the unknown,” he said. “Many people who are against migration or receiving migrants have not even met a real migrant or a real refugee, have not even touched the hand of someone forced to flee a war, have not even smelled the misery of these people. So we wonder, ‘What are you afraid of? Where is this fear coming from?’”

Lasting impressions can come from the experience of meeting, talking to and sharing even a moment of the journey with a migrant or refugee, the cardinal said.

For him, the refugee who stays in his mind, heart and prayers is “a teenager, a young boy who we encountered in the refugee camp in Idomeni, in Greece,” in late 2015. He was from Syria and he was alone after his parents urged him to escape the country.

“You know, whenever I think of this boy, I feel anxious, but I pray for him,” the cardinal said. “And you just hope there are men and women of good will who will see in him a son, a brother, a neighbor and will share his journey.”

Sister Norma Pimentel, a member of the Missionaries of Jesus and executive director of Catholic Charities of the Rio Grande Valley in Texas, joined Cardinal Tagle for the audience with Pope Francis.

“‘Share the Journey’ is the opportunity for all of us as church, as the people of God, to walk with and be part of that journey that the immigrants are going through,” she told CNS. It is an opportunity to tell migrants and refugees they are not alone. “We are saying, ‘We are with you and we want you to know that we will always be with you and care for you.’”

Families who “had gone through so much pain and suffering through all their journey” suddenly come to a place where they are welcomed and the expressions on their faces change, she said. The encounter enables them to “experience the presence of God among us just by, at that moment in their journey, finding somebody who cares.”