Sister Jean: on the sidelines and in the spotlight 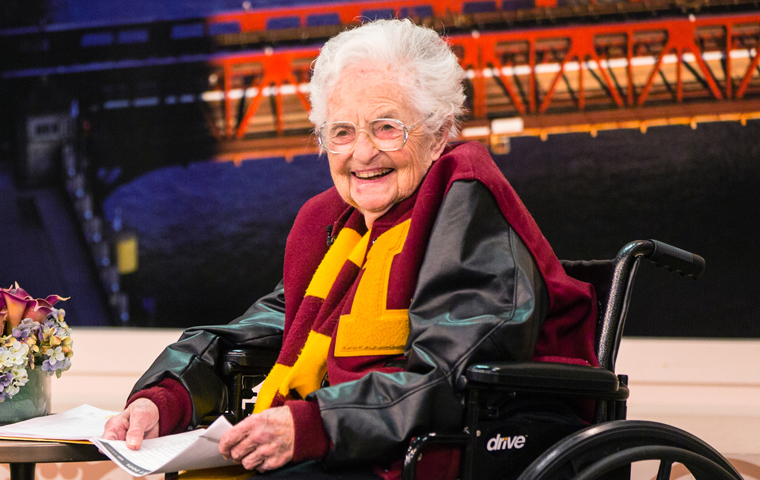 It is no secret that we here at the Sun LOVE women religious. Whether they’re ministering in a parish or at a school or in a loving home for the dying or to “outcasts” or to the whole internet at large, we are constantly amazed by and thankful for their faith, their strength, and the witness of their lives. We. love. them.

So of course we are just as captivated by Sister Jean Dolores Schmidt, the 98-years-young chaplain of the men’s basketball team at Loyola University Chicago, as everyone else. A member of the Sisters of Charity of the Blessed Virgin Mary, Sister Jean has shot to international fame since her team made it to the big dance. After some truly heart-stopping wins, the Loyola Ramblers have advanced to the Final Four, where they’ll take on the University of Michigan Wolverines this Saturday.

Here’s a roundup of some of our favorite features on Sister Jean.

From the Jesuit Post: An interview with Sister Jean

From our friends at Chicago Catholic: Loyola’s living legend inducted into hall of fame

From The New York Times: A Day in the Life of Sister Jean, Media Darling

And no matter who you’re rooting for this weekend, here’s a prayer you can offer for your team, courtesy of Sister Jean:

In the pregame prayer, “we asked God to help us and I told God that we would do our part if he would do his part,” she said. “And I (prayed) the referees would call the right kind of game, that nobody would get injured, that we’d play with confidence and … we’d win the game, and then at the end when the buzzer rang, we’d want to be sure the score said we had the big ‘W.'”