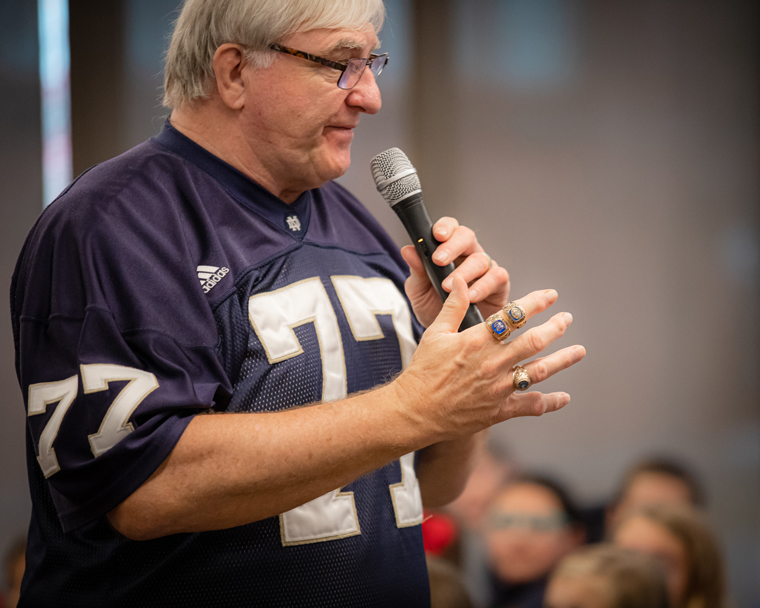 The skit was simple. It involved four empty chairs, McCoy, and one of Cuffee’s trusted friends, Lucille Keegan. Three chairs represented “landmines,” or destructive hurdles that can prevent you from living a Christ-filled life: sex, alcohol, and drugs. The fourth chair symbolized a person’s goal or dream for their life. The chairs were placed like an obstacle course, and Cuffee, who was blindfolded, had to rely on her listening skills. While Keegan’s directions were spot-on, McCoy played the voice of distraction as Cuffee pressed desperately toward her goal.

“It was really hard to focus on more than one voice at a time, and as a teenager, it kind of showed you what it’s like to go through high school and have to deal with peer pressure,” Cuffee said.

McCoy last week visited Catholic schools across the Roman Catholic Diocese of Syracuse. His objective is to reach the younger generations with a faith-based message of faith, hope, and encouragement which will, in turn, enable them to make better decisions in their lives. 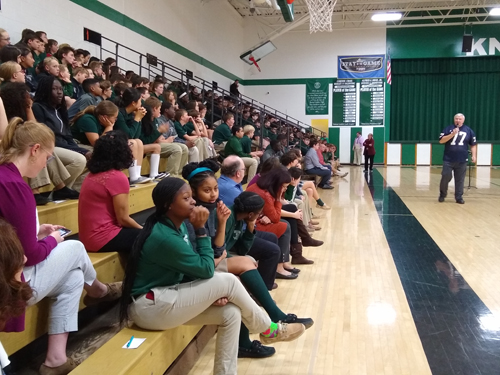 “I think a lot of them are encouraged,” he said of the students after hearing him speak. Much of the feedback he receives comes through notecards that are given out at the end of the presentation. This is an opportunity for kids to open up confidentially and express any troubles they may be enduring. When deeper issues are brought to his attention, his ministry intervenes.

“We had over 340 students turn in cards actually saying they were contemplating suicide,” McCoy said. “Our culture is destroying our young people today.”

Bishop Ludden vice principal Mike Morgan commended McCoy for his down-to-earth, relatable approach when speaking. With humor and audience interaction, McCoy spoke of his own tough upbringing and the challenges he endured and eventually overcame.

When asked about her thoughts on the presentation, Bishop Ludden guidance counselor Kristin Schoeneck was clearly moved. She was reminded of Patty Schramm, a long-time and beloved Ludden counselor who died in January 2018.

“In my six years working with Patty, she passed on to me her mantra that all people, not just kids, need to be authentic, live their truth, and own their own mistakes,” Schoeneck said. “We work with students on an individual basis to help students understand that their fate is always in their hands by their actions and reactions to circumstances in their lives. This certainly coincides with Mike’s message.”

“All decisions have outcomes, whether good or bad. But we also want [the kids] to know that their decisions won’t define them and with a loving community at home and here at Ludden, we can help them navigate the landmines in life they encounter,” he said. “Some days that’s easier than others, but they know that we are there for them and that God is on their side, as well.”

McCoy became involved in ministry six years after his NFL career ended, though his faith developed long before. It was during his time as a pro football player that he chose to open his heart to Christ.

“When I made that decision, my faith became alive,” he said, adding that he always ends his presentation with a quote from Pope John II that reflects this exact act — to welcome Christ and accept His power.

Over the years, McCoy has been a speaker for the National Catholic Educators Convention, Catholic Men’s Rallies, Bill Glass Ministries in prisons and to parents and coaches through the Notre Dame Play Like a Champion program. He speaks primarily in Catholic schools across the United States, and abroad. McCoy founded his ministry in 2011. For more information about his work, visit www.McCoy77.com.