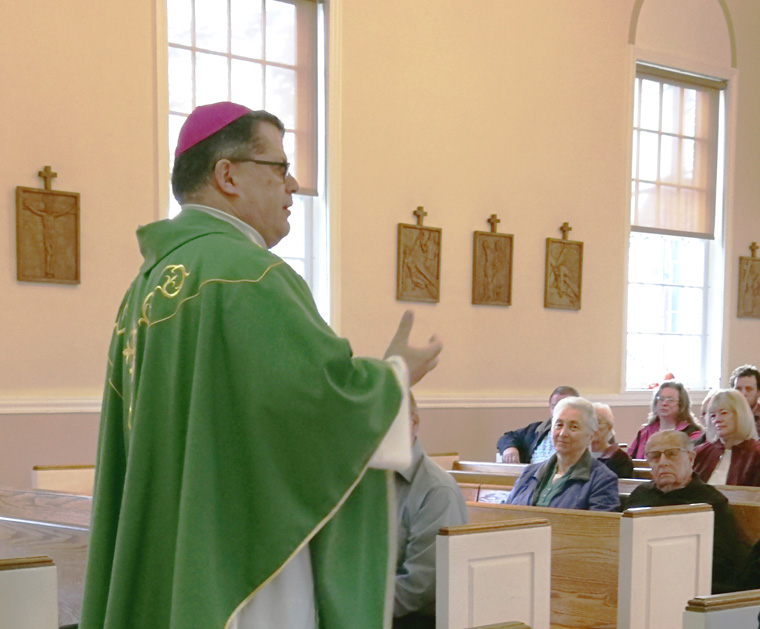 AFTON — St. Agnes Parish recently marked the 70th anniversary of the faith community’s founding and the church’s dedication with special Masses, events, and a visit from Bishop Douglas J. Lucia.

For many years, Catholics in the area attended Mass in Bainbridge, Deposit, Greene, or Sanitaria Springs. On June 9, 1946, with Father Charles Dee as pastor, the first Mass for St. Agnes Parish was said in a house on North Main Street, then owned by the Afton Grange. Eighty-six people were in attendance.

When it was found that large numbers continued to attend, arrangements were made to hold services in the Village Hall, beginning on July 14. Through the generosity of the Afton Home Bureau, use was given of a room on the second floor where vestments and supplies could be kept. Mass was celebrated in the assembly hall on the ground floor.

On June 14, 1946, a women’s organization, the St. Agnes Guild, was formed. The Guild has been a source of spiritual inspiration and information as well as working for fundraising activities. Guild members have taken care of arranging the altar and caring for altar linens and equipment. Some of the first altar linens were even made from fine Irish household linens donated by the women.

Father Dee was replaced in June 1948 by Father Edward A. Goulet and plans were started for a church building. In anticipation of this, a fund had already been established in the name of St. Agnes Church. The name of St. Agnes for the Afton parish commemorates a famous young Christian girl who was martyred for her faith by a pagan Roman emperor on January 21 in the year 304 and whose emblem, the lamb, would seem especially appropriate for a farming community.

Plans for a church of colonial design were drawn by Arthur Lacy and Sons and the contract awarded to F. & K. Lewis Inc. of Afton at a cost of $45,000. Seating capacity is about 160 persons.

Ground for the new church was broken on April 15, 1949 — Good Friday — on a lot at the corner of Spring and Academy Streets, donated by Dr. Carlton Hayes and Dr. William Crull, the first trustees.

The groundbreaking ceremony was attended by many of the business and professional people of Afton, a situation typical of the friendly interest and help that has been extended to the Catholic congregation by members of all the other churches in town. This cooperation coupled with generous donations from many friends from out of town as well as of the parish itself had provided a fund adequate to go forward with the construction of the church.

On Oct. 1, 1949, the first Mass was celebrated in the new church and all the boys and girls who were to be confirmed the next day, as well as many others, received Holy Communion. On Oct. 2, Most Rev. Walter A. Foery, Bishop of Syracuse, dedicated the church and Father Goulet celebrated the Mass. Immediately after Mass, Bishop Foery confirmed a class of six boys, 12 girls, and nine adults.

Of particular interest to visitors to the church are the wood carvings and an original Rembrandt etching, “Descent from the Cross.” The etching, which is above the door, was a first of Dr. and Mrs. George Bennett. The wood carvings include a large crucifix above the altar; an Agnus Dei on the front of the altar; the statues of Christ the King, the Blessed Virgin Mary, St. Agnes, and St. Joseph; and the Stations of the Cross, representing the events connected with our Lord’s crucifixion. These hand carvings are the work of the widely known sculptor Harry E. Donohue of Ossining, N.Y.