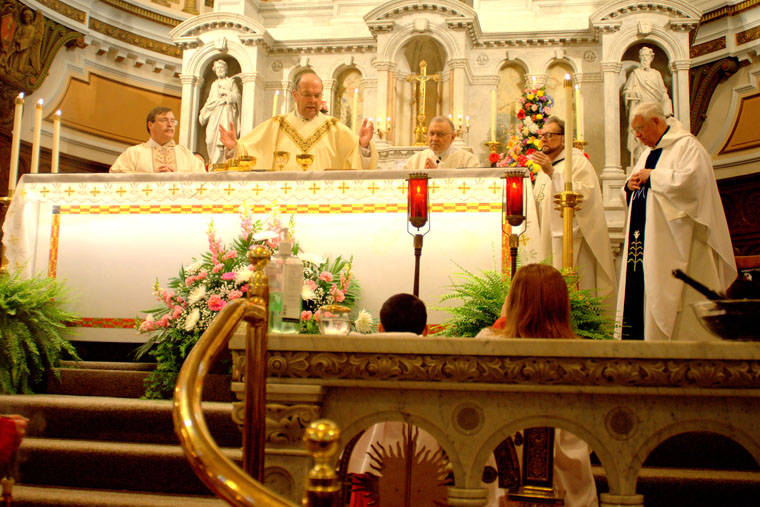 The spirit of hometown saint Marianne Cope permeated St. Joseph and St. Patrick Church in Utica May 1 as Bishop Robert J. Cunningham presided over a Mass to celebrate the parish’s 175th anniversary.

Bishop Cunningham quoted Pope Francis’ observations on the value of remembering history and celebrating anniversaries, particularly in a religious context: “The believer is essentially ‘one who remembers.’”

The celebration was not about buildings of brick, wood, and stone, but about faithful people of action, past, present, and future, who, according to Bishop Cunningham, were the “living stones” comprising their real essence.

The day was a celebration of past and current faithful “too numerous to count,” according to the bishop. So many have had their lives touched, inspired, and shaped since the parish’s official history began with two marriages celebrated in November of 1841.

The two churches merged in 1966 and St. Patrick’s was later demolished. The sacrificial altar and statue of St. Patrick were moved into the St. Joseph sanctuary upon the merging. The cornerstone from St. Patrick’s sits next to the Mother Marianne’s Westside Kitchen and has been donated by Father Richard Dellos for incorporation on the grounds of the new Irish Heritage Cultural Center being built on the site of the former St. Patrick’s Church.

The volunteer staff and supporters of Mother Marianne’s Westside Kitchen, who have served more than a half million meals since its founding eight years ago, received honors, as did parishioners involved in fundraisers, faith formation, and communications. Men and women religious of Franciscan orders, who had run the schools and lived at the St. Joseph facility, received special emphasis and gratitude from the bishop.

Among the vast numbers of those served by and serving St. Joseph’s and St. Patrick’s throughout the years stands one saint. Bishop Cunningham noted that the fact made St. Joseph and St. Patrick the only parish in the Syracuse Diocese to have produced a canonized saint.

Statues, a shrine, memorabilia, and relics of St. Marianne Cope are seen almost everywhere in the St. Joseph and St. Patrick buildings and grounds. Her living memorial, Mother Marianne’s Westside Kitchen, serves those in need from the parish center on a stretch of Varick Street, which the City of Utica renamed “Mother Marianne Way.”

Her canonization on Oct. 21, 2012, brought great joy and inspiration not only to St. Joseph and St. Patrick Parish, but also to the entire city of Utica.

The May 1 Mass also featured musical performances by the youth choir led by Jennifer Barnard and the Utica Maennerchor chorus directed by Gail Miller.

New York State Senator Joseph Griffo read a resolution of the N.Y. State Senate noting the significance of the 175th anniversary of the parish and its importance in the local community, adding that the resolution was passed unanimously, a rare gesture, he quipped.

Oneida County Executive Anthony Picente, Jr. followed Griffo’s announcement with a proclamation stating that he had officially declared Sunday, May 1, to be St. Joseph’s and St. Patrick’s Church Day in Oneida County.

The post-Mass luncheon at the Radisson Hotel, emceed by John Sullivan, Jr., was themed “The Long and Winding Road” and featured a slideshow history of the parish composed by Deborah Sullivan.

Local historian Frank Tomaino related the founding of the parish, noting that in the early 19th century, Catholics of German descent in the Mohawk Valley cried out for priests and a church of their own German culture and language so they could hear homilies in their mother tongue and confess their sins effectively to priests speaking their own language. Until they could have that, church attendance and adherence to the requirement of and benefits from confession were lacking. Founding the St. Joseph’s Society, their appeals for help were answered by the New York Diocese and the purchase of the first church from a Methodist group was authorized by the trustees in 1840.

Father Dellos looked into the future of the church, commenting that “we are standing on the shoulders of giants,” the parish founders, and reminding parishioners that the 200th anniversary of the parish is just around the corner.

Tom Loughlin, Jr., is a convert, a freelance photographer/writer, and a parishioner of St. Mary of Mt. Carmel/Blessed Sacrament Church in Utica.

Historical material for this article was drawn from “175th Anniversary History of St. Joseph and St. Patrick Church” by Robert Stronach, OFS, and church historian Richard Dukette III, and the parish history page at stjoestpat.org.