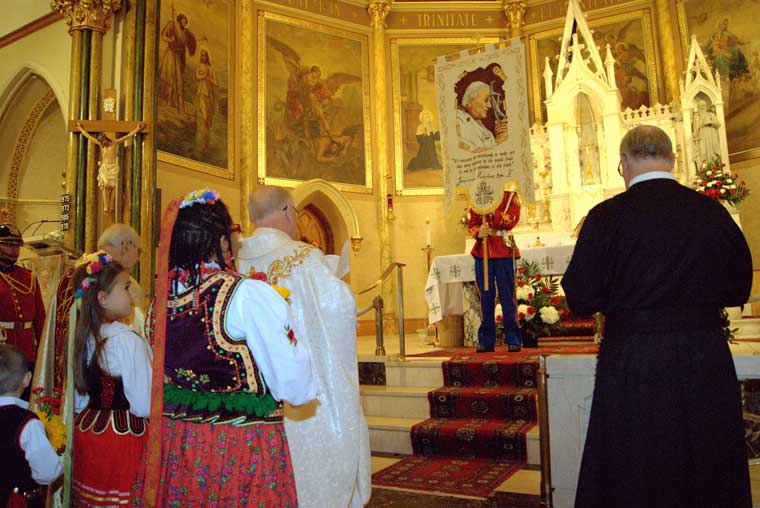 UTICA — Rainy weather may have dulled the autumn foliage outside of Holy Trinity Church around the statue of St. John Paul II Oct. 22, but his feast day was vibrant inside at a special Mass. Father John Mikalajunas, Holy Trinity’s pastor, welcomed the attendees saying, “St. John Paul II sent holy water from heaven, a lot of holy water, so we will be praying inside today.”

Rather than a candlelit procession to the statue which was erected in 2015, children in traditional Polish dress proceeded up the aisle, celebrating the cultural heritage they have in common with the saint. The sight brought an accent of color to the quiet church. Against a backdrop of crisp white shirts and black vests, red punctuated the outfits while bright skirts of different printed colors brushed the pews as little ones processed to the altar. Flowers adorned their hair in festive, beribboned wreaths and small hands clutched contrasting red carnations and sunflowers.

“Boys and girls, you look beautiful and handsome today. St. John Paul II would be very happy because he loved children,” said Father Mikalajunas as he welcomed them.

In the homily, he told parishioners that St. John Paul II served as pope for 26 years, five months, and 17 days.

During this time, he said, the pope traveled to at least 110 different places with his message for everyone to love Jesus. Father Mikalajunas noted that when the pope disembarked from airplanes, he would get down and kiss the ground in these countries because he was happy to be there to be able to tell the people about Jesus.

“He would say I know of your generosity, but tell people about Jesus. There are people we meet and who are our neighbors who don’t know about Jesus. Tell them,” said Father Mikalajunas. At the conclusion of Mass, a special litany was offered to St. John Paul II.

Brother Leonard Wojtanowski, CFX, a parishioner at the Mass said, “In 1978, Karol Wojtyla became the first non-Italian to be elected pope in hundreds of years. Quite shocking at the time,” said Br. Leonard. “But immediately in this parish and probably in every Polish parish there was great happiness and immense pride that ‘one of our own’ was elected as the 264th successor to St. Peter. To this day, we feel continued admiration and dedication to ‘our’ sainted pope, so it’s only fitting that we go a bit out of our way in celebrating his feast day.”

On a bit of triangle-shaped lawn, curbed in by intersecting Utica streets, St. John Paul II’s statue stands sentry facing the doors to the church. Brother Wojtanowski said the scrap of once-paved parking on Lincoln Ave. was deemed a safety hazard by the City of Utica, but Father Mikalajunas asked the City of Utica for permission to maintain the space and beautify the neighborhood where the statue now resides. Father Mikalajunas said the concept of the statue arose after unsuccessful attempts to ask the city to preserve the former parking spaces used by parishioners.

Father Mikalajunas said that if the monument is not the only one of its kind bearing the saint’s engraved signature, then it is likely one of very few that exist. The signature at the statue’s base was taken directly from a blessing originally signed by Pope John Paul II. Father Mikalajunas received this blessing as a gift.