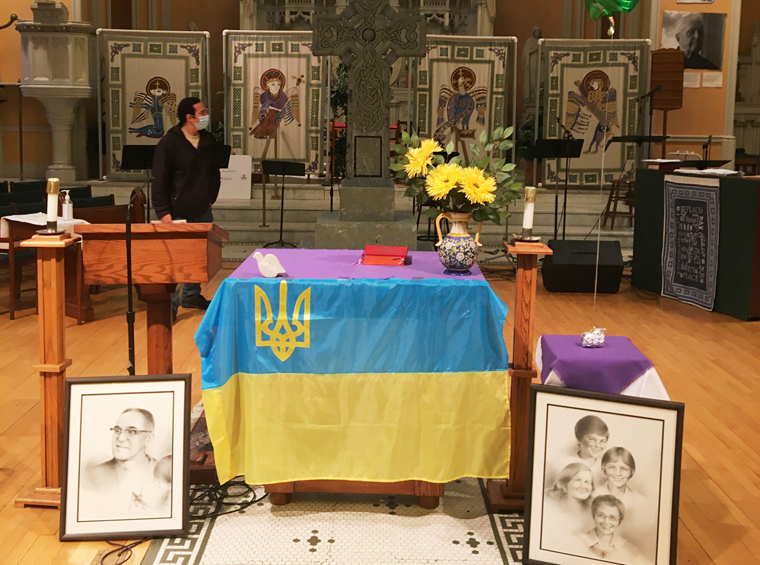 There are many and varied designs that go into creating a float for the annual St. Patrick’s Parade in Syracuse. Like most parades, floats are adorned with everything from shamrocks and leprechauns to Irish flags and live portrayals of St. Patrick. In preparation for the 2020 parade, St. Lucy Church, located just a few blocks from downtown Syracuse, created a float with a unique and significant element of Irish history that coincided with the parade theme that year—“A picture is worth a thousand words.” However, due to the pandemic, the parade was canceled and participants and spectators waited two years before the parade resumed in 2022.

When the 2020 parade committee at St. Lucy’s began brainstorming for a theme, longtime parishioner Greg Stack volunteered to construct something that would be an extravagant gesture and make an impression. He created the most frequently reproduced images from the Book of Kells, folio27v—the symbols of the four evangelists, Matthew, Mark, Luke and John. The disciples are represented by four winged creatures—a human figure for Matthew, a lion for Mark, an ox for Luke and an eagle for John.

The Book of Kells was executed by several monks around the year 800 A.D. It is housed at the grand library at Trinity College in Dublin. The book is an illuminated Gospel book in Latin, containing the four Gospels of the New Testament that are the very best of early medieval illuminated manuscripts.

“The Book of Kells offers us a visual glimpse of the rich, vital and yet unseen world of early Celtic spirituality,” said Stack. “I wanted to produce something that might remind people that there is more to the feast of St. Patrick than green beer and leprechauns.”

Stack said the images had to be clearly visible from the flatbed truck. He constructed 6.5-by-4-foot banners painted on drop cloths. With the help of fellow parishioner Craig Polhamus, the images were projected and enlarged onto each cloth and filled in with acrylic paint. When Stack was creating the banners, he knew they would have to withstand potential rain and inclement weather. The weather for the 2022 parade indeed tested the durability of the banners with several inches of snow accumulation and gusty winds.

The theme completed two years ago had to blend with this year’s parade theme—“Dance through Downtown.” Representing the four evangelists, four patterns of Celtic knots ornamented the boarders of the banners. Celtic knots symbolize unity and external spiritual life. Like so many Irish-inspired designs, Celtic knots and crosses are evident in the costumes of Irish dancers as another form of artistic expression and a way to promote Irish culture. “The imagery of the high cross and Celtic knots used in the Book of Kells was another example of the significance of Irish symbols,” explained Polhamus.

Stack does not consider himself an artist. “I only aspire to be a good artisan or craftsman and try to adapt and execute the work of other people the best I can.” It is that cooperative spirit that resulted in a successful collaboration with Polhamus, who also contributed his skill and talent to the design.

Inspired by the Celtic cross his grandfather Frank Adam Boll carved in 1906 for Stevens Institute of Technology in New Jersey, Polhamus recreated the cross from scrap lumber and Masonite. The 10-foot-high cross was hinged so it would fit under the bridges along the parade route. “It was an engineering challenge,” said Polhamus. “The finished work came out better than any of us could have imagined.”

The parishioners of St. Lucy’s were proud of their unique float and were impressed by the detailed work involved in creating it. “I couldn’t believe that Greg designed such a beautiful rendering of the symbols of the four evangelists,” said Father Jim Mathews, pastor of St. Lucy’s. “He did a wonderful job. They are prominently displayed in the church.”

Stack and Polhamus said that even though the project took a great deal of time and hard work, the pride and enthusiasm shown by parishioners and parade-goers outshined the hours of labor and engineering involved.

“Even though the St. Patrick’s Day parade is a celebration of our Irish heritage, all our friends and community members join in the celebration,” said Polhamus. “By sharing historic, iconic artwork from the Book of Kells, we are able to share the rich history of Christianity.”