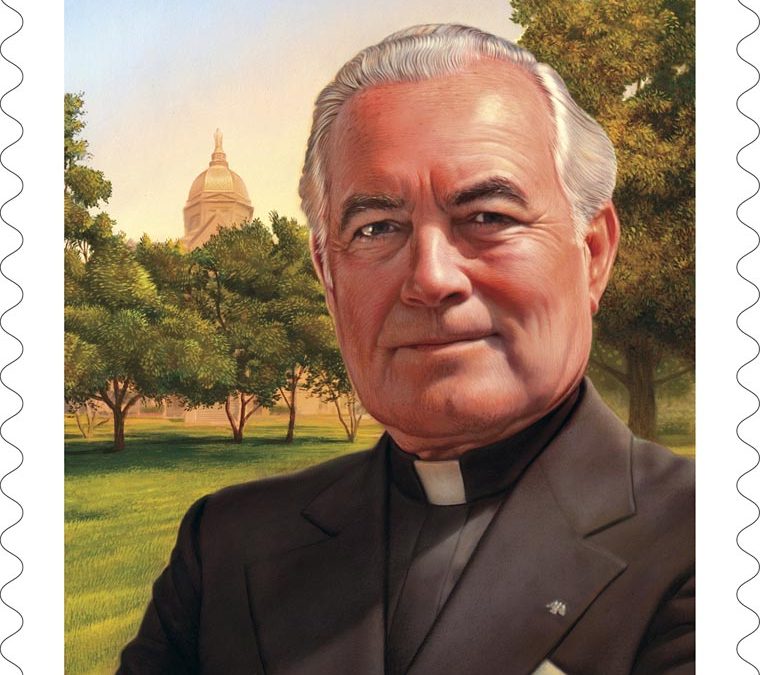 SOUTH BEND, Ind. (CNS) — A postage stamp honoring Holy Cross Father Theodore M. Hesburgh, president of the University of Notre Dame from 1952 to 1987, was issued during a ceremony at the school Sept. 1.

Digger Phelps, a former basketball coach at the school who once served on the Citizens’ Stamp Advisory Committee for the U.S. Postal Service, was master of ceremonies.

The stamp honors Father Hesburgh, who was born May 25, 1917, in Syracuse, New York, for his role as an educator and his service as an adviser on civil rights, peaceful uses of atomic energy, immigration reform, campus unrest and development in poor countries to presidents from Dwight Eisenhower to George W. Bush.

Brennan called Father Hesburgh a “champion of social justice, an advocate for international aid and an emissary for peace” as he advised presidents and popes “on the tough issues facing people and government.”

She said it was a privilege for the postal service to commemorate Father Hesburgh, who “epitomizes the ideal of service to others, to community and to country.”

“For more than a century, the United States Postal Service has honored Americans who are transcendent, Americans who transcended the place they were born, the titles that they held, the work that they did,” she said.

“To be part of a timeless transmission of the values that we so admire, the values of faith and justice and belief in equality, and not just to tolerate those who are different, but to really admire and embrace them, that transcendence is also a part of Father Hesburgh’s heritage because it is who he was,” Rice said.

The stamp is based on a 1980 photograph of the priest on campus with the school’s iconic Golden Dome in the background.

The 49-cent “forever” stamp comes in two formats: a pane of 20 and a coil of 50. The coil is an experimental format that tests the possibility of issuing stamps in a way to better to meet customer demand.