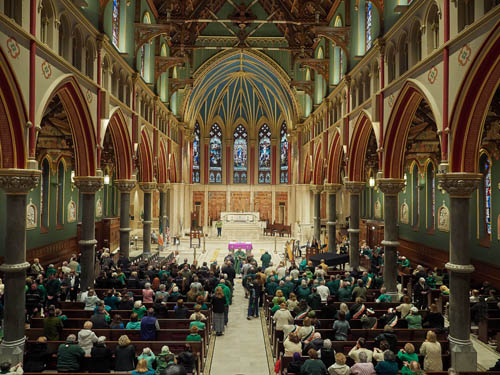 A Mass in honor of St. Patrick’s Day is celebrated March 16, 2019, at the Cathedral of the Immaculate Conception in Syracuse. (Sun photo | Chuck Wainwright)

Syracuse’s St. Patrick’s Day Parade, scheduled for March 14, has been postponed amid coronavirus concerns. Onondaga County and City of Syracuse officials announced the decision at a press conference Thursday morning.

The pre-Parade Mass, scheduled to be celebrated at the Cathedral of the Immaculate Conception on Saturday, will be cancelled.

“The Parade Committee informed the Diocese that the St. Patrick’s Parade Mass, scheduled Saturday, March 14, at 10 a.m., is cancelled due to the postponement of the Parade,” the diocese said in a statement to the Sun.

“All other regularly scheduled Masses in the Diocese will be celebrated unless otherwise notified of unforeseen circumstances,” the statement said.