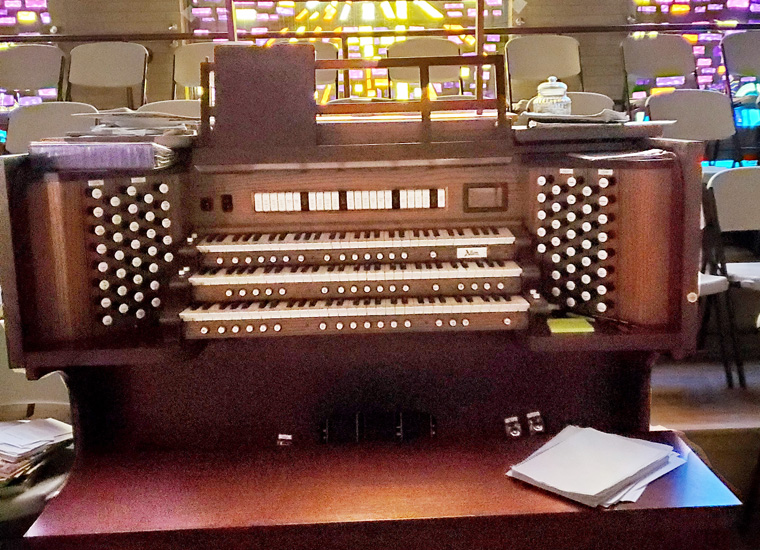 Dominic Fiacco, 14, performed in the dedicatory recital Oct. 6 on the new organ at Our Lady of Lourdes Church in Utica.

Dominic is an assistant organist at the Parish Community of St. Leo and St. Ann in Holland Patent, St. John the Baptist in Newport, and St. Joseph–St. Patrick in Utica.

His recital featured the Prelude and Fugue in D Major by Johann Sebastian Bach; the Chorale No. 3 in A Minor by Cesar Franck; Peace by Mons Leidvin Takle; the Finale from “Organ” Symphony No. 3 by Camille Saint-Saens (transcribed by Jonathan Scott); Carillon-Sortie by Henri Mulet; Concerto No. 3 in G Major by Padre Antonio Soler (arranged by E. Power Biggs); Hymn to Freedom (after Oscar Peterson) by Mons Leidvin Takle; and Fantasy and Fugue on the name B-A-C-H by Max Reger.

“As a colleague wrote following Dominic Fiacco’s recital on Sunday, ‘Dominic played as well as any major artist I have ever heard. … Unbelievable.’

“Indeed, as I stood beside this 14-year-old young man turning pages and pushing some pistons for the Reger BACH, I could only marvel at the virtuosity and musical depth of what I was hearing. That was the story of the entire program, and the multiple standing ovations he received — real ones, not the obligatory ones we witness as a matter of course — told the story again and again.

“And yet, Dominic remains humble and gracious — charming the audience with spoken program notes, greeting people with warmth and friendliness, and thanking those who helped make this recital possible.

“One more story: His opening piece was the Bach D major prelude and fugue, played with flair and breathtaking excitement that brought the first shouted bravos from the audience. After taking his bows and coming back to the bench, he looked up at me and said, ‘Was that OK?’”

The dedicatory recital program says that Dominic began studying music at the age of four. He has performed on organs including the Roosevelt-Schantz at the Cathedral of the Immaculate Conception in Syracuse, the Aeolian-Skinner at the Cathedral Church of St. John the Divine in Manhattan, the Frobenius at Saratoga Springs United Methodist Church, the M.P. Moeller at the West Point Cadet Chapel, and the Wanamaker Grand Court Organ at Macy’s Center City in Philadelphia.

Bradley Day, owner of Allen Organ Studios in Delmar, N.Y., installer of the Lourdes organ, wrote that the organ “represents state of the art 21st century organ building and technology.

“Allen has digitally sampled famous existing pipe organs from around the world and re-creates them with their exclusive patented technology. The organ has the equivalent of over 372 ranks of pipes or about 22,000 individual organ pipes, all digitally re-created by Allen engineers.

“Also, Allen’s all-new Genisys voices technology allows the organist to add two additional voices to each division for a list of over 250 organ and orchestral voices.