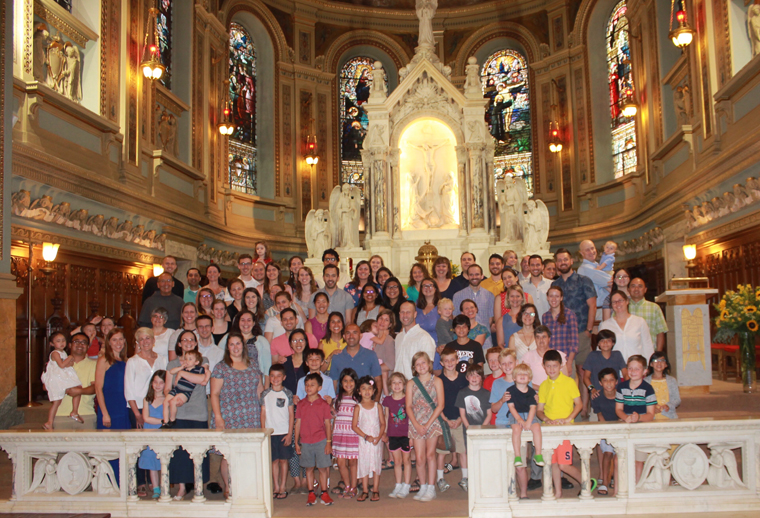 Young adults serve others and also develop their faith

They sound like secret agents: “FC 1, “FC 3.” This year’s class of prize recruits — more sacred than secret — gets the milestone marker “FC 20”: FrancisCorps Team No. 20.

FrancisCorps was founded on July 1, 1998, by Brother Jim Moore, OFM Conv., as an official ministry of the Conventual Franciscan Friars. FrancisCorps accepted its first young-adult volunteers on Aug. 14, 1999. For one year, they serve in roles such as mentors and counselors for people including refugees and those who are homeless. The volunteers live at a house in Syracuse and pray together every day.

The program’s inspiration is divine:

“God sends us who God sends us,” said Alexander “A.J.” LaPoint, the director. He once abandoned doctoral studies because God didn’t need another Ph.D.; God needed a bright volunteer to work at the Assumption Food Pantry and a medical clinic run by the Franciscan Sisters. And so LaPoint affixed FC 10 to his name instead of Ph.D., and now he ministers to the volunteers and helps them make the very most of the experience.

“In the spirit of Saints Francis and Clare of Assisi,” a volunteer’s workday is prime and even the off time is sublime: After eight hours of “imparting human dignity” on people, a volunteer heads to the FrancisCorps community’s bright yellow house to eat, to share the day’s “personal stories,” and to pray with the rest of the team. The yellow house has eight bedrooms and two bathrooms, and LaPoint is diligent about the upkeep.

Volunteers receive a stipend of $100 per month for personal needs, and the community itself has a budget for groceries. They receive transportation to and from work and health care if they need it. They live simply, LaPoint said, but the house has Wi-Fi and the young people can use their cell phones. They can take a weekend off to attend an important event back home.

LaPoint tells potential recruits: “You’ll get spiritual growth, you’ll get formation, you’ll get a knowledge of Franciscanism, you’ll get the opportunity to serve others, you’ll learn soft and hard skills that will help you in your career and in your life.”

Volunteers’ year of service includes weekly Mass at the Franciscan Church of the Assumption on Syracuse’s North Side, five retreats, and a pilgrimage to Assisi, Italy.

FrancisCorps, sponsored by the Order of Friars Minor Conventual of Our Lady of the Angels Province, “isn’t something you can sleepwalk through,” LaPoint said. “It’s hard work. People will ask: ‘What’s the hardest part of doing FrancisCorps?’”

‘The things I learned’

How does he answer?

“Community. The hardest part of being a FrancisCorps volunteer is not serving the poor, because you always get a visceral sense of I’m helping … the poor. It’s going home every day and really meaningfully engaging with the people that you live with and you care for, because you didn’t pick them, we picked them. God picked them; the Holy Spirit sent them.

“So when I lived in community with five other people, we got to know each other really, really well, and were really intentional with that; and the things I learned from that and the struggles we had as a community and the blessings we had have helped me in my personal relationships and the consideration and concern I show my spouse [Rebecca] and my child [Grace].

“It’s those kinds of interactions that have been really impactful, in addition to the amazing service that I was blessed to participate in.”

Volunteers tell stories of accompanying refugees who may have to visit the DMV several times to obtain the documentation they need to get a job; of holding the hand of a patient who died at Francis House; of partaking of a meal with a refugee family that invited them in. 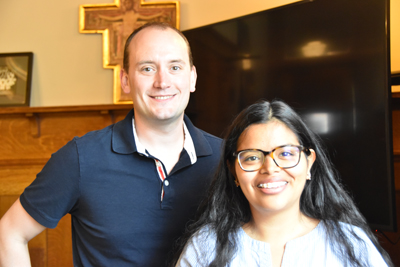 Alexander “A.J.” LaPoint, the director of FrancisCorps, says today’s young adults “have a spirit and a concern for service and helping others in a really meaningful way.” Johanna Cajina, FrancisCorps’ associate director, says young adults who volunteer for a year of service enjoy a “life-changing experience.” (Sun photo | Tom Maguire)

LaPoint grew up in Plattsburgh and did his undergraduate work at Siena College, where he first got to know Franciscans. A friend suggested he try a year of service while living in community. FrancisCorps fit because of the daily prayer, daily meals together, service, and retreats.

As an FC 10 volunteer, LaPoint had lent $5 to an Assumption Food Pantry volunteer named Larry, whom he had worked with. Larry moved to Florida and years later, LaPoint needed a ride from the airport in St. Petersburg. He called Larry: “He picks me up at the airport with the five dollars.”

“Personal stories,” LaPoint said. “And I’ll tell ya: Every single FrancisCorps volunteer has one.”

A story of transformation comes from FC 17 volunteer Johanna Cajina, who in August will begin her third year as FrancisCorps’ associate director. Last year she traveled to 38 colleges throughout the country seeking FC volunteers.

“To quote my parents,” she said, “when I came back from my year of service from Costa Rica, it was a 180 change for me. I was not the person who left [Silver Spring] Maryland and then went to Costa Rica. For them it was: This young woman who returned … had so much growth … spiritually, professionally, and personally.”

In Costa Rica, she worked with 30 girls ages four to 12. They stole her heart, she said, as she tutored them in English and computer classes.

FC 4 alumna Jennifer Coelho wrote in her reflection last year: “God has placed a spark in my heart for feeding the hungry. This spark billowed brightly during my year in Syracuse serving at the Assumption Food Pantry and Franciscan Northside Ministries.

“In the 15 years since that treasured time, I have worked at a food bank, served at a homeless shelter and food pantry, delivered homemade meals to the homebound, and made many casseroles, cupcakes, and sandwiches. …

“It is the FrancisCorps memories and relationships that remind me to seek, honor, and serve Christ in every person.”

She now lives in Haddonfield, N.J.  In an email, she wrote: “I piece together several volunteer roles. The pantry that I wrote about last year actually closed. I’ve been able to stay in touch and help with lunches at an AA/NA meeting house. In the fall I’m going back to school for pottery. Hoping to bring clay for people with different abilities as well as doing women’s retreats with clay in the future.”

Dr. Sean Gaw, DVM, was a member of FC 1. An Oneida resident, he is the associate veterinarian at New Hartford Animal Hospital. In a reflection for the FrancisCorps’ 2016 newsletter, he wrote:

“When I spent a year in FrancisCorps’ founding class, I had just graduated from architecture school. It took nearly a decade for the values of service to the poor and St. Francis’ special connection to animals to transform my life. …

“I always think of my FrancisCorps community as those who bring out the best in me, and who keep reminding me that God is smiling.”

Online through PayPal: Click the Donate button at franciscorps.org/donate/