The Diocese of Syracuse — Bishop Thomas Costello: Member since Feb. 23, 1929 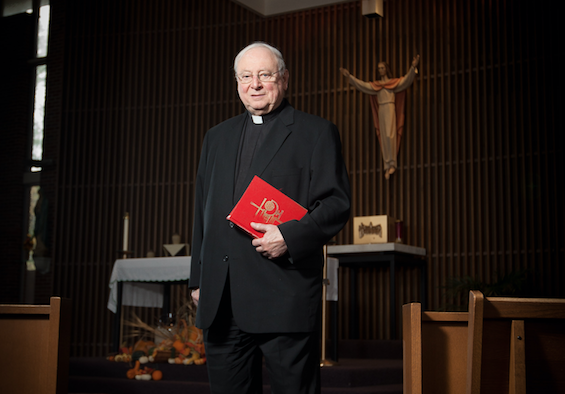 Auxiliary Bishop Thomas J. Costello is pictured at Our Lady of Lourdes Parish in Syracuse. The parish was his first assignment as a priest in 1954, and he served as the parish’s pastor from 1975 to 1978. (Sun photo | Chuck Wainwright)

Editor’s note: Catholic Sun editor Connie Berry interviewed Auxiliary Bishop Thomas J. Costello in 2011, in advance of the diocese’s celebration of its 125th anniversary. The interview took place at Our Lady of Lourdes Church in Syracuse, where Bishop Costello served his first assignment as a priest in 1954 and where he served as pastor from 1975 to 1978.

Q: What is your earliest memory of being a member of the church in Syracuse?

A: Probably third grade when I was enrolled at St. Mary’s School in Oswego. That was my first experience with Catholic school. I’m sure I had to learn the bishop’s name and that kind of stuff. That would have been 1937.

Q: We’re meeting at Our Lady of Lourdes Parish in the Valley neighborhood of Syracuse. What does this parish symbolize or mean to you?

A: This was my first assignment. I arrived the 25th of June 1954. Those first five years might well have been the best of my priesthood. I was with a wonderful pastor, Msgr. Martin Watley. I found here a welcoming people and I was full of the zeal of a newly-ordained. I left here in September 1959 to go back to school in Washington and remember distinctly driving out of the driveway with tears streaming down my face. It was a great first assignment and he was a magnificent model.

Q: How do you think the diocese has evolved during its history? Has it followed the pattern of the universal church?

A: We patterned the development of the church I think. We enjoyed the ups and suffered the downs the church in the U.S. has experienced. There was a change in the media even before the scandal. The church had been the good guy and then we were put on the defensive.

Q: Modern culture often depicts the Catholic Church as unchanging and stagnant. Do you agree with that sentiment?

A: I think we’ve changed a lot and we’re on the cusp of more change. The new missal will be a change. Hopefully we’re prepared for it. The body of bishops has certainly changed. Joe Champlin used to use this expression, “The diamond never changes but the setting does.”

Q: What do you consider the finest moment in the history of the diocese?

A: I only know 57 years of it. For me, Frank Harrison’s installation in February 1977. It was at the War Memorial. The Wall of Parish Banners — which we’re going to replicate at this anniversary — that was it. His motto was “Unity in Christ” and I never felt diocesan unity as well as I did that day. For me, Harrison’s tenure was the Camelot years.

Q: What do you consider the most challenging period in the history of the diocese?

A: The challenges have been running somewhat concurrently — the need to restructure parishes and the scandal of child abuse by priests presented the most challenging time. Those were and still are the most difficult days. I think the abuse question seriously challenged the credibility of the church. I think the parish reconfiguration struck people in a very significant area of their experience of church.

Q: How would you describe or define the Diocese of Syracuse to someone?

Q: You have worked within the U.S. Conference of Catholic Bishops. Do you have an idea of what the Syracuse Diocese is noted for in the overall larger picture of the U.S. Catholic Church?

A: Bishop Harrison was the chair of the Committee for Religious and I think he was recognized nationally as being a friend and advocate for men and women religious. I think the extraordinary effort the diocese made in reference to the retirement of religious exemplifies or demonstrates his commitment and our generosity. I think our diocese was recognized for that effort and it was Bishop Harrison that produced it.

Q: Who in your opinion were some of the best spiritual leaders in our diocese?

Q: Where do you think the U.S. Catholic Church is headed? What do you foresee as the future of the church in this country? In this diocese?

A: I think that the Holy Father has told us, he’s indicated, shared his conception that we are destined to be more of a remnant church. It’s clear that the traditional indicators of being a practicing Catholic are less obvious — Mass attendance, reception of the sacrament of reconciliation. I think we will have less influence than has been our history. I see that specifically in the public policy arena. Our voice is not as loud a voice, as convincing a voice, as it once was. I see our role as to be a “yeast” to society.

Catholic education within the diocese is tied into the future of the church. In 1964 we enrolled 43,000 students across our seven counties. Today’s Catholic student population is much diminished but I think it’s crucial that we maintain and offer to parents the option of a Catholic school education if that is what they wish for their children. I am particularly excited by the model being developed at Cathedral Academy at Pompei. They have students representing five continents and 15 languages enrolled there. The students represent refugees, immigrants, traditionally impoverished children and children who come from Eastern European families. This can be a model for urban education in the Catholic tradition — a model for others to emulate. The diversity of the students and their new instrumental and vocal music program they’re in the process of implementing is full of excitement and has implications for other areas of the curriculum.

Q: If you had one hope for the future of the church in Syracuse, what would it be?

A: That it would be a beacon to all people, showing them the love of Jesus Christ.