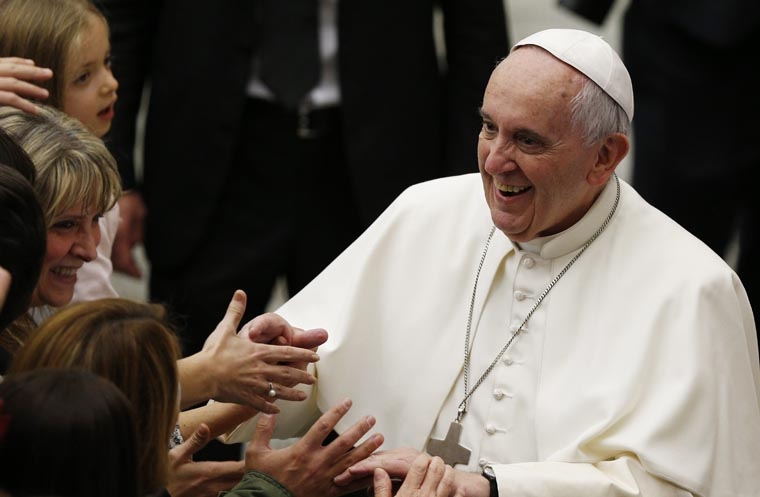 A dozen ways to live a better life this year

Looking for a wise source to offer tips on living a better life spiritually and physically in 2015? Look no

further than Pope Francis. Here are 12 of the popular pontiff’s views on how the faithful can make better choices that will lead to a more fulfilling Christian life.

Create a strong relationship with God
To achieve an intimate relationship with God, which according to the pope “is the backbone of everything we do and everything we are,” Pope Francis suggests spending time in prayer and reading the Word of God on a regular basis. “Christians who do not nourish themselves with prayer, the sacraments and the Word of God inevitably shrivel up and run dry,” the pope stated during a speech Dec. 22 to members of the Roman Curia.

Focus on the needs of others
At a special audience Dec. 22 for Vatican employees, the pope spoke to those gathered on the importance of “healing wounds” and fixing  “whatever defects still linger in one’s life and heart.” In an effort to do this, the pope requested followers to ask and offer forgiveness: “Let’s imagine how much our world would change if each one of us began right here and now and seriously took care of ourselves and generously took care of our relationship with God and our neighbor.”

Celebrate and notice the hard work and importance of others
During a Dec. 22 address for members of the Vatican’s central administrative team, the pope reminded the faithful that, “Those parts of the body that seem the weakest are the most important.”

Cherish family
“The family is a treasure, children are a treasure,” Pope Francis said to crowds gathered in St. Peter’s Square Dec. 22. The pontiff requested parents ask themselves, “Do I have time to play with my children or am I always busy and I have no time for them?” The pope believes that spending time with the family is “so wonderful. It is sowing the seeds of the future.”

Don’t use vulgarity and avoid envy and jealousy
The pope tells Christians to remove “offensive words, vulgarity and worldly decadence,” from daily life. “Jealousy and envy open the doors to everything that is bad.” The emotion of jealousy “is a strong poison” that divides communities and families like Cain against Abel,”  he said in a homily early last year.

Do your best
Workers should come to work and do their jobs “with enthusiasm, humility, competence and passion with a spirit that knows how to thank the Lord,” stated the pope during a discussion on Dec. 22 with members of the papal household.

Let it go
Holding on to anger, the pontiff believes, will just create “rancor that leads us to revenge.” Instead, during an early morning Mass last year, the pope requested Christians avoid  “envy, lust, hatred and negative feelings that devour our inner peace and turn us into people who are destroyed and who destroy.” That doesn’t mean there won’t be conflicts in life. “Sometimes the plates will fly,” the pope said, referring to arguments and disagreements. But “after the storm has passed,” the pope cautions the faithful to work things out with others or “over time the wall grows higher like weeds that choke off the grain,” noting “Even our heart can become like the Berlin Wall.”

Avoid gossip and using words to hurt others
Pope Francis is sympathetic when Christians who are hurt and in pain turn to hurtful words and expressions to defend themselves. “I understand these situations. But it ends up very badly. In the end we are all destroyed, right? And that is not needed,” counseled the pope at a meeting with members of the Roman Curia Dec. 22. Instead, the pope asks Christians to have “the wisdom to bite your tongue in time, to not say insulting things that then leave a bitter taste in your mouth.”

Don’t whine
Stop “complaining continuously, which leads us to desperation,” Pope Francis told visitors gathered in St. Peter’s Square Dec. 14. “There are people who do not know how to thank God; they always look for things to complain about. A Christian can’t live that way, always looking for something to complain about,” advised the pope.

Be humble
The pope stated during a papal audience that through humility “we find our strength, our treasure.”

Smile and be joyful
Don’t wear what the pope refers to as a “funeral face.” Instead, embrace joy. “The human heart desires joy,” the pope said to visitors in St. Peter’s Square Dec. 22. “We all want joy; every family, all peoples aspire to joy. But what kind of joy are Christians called to witness? It is that joy that comes from closeness to God and from his presence in our lives.”

Be at peace
“A Christian is one who has a heart full of peace because he or she knows how to find joy in the Lord even when going through difficult moments in life. Having faith does not mean not having difficulties, but having the strength to face them knowing that we are not alone,” stated Pope Francis during a speech to crowds gathered in St. Peter’s Square last month.