The retiree and the tabernacle: a writer’s tale 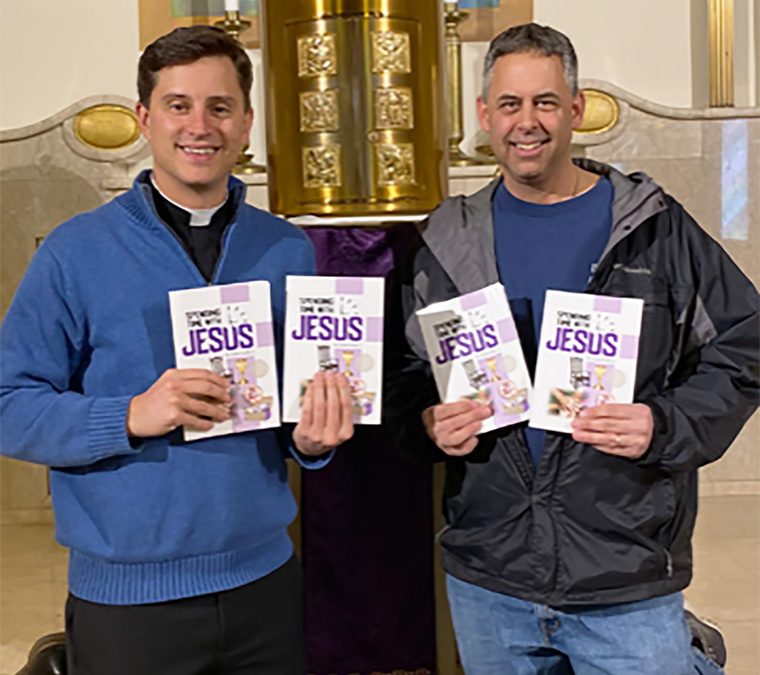 Our Lady of Hope parishioner pens book lauded by priests

But now they’re spiritual exercises, and they’re in his new book, Spending Time with Jesus. Examples: Figure out how and when and spend five minutes with Jesus today; tell Jesus everything even though he knows everything about you already; become aware of grace and ask for it, accept it, and use it as you receive it.

After he retired from Onondaga-Cortland-Madison BOCES in 2017, he said in a phone interview, “I started going to daily Mass, and I had this in my head that I had this book planned and I wanted to write.”

“I love that Chuck got started on his book right away when he retired,” Father Ballard wrote in an email. “He decided the time was too precious to waste. He would attend daily Mass (he still does!) and then would spend time in front of the Blessed Sacrament in order to let Jesus guide the book. We are very proud of him here at Our Lady of Hope!”

A quick and enlightening read

With help from an editor he found in Cortland, Scheftic self-published the 100-page book ($9.95) on Amazon — paperback and Kindle versions. “It only takes a few hours to read,” he said.

The reference list for the book covers two pages; sources quoted include the Bible, saints, priests, popes, martyrs, and the Catechism of the Catholic Church. As Scheftic says in his book: “Are you someone that learns best by reading, watching, or listening? … Educate yourself! Let your Catholic knowledge be increased!”

Scheftic, who has baseball and basketball coaching experience himself, even includes a lesson from his wife, Lorraine, “a great high school field hockey coach” who once pulled the masterstroke of moving her best offensive player to defense after gaining a slight lead in a game.

“Just as coaches … make changes to better their teams,” he writes, “you can make changes to reach a new level of spirituality. … Jesus does not want us to become stagnant and complacent. He wants us to flourish and grow.”

This short book also quotes the Catholic Sun’s October 2017 story “Our Lady of Lourdes jammed for final Mass”; Father Thomas P. Fitzpatrick tells the congregation: “YOU are the church, not this building, not ANY building. You are the church.”

In that homily, Father Fitzpatrick noted that the apostles, having witnessed the horror of the crucifixion, went out and preached the word. “That’s what you do,” Father Fitzpatrick said. “You still have work to do. Go out, and change people and lives.”

Another local priest who helped inspire Scheftic’s book is Father John D. Manno, presently the pastor of Holy Family Church in Fairmount and the former pastor of the former St. James Church, which is now Our Lady of Hope.

In the foreword of the book, Father Manno writes: “This book is a WITNESS to the realities of life — realities that so many go through. I strongly recommend this book to those who are searching for more in their faith journey. Spending Time with Jesus gives WITNESS to the joy that faith can bring to anyone’s life. Chuck reminds us so well that spending time with Jesus in this life leads to spending eternity with Jesus in heaven.”

Scheftic sums up the book on an early page: “The first seven chapters reflect on different ideas and ways I spend time with Jesus. The next two are about the nuts and bolts and beauty of Catholicism. The final four deal with ways we can put our faith into action. At the end … I have included some prayers that I find helpful. I have kept this book short and hopefully to the point, so no one has trouble finishing it. I hope this book will resonate with your heart and soul.”

Some points he makes in the book:

• “When faith is passed down from generation to generation, it can be pretty powerful.” His grandfather James F. Leary, who lived to age 93, “was the only person I’ve ever known who could split an apple with his bare hands.” But, he adds, “the greatest thing he shared with me was his faith. He was the holiest man I knew.”

• “The most important sentence in this book is to ‘start and begin to have a relationship with Jesus Christ.’ By receiving Communion, now you can touch him and now you have a physical relationship with him. Jesus is in you and you are in him.”

• “Drop to your knees and thank God for creating and making YOU! A newborn is a true miracle and a gift from God.

• “Thank God for all the blessings, gifts, talents, and mercy he has given you already.”

• “Figure out what things, problems, ailments make up your cross. Accept and embrace them. Praise and thank Jesus today, give it all to Jesus. He did it for you!”

He concludes the book with a “simple” but “very vivid” dream that he had. Over the phone, he described it:

Mother Teresa was at a podium; she was giving out an award to Pope St. John Paul II, and Scheftic was escorting the pope to the podium. “And then all of a sudden, Mother Teresa … mentioned how handsome he was, and I wrote how Pope John Paul II started to blush a little bit, and I could see that.

“But then she went on to talk about how great his heart was. And then as I was walking with John Paul II holding his hand, I was holding it interlocked like I would hold my wife’s hand.

“And I could feel a pulsating, and St. John Paul II said to me, ‘That’s Jesus’ presence, that’s his heartbeat.’ And I still have that feeling in my hand, I can feel it getting big and almost losing control of his hand. … It was awesome.”