Therapy, Retrouvaille and the sacraments offer hope to failing marriages 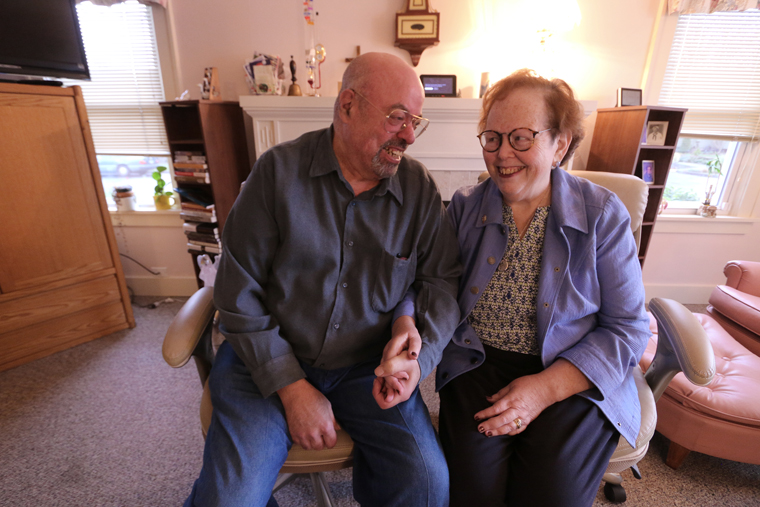 PORTLAND, Ore. (CNS) — The marriage appeared severed. It was a mess of miscommunication, heartbreak and a broken vow. They’d contacted divorce lawyers and he’d moved out. Her friends encouraged her to dump him.

“Our marriage was in a crisis that we couldn’t overcome ourselves,” said Carol McMenamin, 63.

Twenty years later, Carol and her husband sit side by side holding hands in their living room. Kevin McMenamin, 66, looks tenderly at Carol. She laughs and smiles.

The couple, members of All Saints Parish in Northeast Portland, will celebrate their 42nd wedding anniversary in April.

“I didn’t think it was possible,” said Kevin of avoiding divorce.

Figures vary, but the chance that a marriage in the United States will end in divorce is likely somewhere between 42 and 45 percent based on a 2017 assessment of research published in Psychology Today.

The divorce rate for American Catholic adults is an estimated 28 percent, according to the Center for Applied Research in the Apostolate at Georgetown University.

Yet couples who see divorce, separation or lifelong unhappiness as inevitable have found healing and renewed love is possible — with ample help.

Intensive therapy, the sacraments and a number of Catholic resources, notably a program called Retrouvaille, meaning “rediscovery” in French, have saved countless relationships.

“To have that partner in life back, to get that wonderful person I fell in love with back,” said Carol, “it’s a gift.”

Infidelity is one of the top reasons for divorce, but marriages falter for a range of reasons. Addiction — to pornography, substances, even work — a frenetic lifestyle, communication problems, overuse of isolating technologies, the stress of children and finances, and a distorted view of love all contribute to marital struggles, according to Jason Kidd, director of the Marriage and Family Life Office of the Archdiocese of Portland.

There is a pervasive misunderstanding of what love is, said Kidd, a married father of four. “A good marriage doesn’t just happen, it takes work. Authentic love is a choice, and it needs to be willing the good of the other.”

Pope Francis, in his 2016 apostolic exhortation “Amoris Laetitia” (“The Joy of Love”), says it’s harmful to seek a fairytale-like relationship. He tells couples not to “dream of an idyllic and perfect love needing no stimulus to grow.”

“A celestial notion of earthly love forgets that the best is yet to come, that fine wine matures with age,” he writes.

Polly Burton, clinical manager at Northwest Catholic Counseling Center in Portland, said nearly 70 percent of the marital conflict she sees stems from personality differences — introvert versus extrovert, a thinker and a feeler. Since these traits are unchangeable, “couples fight about the same things over and over” until they learn to speak each other’s language, she said.

The remaining marital issues Burton encounters surround past attachment issues or trauma. If an individual was in foster care or had a chaotic caregiver, for example, an intimate relationship can at times “trigger painful feelings,” she said.

Burton said it’s not always possible for couples to recover from extra-marital affairs, but it is possible. The pairs must rebuild trust, forgive and realize “how important the relationship is to both of them,” she told the Catholic Sentinel, Portland’s archdiocesan newspaper.

“If someone wants to witness miracles, they should come to Retrouvaille,” said Carol, who felt her marriage nearly crumble after Kevin had an affair.

During the Retrouvaille weekend, which Carol calls “an emergency room for marriages,” couples learn to re-establish communication and gain insights into themselves as individuals and as partners.

Kevin learned to put his feelings into words; Carol gained a deeper understanding of forgiveness and how to communicate better.

Retrouvaille is presented by three married couples and a priest. Follow-up presentations explore a number of topics, including forgiveness and trust, sexuality and intimacy.

Originating in Quebec, Retrouvaille (http://helpourmarriage.com) came to the United States in 1982 and has spread across the globe. It is open to married couples regardless of religious background. Some attendees have been married a half-century, others less than a year.

David and Robin Koch, current coordinators for Retrouvaille of Oregon, attended the weekend program several years ago after David asked for a divorce.

David, 46, agreed. “We began communicating in different ways than what I’d known before,” he said. “I felt I was heard and understood and I began to hear and understand Robin in a new way.” He learned how to be vulnerable, communicate on a feeling level and give his wife space to do the same.

Retrouvaille helped her understand there always are choices in a relationship. “You can choose to love your spouse even when they are unlovable, when they are not at their best,” she said.

Robin and David, who are Episcopalian, said the stories from the couples leading the weekend gave them hope that they, too, could find healing.

“When you hear stories of infidelity, alcohol and intense pain — and see these couples communicating and holding hands — it’s inspiring,” said Robin.

In addition to Retrouvaille, counseling is critical for those in crisis, said Kidd. Parishes and priests often have a database of local therapists, and he suggests couples start there.

Unhappy couples wait an average of six years before getting help, according to the Gottman Institute, which researches and supports healthy marriages.

Don’t wait that long, said Burton. “People think if they go they are somehow broken,” she said. “But therapy is a tool; you can pick it up when you need it and put it down when you don’t.”

Father Don Gutmann, pastor of St. Clare Parish in Southwest Portland, said therapy is essential and so are the sacraments.

The Eucharist is a paramount source of strength, as is attending Mass as a couple, he said.

The priest added that when a marriage is struggling, people are not as good at protecting themselves from sin. Couples readily exchange harsh words, and “bringing that into confession allows God’s healing grace to help them do better in the future,” he said.

“Even in a good marriage, most people have some kind of issue in their relationship,” acknowledges 76-year-old Jack Rich, a member of St. Mary Parish in Corvallis.

Along with his wife, Jo, Rich is a presenter at Worldwide Marriage Encounter (www.wwme.org), a Catholic-based program enhancing marriages through a weekend of presentations and sharing.

Weekend topics include effective listening, and presenters give concrete examples. “Good listening means you aren’t thinking of something else as someone is talking or thinking of a comeback,” said Rich.

To strengthen good relationships and avoid a potential future crisis, couples must make their relationship a priority, said Kidd. One modest way is to go on regular dates.

“It could be as simple as going to the library and then sharing an ice cream,” he said.

Burton advises couples to find activities both partners enjoy and that complement each personality.

By putting effort into your marriage, you are “making an investment in one of the most important relationships of your life,” said Robin. There are ways, she continued, you can not only preserve it but also “make it amazing.”