They are ‘Jesus on the sidewalk,’ and God does the talking 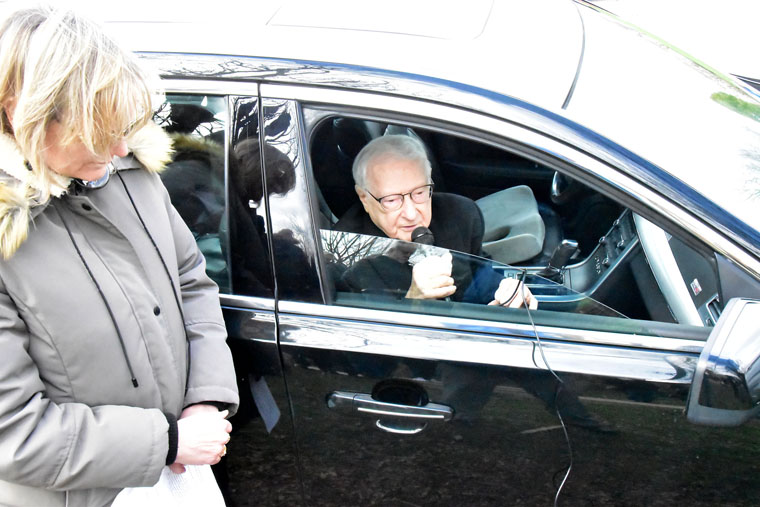 Where does a “firefly” get its spark? From the glowing passenger in the black car.

The 40 Days for Life Syracuse Campaign stationed its volunteers on the sidewalk outside Planned Parenthood from March 2 to April 10. On the concluding day, Palm Sunday, more than two dozen people gathered at the East Genesee Street site, where the microphone was passed to, in the words of one attendee, the “96 years young” man in the passenger seat of the car: Msgr. Eugene M. Yennock, a COVID-19 survivor. He said a prayer, gave a blessing and sang a song too.

Everybody lights up like a “firefly when he comes around because we all know how holy he is and what he brings—the blessing that he brings,” said Shannon Guy, co-coordinator of the Syracuse Campaign with Jeanie Owens.

“We have held over 85 prayer services on that sidewalk since we started 40 Days for Life, and Msgr. Yennock’s been to about 90 percent of them,” Guy said. “He comes out almost every single time unless he has a conflict. … He’s been our spiritual leader. He’s led us through this whole campaign, he’s taught us how to pray. …

“He can’t walk up and down the sidewalk like he used to and he can’t be out in the cold. But, yes, he’s come up a few times in the car since he’s had COVID, just to be there for the prayer service.”

The website 40daysforlife.com says, “40 Days for Life is an internationally coordinated 40-day campaign that aims to end abortion locally through prayer and fasting, community outreach and a peaceful all-day vigil in front of abortion businesses.”

2 Chronicles 7:14: “If then my people … humble themselves and pray, and seek my face and turn from their evil ways, I will hear them from heaven and pardon their sins and heal their land.”

The local prayer warriors actually pray outside Planned Parenthood year-round, not just during the international campaign.

“We had a very good campaign, it was our 27th campaign,” Guy said. “And we had a number of people involved in it from different churches, it was ecumenical of course. And certain churches would take a day and make sure that that day was covered. For example, Transfiguration was taking Tuesdays and had numerous people come out at different times to pray. …

“You really do notice that power of prayer on the sidewalk, because it does open a lot of doors and we were able to get a lot of resources and information into the hands of the families and women that needed it. We did have some women go over to New Hope [Family Services] for free sonograms and counseling.

“We also had a number of people notice that cars would pull up and then look at the prayer warriors on the sidewalk, and then … pull away.”

A lot of times, she added, people are looking for the “sign from God to not go through with this horrible event, and when they do see the people out there praying, they are pulling away and not showing up for their appointments. … We had people out in the freezing rain, we worked through a lot of snow, people came out whether it was very unpleasant conditions and they really sacrificed their time to be on the sidewalk and be Jesus on the sidewalk—the message of hope and the light to people that are in a very dark place in their lives. … We’ve been confided in by many women about their past abortions and been able to reach out to them and get them counseling and healing.”

A card that the prayer warriors give out lists agencies where pregnant women can get help. And for hope and healing after abortion, people can contact Project Rachel, 855-364-0076, or hopeandhealing@syrdio.org. For abortion-pill reversal: abortionpillreversal.com and the 24/7 Hotline, 877-558-0333.

The prayer warriors speak to women approaching Planned Parenthood and give them literature on how they can avert an abortion and get assistance for themselves and their unborn babies. “Sometimes you’ll get a 10-second opportunity,” Guy said.

On April 5, Guy was outside Planned Parenthood when a woman told her than on June 28, 2017, she had her baby aborted there. “And she told me she was still, still very, very distraught over it,” Guy said. “She had been through counseling at New Hope and she is working on her relationship with God.” The woman said she knew that God forgave her, Guy said, “but she still carried a heavy, heavy burden,” so Guy directed her to more services.

Then on April 7, Guy said, a man showed up in the rain and told of having a dream the night before “that told him to come out and talk to us. … He called us all kinds of names: clowns. He went on and on about the Republican Party.” The prayer warriors tried to tell him they are apolitical and are there to support women. “We really tried to overcome his misunderstandings about what we were doing on the sidewalk,” she said. “But he didn’t leave happy, so we prayed for him.”

As that was transpiring, said Michele Ryan, a year-round prayer warrior from Our Lady of Hope Church in Syracuse, another man pulled up. She said he put his window down and asked, “Is everything all right here? What can I do to help? Are you ladies OK? What’s goin’ on?’ And that was the end of that [other] man.”

Shortly after, though, Guy said, a woman pulled up and said her teenage daughter “was inside getting a pregnancy test. Yeah. So let’s pray. Let’s pray … for that young woman.”

“We’ve been here every week, rain or shine, and most of the time we’ve showed up, it stopped raining when we came, so God’s been blessing us here,” Gen said.

“We’ve actually seen some differences. I’ve had somebody walk up within 10 feet of me carrying this sign [that Ashley and she had made], and turn around and walk away—just as fast as they were walkin’ this way.”

Asked about the campaign, Ashley said: “I feel more confident to stand up for my views and also for the babies that don’t deserve to die. … I just want to stand up for life and help get people the chance to realize: You don’t have to do this. You can walk away and keep that baby alive. …

“When I first came here, believe me, I was nervous, I was hiding behind my mom. … And now I’m excited, I’m on fire, I love it. I just feel like I’m doing something good.”