They ‘didn’t need a parable,’ they had Father John 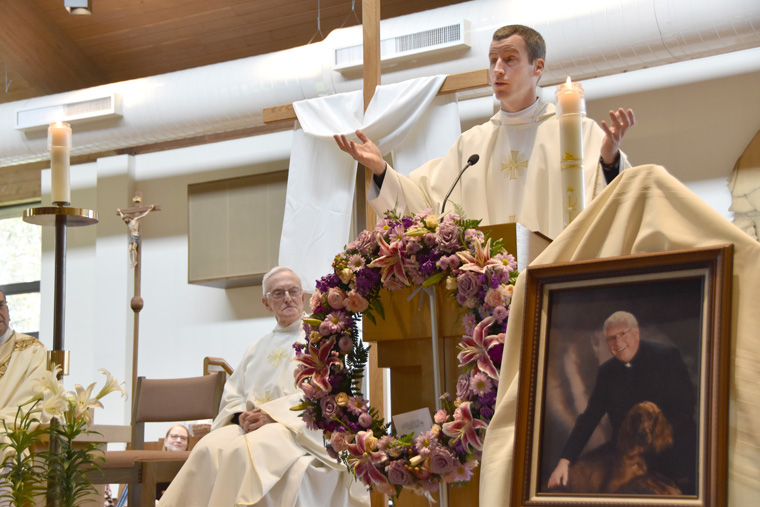 A most personable priest, Father Finnegan mourned in Baldwinsville 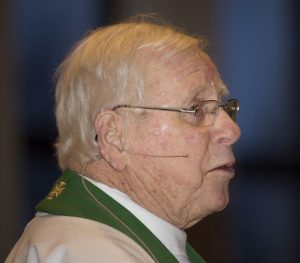 Father John S. Finnegan, who died April 30, “loved being in front of the congregation speaking,” said his nephew Patrick J. Finnegan. Father Finnegan served at various
churches in the diocese. Following his retirement in 2003, he was the administrator of St. Mary’s Church in Jamesville and St. Elizabeth Ann Seton in Baldwinsville, a position he held from 2005 to 2017. The late Maurice J. Finnegan Jr., who was Father Finnegan’s brother, was the architect for St. Elizabeth Ann Seton Church and many other diocesan buildings, including Bishop Grimes Junior/Senior High School. (Photo courtesy William Vasiloff)

His brother designed the church. He himself served it. May 4, the people filled it.

Father John S. Finnegan, founding pastor of St. Elizabeth Ann Seton Church in Baldwinsville, died April 30 at the age of 88. He had a small stroke last year, and then he came down with pneumonia several times. He donated his body to Upstate Medical Center.

He had his favorites — everybody. And he could “joke, joke, joke all the time,” even when it was almost the end time.

“That man became driven to make sure each one of you felt that you were his favorite, right?” said Father Joseph M. O’Connor, pastor of St. Elizabeth Ann Seton and homilist for the funeral Mass.

The church for the funeral had standing room only; cars outside had to park on the grass because the two lots were full. The musicians for the Mass numbered more than 30: the church’s own choir, plus several musicians from St. Joseph’s in Camillus.

“God knows the kindness that you extended to him,” Father O’Connor told the huge congregation. And people at the church noted Father O’Connor’s many kindnesses toward Father Finnegan in his final months.

Bishop Robert J. Cunningham, the main celebrant, had visited Father Finnegan the day before he died. “He called me by name, talked to me,” the bishop said. He added, “There’s no doubt how much he loved this parish and how much this parish loved him.”

Father Finnegan’s nephew Patrick J. Finnegan said his uncle “was my third parent because I spent a LOT of time with my uncle.”

Patrick said he had FaceTimed with his Uncle John the day before he died:

“‘You better shave that horrid beard off before you come here for my funeral.’ And we just all roared.”

Even in sickness as he grew weaker, Father Finnegan was deeply concerned about St. Elizabeth Ann Seton Parish. Father O’Connor recalled: “He would say when I went to visit: ‘What good am I to the parish? How am I being a priest?’”

While Father Finnegan may have said he was upset that he could not do more to help the parish in his last months, Father O’Connor said, “Father John, you did just what you were supposed to do. You showed how to finish the race.”

Mindful of how Father Finnegan spoke to all those Irish setters that he owned, Father O’Connor added: “And I trust that Father John was welcomed by God the Father at the Gates with words of welcome: You were a good, good boy; come in and take your rest.”

Father Finnegan was ordained to the priesthood on Feb. 2, 1956. Despite his illness, he was able to visit the parish on Christmas Eve 2018, and again on Feb. 2 of this year, when he celebrated his 63rd jubilee.

“Can we give glory to that?” Father O’Connor asked the congregation, which responded with applause.

Father Finnegan also served in parishes in North Syracuse, Syracuse, Utica, Camillus, and Jamesville. Following his retirement in 2003, he was administrator of St. Mary’s in Jamesville and St. Elizabeth Ann Seton, a position he held from 2005 to 2017. With him always were his Irish setters, and many of them were retired show dogs.

Father O’Connor told the congregation that Father Finnegan provided the parish with “a good image of God. … It wouldn’t take long to come up with a story where he did that for you.”

“I’ve never seen a priest smile all the time he was saying Mass,” said one of the founding parishioners of St. Elizabeth Ann Seton, Dr. Tom Wolff.

He added: “This was truly his family, and he loved his parishioners. … I think you could talk to anybody here, and everybody would feel that he was personal to them as an individual; he was able to do that.”

“He never said a bad word about anybody,” said another of the founding parishioners, Dee Carney. “He was always laughing and smiling and just the happiest man I’ve ever met.”

“He was everybody’s Uncle John,” said his nephew Patrick, who left Syracuse 30 years ago and now lives near a mountaintop in Asheville, N.C. He is the manager of pharmacy support services for Change Healthcare in Asheville.

Patrick’s late father, Maurice James Finnegan Jr., was the architect for St. Elizabeth Ann Seton Church. “I love the way that the Mass was set up to flow in this space,” Patrick said.

He also like the church’s “more contemporary,” “very Vatican II” architecture: beams; the openness of the worship area; the gathering area; the “cross-functional space”; and the “small chapel for the morning weekday Masses right out there as well, which is not overly prominent as you come in.” The church even has a spacious gym. 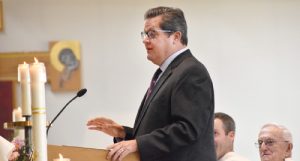 Patrick J. Finnegan, nephew of the late Father John S. Finnegan, says of his uncle: “He led us by example, with how he treated others.” (Sun photo | Tom Maguire)

Patrick figures it’s this way in heaven now, between his father the architect and his uncle the priest: “Well, my uncle’s doing all the talking, ’cause my uncle’s definitely the alpha; my dad was more introverted and a genius that’s quiet and reserved; and they’re so opposite it’s funny.”

“I think what I would miss most about him probably at this point is my Sunday afternoon phone call,” Patrick said of his Uncle John. “He called every Sunday so faithfully, all the way back to when you had to pay like 10 bucks a minute.”

“I tried to tell him so many times over my life about how much he meant to me,” Patrick said, “to my brother, to my sister, to our whole family. … And he seemed to shun that a little; he didn’t want me to talk that way; I think that’s partly a Finnegan thing.”

One “Finnegan thing” for Patrick was spending time with the family on Skaneateles Lake, where his grandparents and Father Finnegan had a place.

“Started on the west side first,” Patrick recalled, “and then we went over to the east side and we had a few places on the east side over the years.

“We went every Sunday all year for Sunday dinner; we all gathered out there as a family, the whole family.”

Uncle John would pick Patrick up in the car. “I was scared to death of those drives sometimes,” he said, “because of quizzes I would get.  Nary a four-year-old can speak Latin as well as he was hoping I could. … Just an example-providing and lesson-teaching guy. Literally, I don’t think I ever heard him raise his voice. …

“And we would always be talkin’. I mean, I was a young kid, so he was wanting to know what I’m learning about and all, and teaching me things. … It was truly like being at school in many ways, and I’m so glad that he did all that because it was helpful for me.”

He added: “My faith is something else that my uncle taught me, and that I have valued my entire life and will continue forever.”

When Patrick visited his Uncle John in November, he immediately knew something was very wrong: Father Finnegan was unable to get up out of his chair. Patrick had to carry him down the stairs so they could go to McDonald’s for a chicken sandwich, but that was just the prelude: They were going to the hospital.

“‘We’re not,’” Father Finnegan said, but that’s where they went.

“That was the start of five long months,” Patrick said, “and we both talked a lot about his struggles, and you know he was an incredibly proud guy, someone that taught me a lot about pride in yourself and appreciation.”

Patrick told the congregation that Father Finnegan was happy and fulfilled, and he thanked the people for everything.

Asked what his uncle, who could be impish with the jokes, would have thought about the huge gathering at his funeral, Patrick said:

“Well, this is a PRETTY good crowd.”