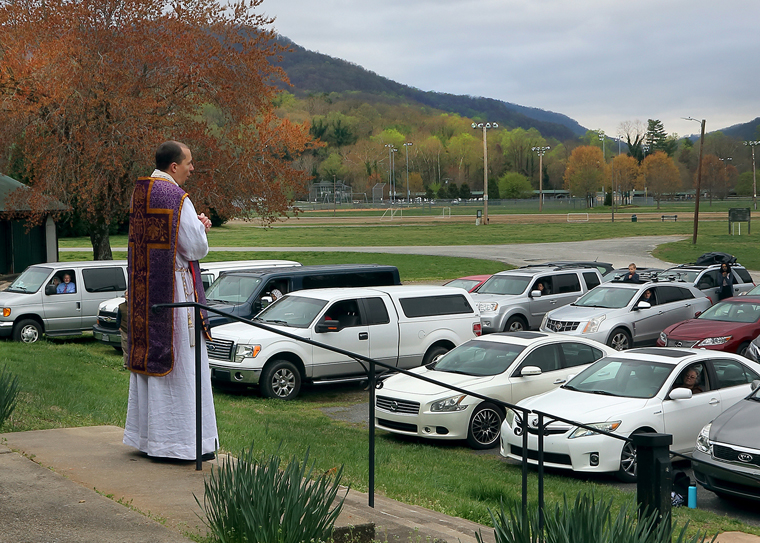 CHARLOTTE, N.C. (CNS) — It was supposed to be Laetare Sunday — a day of joy in the midst of Lent. But that joy took on a different meaning March 22, as Catholics across western North Carolina lived through their second Sunday without Masses.

The COVID-19 coronavirus pandemic has shut down nearly all public Masses since March 14, as people maintain a safe physical distance from each other to avoid spreading the novel virus.

As a replacement, Diocese of Charlotte pastors rushed to the web and to social media to livestream liturgies from inside empty churches to their parishioners sheltering at home. A few experimented March 22 with drive-through Masses, offering holy Communion to people in their cars.

Many of the pastors acknowledged the discomfort they felt at offering Mass to an empty church while their people remained at a distance, either at home or outside in their cars.

But many of them also connected the day’s Gospel reading of the blind man being cured by Jesus as an apt metaphor for the times in which everyone finds themselves.

At St. Patrick Cathedral in Charlotte, Father Christopher Roux offered Mass through Facebook, joking that it was a penance for his parishioners to have to watch him recorded on video.

Don’t give in to the fears and uncertainties of this world, he said, because the joy of the Resurrection cannot be obscured by any darkness.

“I encourage you during this time to, yes, embrace the reality of what we have to face, but do so in hope, rejoice in hope that Christ has overcome all of this. Do not allow the world to dictate your approach to the current time. Instead, allow the world to see in us the hope we have in Christ, the hope we have in the one who overcame sin and death.”

At Sacred Heart Church in Salisbury, Father John Eckert aired his Sunday Mass on Vimeo, likening the darkness of Lent to the current darkness of the pandemic.

“Whether or not we have (the virus), it has already changed all of our lives,” Father Eckert said.

But, he said, this time offers us a spiritual opportunity if we take it.

Besides praying for all those infected by the illness and the health care workers who are caring for them, he said, “One of my biggest requests of Our Lord during this time is that we are all made to see better.”

The temporary inability to receive holy Communion at Mass also presents an opportunity to look at Mass in a new way, Father Christopher Bond told parishioners at St. Margaret of Scotland Church in Maggie Valley.

“Don’t just fall like all the other dominos — the cause and effect of which you can do nothing about,” he said. “Fall into His mercy! Fall into the lap of divine grace! Maybe, fall into an astonishingly different approach to (and appreciation for) the mysteries of our faith,” he continued, now that it is not a matter of “not having to go” to Mass, but “not having the opportunity” to go to Mass.

“I sincerely hope the next time you have the opportunity to receive the Blessed Sacrament — which I hope is very soon — that all of you have a renewed love for the Eucharist!”

“It may or may not have been the very hand of God which put a deadly virus in the body of ‘patient zero’ and allowed it to spread,” he continued. “But the hand of God can touch and affect anything in this world as long as we let it. It can touch and transform you! Just ask the man blind from birth!”

St. Ann Church in Charlotte, St. Aloysius Church in Hickory and St. Joseph Church in Kannapolis experimented with “drive-up” holy Communion at Mass, via car lines in their parking lots.

The clergy offered corresponding videos of their Masses on Facebook or YouTube, so that the faithful could watch simultaneously from inside their cars.

At St. John the Baptist Church in Tryon, Father Jason Christian took the liturgy outside to Harmon Field. Parishioners watched from their parked cars in the grass field as he offered Mass for his people on the steps of the community center.

All of these efforts garnered lots of “thank yous” and enthusiastic cheers from people on Facebook.

“This is AWESOME!! Great work!!” wrote Matt Bazluki on the cathedral’s Facebook page.

Pastors also continued to arrange special set-ups for eucharistic adoration, placing the Blessed Sacrament in their parish office window for people to at least adore Jesus even if they couldn’t partake of him at Mass.

At St. Gabriel Church in Charlotte, Father Richard Sutter took the Blessed Sacrament out into his church parking lot for a second time in less than a week, blessing everyone who had gathered in their cars and along the sidewalk.

St. Patrick Cathedral held a Forty Hours Devotion, with no more than four people inside the church at a time, from Friday night to Sunday morning. At the conclusion, Father Roux led a eucharistic procession around the church grounds, with the faithful walking at least 6 feet apart from one another.