Nurse prayed before every shift — and the results amazed her

The “intermediary” never clocks out. 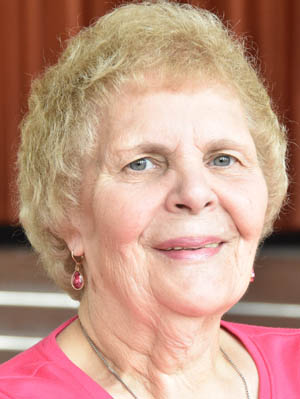 Elaine Lostumbo says, “Nursing isn’t a job. It’s a privilege, it’s a responsibility.” She adds: “I think of nurses as being close to the sick; and being the imitation of Christ for them.” (Sun photo | Tom Maguire)

“You have an intermediary there with you who is with you at all times,” she said, “and that is the Lord Jesus.” At the start of every day she said the “Prayer of a Young Nurse,” “Prayer for a Nurse,” and “A Nurse’s Consecration to Mary.”

Once an emaciated elderly man was “actively dying,” and the curtain was closed around his hospital bed as Lostumbo dutifully punched out from her shift. She went right back into that forlorn enclosure where the man lay and held his hand.

“I always felt like nobody should die alone,” she said.

She remembers: “His eyes were glued to my eyes, there was no blinking, it was eye to eye.” His breathing was getting less and less, and his heart was racing. “And while I had my stethoscope on this man’s chest, and him looking me directly in the eyes, his heart stopped. I will never forget that experience — he died with his eyes open looking at me and his heart stopped.

“Just a very powerful experience that, I dare say, not many people have had in nursing.”

What was going through his mind?

“I don’t know. I have no idea. I have no idea. I hope that he realized he was not alone. I had spoken to him about the Lord. … They say that the hearing is the last sense. And I had said to him that your time won’t be longer, that you will go home to the Lord. And shortly after that, … I left and went out and said that Mr. So and So has just passed away. That’s when I wrote the poem on that.”

After 53 years, Lostumbo retired from a pay job, at Christian Health Services of Syracuse, in January 2017 due to physical difficulties. Now she volunteers for the Central New York Regional Medical Reserve Corps. A member of St. Matthew Church in East Syracuse, she gravitates to the diocesan White Mass held for medical workers (9:45 a.m. Oct. 21 at the Cathedral of the Immaculate Conception in Syracuse); she considers it “a time of gathering and sharing all the aspects of nursing, especially the spiritual aspects. It is a time of great grace and strength to continue giving utmost care to others. … Spirituality has always been a part of my nursing career. From the time I was a student, it was always a part of my career.”

Lostumbo attended the former St. John the Baptist Academy in Syracuse from kindergarten through her senior year. She then discerned with the Sisters of St. Joseph of Carondelet for two years and decided it wasn’t for her. She came back home. Her mom was the first LPN that St. Joseph’s Hospital ever had in the days of waiver allowing two physicians to sign for the nursing license.

“She used to take me to the hospital with her,” Lostumbo said. “I’d go and meet the patients and particularly she took care of a lot of nuns up there, and I just kind of loved the atmosphere. … So that was my second choice [for a vocation and career].” 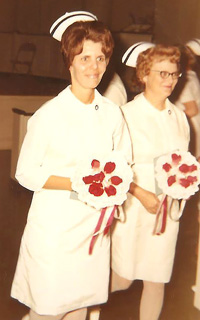 Elaine Lostumbo is shown at her nursing graduation in June 1970 at Onondaga Community College. “The important thing is to pray for our patients,” she says, “whether we’re at Holy Mass or whether we’re home. … Pray for people because there’s great power in prayer.” (Photo courtesy Elaine Lostumbo)

When she attended the Central Tech adult LPN nursing school, she took her student clinical at St. Joseph’s Hospital.

“When the priest came through the halls to distribute Holy Communion in 1963,” she said, “he was immediately preceded by a nurse ringing a small bell. If you were in the hallway, you had to get down on your knees immediately, and wait until he came out of the room he was in and passed you; then you got up and continued your work.”

Also, she said, when the attending doctor came into the nurses’ station, the nurse had to stand and give up her seat. “Oh yeah, I know a lot of the old customs,” Lostumbo said.

She was an LPN for four years and then earned her RN through Onondaga Community College. Also, she was in the diocese’s first class of Formation for Ministry and she took an extended unit of clinical pastoral education.

Her beloved “Prayer of a Young Nurse” condones laughing but not giddiness. In a photograph from 1973 at Upstate Medical Center, she is smiling next to a “surgeon” holding an engraved scalpel — actor Alan Alda, from the television series M*A*S*H, is looking down at a “patient,” a member of the media. “He’s a very pleasant, personable person,” she said of Alda. “And we actually had a lot of fun for that photo.”

Lostumbo also designed pins for nurses that include a “V” for the Fifth Commandment. She has one left. It is not her only cherished possession.

She recalls caring for a terminally ill lady who had only distant relatives, and none of them came to see her. The patient said she didn’t know if she should bother seeing a priest. “And I said, ‘Well, Mary, I do know.’ I said, ‘I think it would be a great grace for you, I would think it would be to your advantage to do this.

A priest met with the patient for about 20 minutes. “Father comes out, he looks at me and he says, ‘She’s all set. … She did confession, Communion, anointing,’ and he said, ‘She’s ready.’ The next day I had off. The following day I went to work to find out that she had died.” 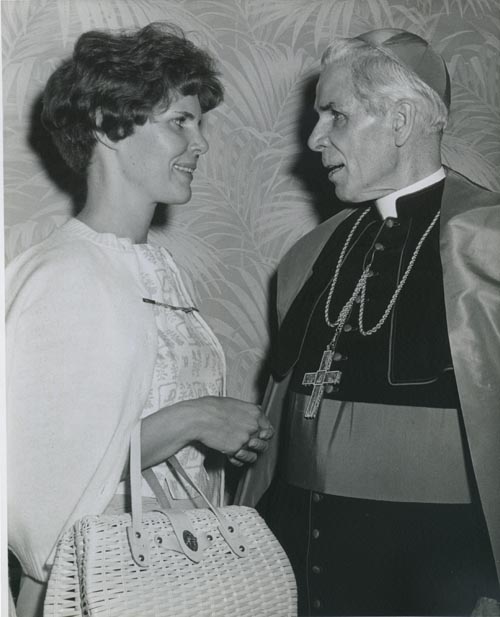 Nurse Elaine Lostumbo met Archbishop Fulton J. Sheen, who has been deemed Venerable, a major step toward canonization, in 1966 in Syracuse. The archbishop said he wished he had something to give her. He walked over to his jacket and from a pocket he removed multicolored mission rosary beads. He told the nurse to keep them. She had them for years and last year gave them to her neighbor Father Ken Kirkman. Photo courtesy Elaine Lostumbo

RESCUE OF THE ROSARY

The deceased patient’s relatives showed up and said they were only looking for insurance policies or a will. They left with some things in a bag. The next day, sitting in a trash receptacle by the elevator was the white rosary that had always been in the woman’s hands.

“I reached in there, and I didn’t care if anybody saw me,” Lostumbo recalled.

“My sons know the story of those,” she said, “and those will be in my hands when I die.”

She added: “I hope that my successors — nurses, doctors, medical people — will continue to carry on where I left off and listen to the promptings of the Holy Spirit and don’t be afraid to ask people where they stand and how things are, because you will see little miracles before your own eyes.”

Her ears were also sharp. As a young nurse working in a hospital, Lostumbo was tired and hungry one day as she raced to the cafeteria. She heard somebody crying in a phone booth. When the crying girl, 15 or 16 and suffering from a chronic illness, got off the phone, she told the nurse she was pregnant and her mother and her grandmother were pushing her to have an abortion that she did not want to have.

Lostumbo told her: “Honey, you need to just say NO and refuse it.” The nurse counseled the girl for the next few days and kept her in prayer.

Five or six years later, Lostumbo was working in an emergency room when a patient came in with a wiry, active little boy hanging onto her. The patient gave the nurse a big hug and confirmed that yes, that was the baby.

‘THE POWER AND THE MIRACLE’

“She said she doesn’t know what she would do without him, because of her being almost totally blind. He would take her by the hand, he would be protective, make sure she didn’t bump into walls or anything like that; and this was the end result and I just can’t even tell you what that meant to me.

“And actually, it wasn’t me, it was the Holy Spirit working through me. … That’s the power and the miracle of prayer.”

About 10 years after that reunion, Lostumbo saw that mom’s obituary in the newspaper. “I often think about this boy,” she said, “and I wonder where he is and what he’s doing. But it’s just a small example of how when we address the smallest things, it can end up being to save a life but in a different way.”

Lostumbo witnessed a tiny miracle under “very primitive” conditions while serving for a short time with Catholic World Mission in the mountains of Guatemala. With no medications during the delivery, a mother gave birth to a baby that was then wrapped in a sheet and placed in a cardboard box. A simple gooseneck lamp was placed over the baby for heat.

As she was leaving to return to America, the nurse got this comment from the high school girl who had served as her translator: “When I finish school, I want to go to nursing school. I want to be a nurse just like you.”

Lostumbo doesn’t know how the girl fared, but she summed up the Guatemala experience characteristically: “I just loved every minute of it.”

There were moments of awe as well. One day a hospital chaplain told her: “‘You want to see something amazing?’” A woman had had a spontaneous miscarriage. “And he showed me … the actual embryo that was probably six weeks, maybe a little less than that; that you could put on a dime, and you could actually see the digits for the hands and feet and little lines for ribs and a little teeny tiny projection of a head. …

“You couldn’t help but think: This is … the beginning of human life. … And it’s just amazing, God’s creation.”

She was an elegant maiden with soft, flowing chestnut hair hidden under a stark white cap, as she silently stirred down the corridor.

She loved life and lived it to its fullest, yet one muses why she chose such an arduous profession.

Her warm, gentle hands extend to clutch the cold, shriveled hands of a languishing sufferer.

Their eyes meet in silence; nothing is audible, yet much is said. Pain racks his entire body as she gently cools his fevered brow.

She knows that where there is life, there is hope, and hers is the sacred responsibility to encourage that hope.

Without a moment’s notice, breath ceases, eyes no longer see; nothing is said, nothing is heard.

The Divine Physician beckons the soul to come forth into Eternity. His handmaiden softly chants: “So be it.”

She moves on with selfless love, in silence and awe, to the next of her brethren. Her happiness lies in serving Him.