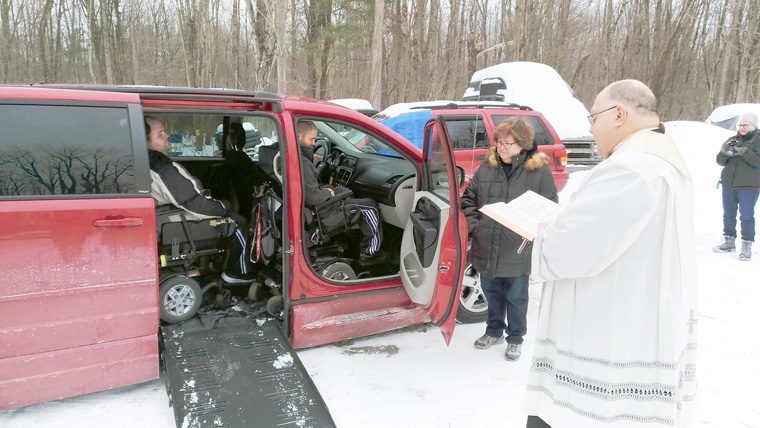 Father Joseph Scardella presides at the blessing of the van owned by Candie Goodno and her sons Billy, left, and Tim on Feb. 2 in Granby. “I think everybody could see the need” for the van, says Teresa Nipper, secretary for St. Stephen’s in Phoenix. (Photo courtesy Kelly LeVea) 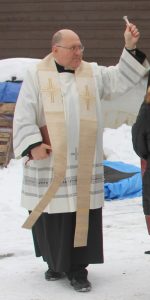 Father Joseph Scardella notes that when the Catholic community comes together to help those in need, “there is such power.” It’s about 300 horsepower, in the case of a suddenly highway-ready family in Granby.

A fundraising campaign that was promoted in the Sun in late December yielded approximately $20,000 to buy a specially equipped van for two men with muscular dystrophy and their mom. They had gone without a van since November 2017 when their old one rusted out.

Now, Candie Goodno can drive Billy, 34, and Tim, 33, to St. Stephen’s Church in Phoenix, doctor appointments, and get-togethers with their friends: “all the things we haven’t been able to do,” Candie said. This summer they will go to a drive-in. “Billy hasn’t been able to do that in over 10 years,” she said.

Candie thanks all those who donated talent, time, or money, regardless of the amount. They are “always there riding with us because they’re all a part of it,” she said. Donations came from as far away as Florida. Many came from the Utica area; locales included Baldwinsville, Binghamton, Endicott, Fayetteville, Fulton, Liverpool, Maine (N.Y.), New Hartford, Oswego, Oxford, Syracuse, and Williamstown.

“I am just so happy for the Goodnos,” Father Scardella, pastor of St. Stephen’s, said in an email. “This was truly a special Christmas miracle. Both St. Stephen’s and Holy Trinity [in Fulton, where he is also the pastor] parishioners and, from what I hear, people from throughout our diocese made this miracle happen.”

St. Stephen’s choir member Jody Frawley said there were probably close to 200 people who contributed. They included a letter writer who donated in memory of her own family member who had died. One entire family sent $1,500.

Frawley said: “I do believe in the goodness of people. … I always have.” 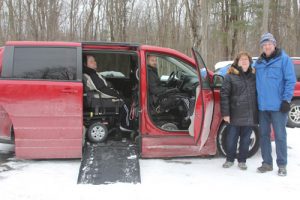 Pictured with, from left, Billy, Tim, and Candie Goodno is fellow St. Stephen’s parishioner A.C. Bowman, who made the van purchase happen through his job as a salesman for Billy Whittaker CARS and TRUX in Central Square. “It’s got every little extra on it that you can have,” Bowman says of the van. (Photo courtesy Kelly LeVea)

Added Toni Orlando, music director at St. Stephen’s, in an email: “This campaign to help the Goodnos, spearheaded by the Music Ministry at St. Stephen’s, is a perfect example of the countless ways that our musical family and parishioners care for each other and go out of their way to help others within our parish and in the community at large.”

“Our miracle happened,” said Candie, who went through the Rite of Christian Initiation of Adults program at St. Stephen’s and later joined the RCIA team. She said it is “so overwhelming that I don’t know how to express my gratitude. … I can’t believe it really happened. I thought we’d get enough for a down payment; I never thought we’d get enough to buy it outright but we did. You kind of have to see the Holy Spirit in that, you have to see God working.”

She quoted her son Billy: “‘I don’t know what I could say other than thank you.’”

The Goodnos, who live between Baldwinsville to the south and Fulton to the north, had relied on transportation help from Oswego County Opportunities, but it’s so sweet now to head down their rural 400-plus-foot driveway and out to dazzling opportunities like movies in the 2013 Dodge Grand Caravan SXT. “Fire engine red,” said a key benefactor, car-dealership salesman A.C. Bowman. “It’s as red as you can be, red like a tomato.” Red is Billy’s favorite color.

Tim, a former altar server, was diagnosed with MD when he was five months old; Billy, 15 months. They go to a specialist every year and they also undergo therapy. Their condition is eventually fatal, Candie has said.

Billy can only move his wrists to operate his wheelchair; he gets out of bed with help from two people and a Hoyer lift. Tim worked for eight years repairing and selling watches at a kiosk at Great Northern Mall. Candie walked him in and out of the mall in case he fell. He called in once when his grandmother died and once when he was in the hospital getting stitches because he had fallen and split his chin open.

The boys’ father and Candie’s husband, Bill, who was a huge help to them, died last October. Now Candie takes care of her sons all the time. She doesn’t get much sleep but said, “I’m sleeping better with the van in the driveway,” because now the boys are no longer trapped if something happens. In lake-effect-snow country, Candie shovels up to three or four times a day because she cannot let more than three inches accumulate on the van’s exit route.

“Even a car guy would say this was a real steal,” said Bowman, who works for Billy Whittaker CARS and TRUX of Central Square. A member of St. Stephen’s choir, Bowman also co-leads a parish youth group called Team Awesomeness with Ron Barnes. Bowman is recovering from his second brain-cancer surgery. “Amazing love that came out of our church for me,” he said.

Bowman in turn showed his love for the Goodnos by having his dealership look for an “upfitted van,” and he said they came up with “a heck of a good deal.” If Candie had paid $30,000 for the same van, she still would have gotten a good deal, Bowman said. He added: “It was intended for her.”

He didn’t even take a commission, and he made sure that a Syracuse “upfit company” went over the van and made sure the power lift works every single time, instead of its previous tendency of nine times out of 10.

The shiny Grand Caravan, which originated in Florida and had a second owner before Whittaker acquired it, has about 32,000 miles on it, undercoating, a remote start, push-button back and side doors, and storage in the third row. “I kind of kid about God showing off” a little bit, Bowman said.

Choir member Frawley said that as of last week, the Goodnos’ benefactors had raised $23,485, with more envelopes to be opened. The fundraising will continue.

“They still have plenty of other needs,” Frawley said, and it would be nice for the Goodnos to have money in the bank for insurance and future repairs on the van, which Candie said requires about $40 to fill up with gas. The van’s equipment will constrain gas mileage; adding the brothers and their wheelchairs into the vehicle totals about 1,500 pounds.

Fundraisers spoke at St. Stephen’s and Holy Trinity twice during the campaign, and Frawley thinks some church bulletins picked up the message too. An online page raised $6,935; the rest came from individual checks or cash (see box for how to help). “We had a lot of prayers being sent up,” she said.

“The whole parish is just very excited to be able to help somebody out,” said Teresa Nipper, St. Stephen’s secretary, who added that youth groups joined the effort.

Candie shared some of the notes she received from donors she doesn’t even know:

• “God bless all the Goodnos and all who are helping them.”

• “I was touched by the article in the Catholic Sun & want to make a donation toward Candie’s van (or if by a miracle she already has enough $ for van — for whatever else she needs).”

• “May God richly bless you and your sons Billy and Tim for your loving sacrifice. Be assured of my prayers.”

• “I don’t have any money to donate in December but I wish to donate after I get my Social Security check in January. I wish it could be more but right now I can’t send anymore. If you should meet your goal before you receive this, please give it to the family for gas or anywhere else they can use it.”

• “God bless your family. I hope this helps you and I pray you get what you need to make your lives a little easier.”

• “Read the story about you and your devotion to your two wonderful boys — God bless you all — hope your Christmas miracle arrives! My husband & I are blessed [with a large family]. … We wanted to share our gratitude to God.”

• “After I read the story in the Catholic Sun about Mrs. Goodno, and her two boys, I wanted to help, also. She and her boys are remarkable people with a very heartwarming story to tell. I hope they are blessed in abundance.”

• “We all need something to keep us going. Please accept the enclosed check toward your van funding. … Best wishes for a most productive new year.”

To people who say the world is falling apart and people don’t care about other people, Candie said this: “Send them my way, I’ve got proof otherwise.”

The proof was sitting right next to her one day as she shoveled around the van. She was talking to it. “I think it’s sitting there smiling at me,” she said.

She is waiting for the boys to name it: