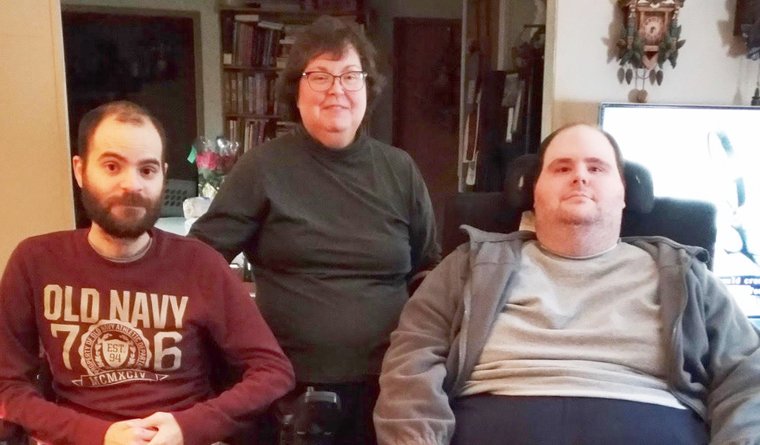 A new van would boost two brothers living with MD

The project goes beyond the merely ambitious. “We’re hoping for a Christmas miracle,” said Jody Frawley of St. Stephen Church in Phoenix.

Choir member Frawley and other church members have started a gofundme.com page to raise $75,000 to buy a new wheelchair-accessible van for three of their own. “We’re hoping to get it as far and wide as possible,” Frawley said of the campaign.

Longtime parishioner Candie Goodno’s two sons, Billy, 34, and Tim, 33, have muscular dystrophy and use wheelchairs. The brothers have been housebound because their vehicle rotted out. The only transportation that Medicaid covers is for doctor visits.

Her late husband, Bill, was hospitalized Sept. 21 this year; his small intestine died and he had eight surgeries in three weeks. A week before he died, Candie received a call that his heart had stopped. As she headed to the hospital, she checked her speed on a curve and suffered a broken wrist as the car went off the road. Bill died Oct. 13.

The two were high school sweethearts. “He was a jack of all trades,” Frawley said of Bill, “kept their house together, handyman.” He was a machine-repair specialist for 40 years before his retirement.

The only funds Candie can tap now come from Bill’s life insurance. She cannot touch her late husband’s retirement fund until she is 59½ in March.

Bill was fantastic helping Candie take care of their boys. Candie would stay awake most of the night while Bill slept; then he would get up and help out. Then Candie would sleep for a couple of hours, but now she gets only five or ten minutes’ sleep here and there. A lefthander, she is due to start therapy on the broken left wrist.

Tim was diagnosed with MD when he was 5 months old; Billy, 15 months. They go to a specialist every year and they also undergo therapy. “There is not really anything they can do for the condition and it is eventually fatal,” Candie said. She has a baby monitor in Billy’s room so that she can assist him during the night.

“These two boys are my heroes; they keep going every day, they don’t complain,” Candie said. “Every day they find something to laugh about. And their friends are devoted to them.” But Billy and Tim can’t go to church or the movies or have dinner with their friends.

Billy can only move his wrists to operate his wheelchair. He gets out of bed with help from two people and a Hoyer lift.

Tim worked for eight years repairing and selling watches at a kiosk at Great Northern Mall. “And he made so many friends there, security, maintenance,” Candie said. “A very outgoing friendly person.”

Candie had to walk him in and out of the mall in case he fell. Tim had to stand for eight or nine hours at a stretch because if he sat down on the stool, he couldn’t get up again. He took only two days a week off. He called in once when his grandmother died and once when he was in the hospital getting stitches because he had fallen and split his chin open. He is still looking for some kind of work that he can do from his wheelchair.

The trio gets help around the house from Candie’s father and uncles but they have their own physical issues. They make sure that the garbage gets to the landfill every week and they mow the lawn.Candie went through the Rite of Christian Initiation of Adults program at St. Stephen’s and later joined the RCIA team. “I was given a beautiful gift and I’m trying to share it with everyone that wants it,” she said. She is also an alto in the choir. But since Bill died, she has not been able to go to church because she can’t leave her boys alone.

“I’m working on trying to find someone to stay with them,” she said, “but I really need to be back in God’s house.”

Father Joseph E. Scardella, who became pastor of St. Stephen’s in September, has heard of Candie and Bill’s excellent service to the parish. He said in an email: “They worked in the Faith Formation Program, the RCIA process and volunteered for many parish events. You would never know the burden they carried because both were always ready to help and always with a smile!

“I am very impressed that our parishioners and Pastoral Council asked to undertake this great act of charity. Candie and her sons are certainly in great need. Without this van, they would remain homebound. …

“I am confident that St. Stephen’s through their generosity and prayers will make this happen. The parish has a strong and vibrant faith!”

St. Stephen’s choir member Paul Gilchriest, a fulltime structural engineer, goes over to the Goodnos’ house once a week to help Billy get out of bed and to help with the pellet stove and other household chores.

“When you see it firsthand,” Gilchriest said, “you realize how important this is, and so you want to help.” He summarized the appeal that the Goodnos’ friends made at Masses at St. Stephen’s and Church of the Holy Trinity in Fulton: “She’s a family member. She’s a parishioner. She’s been in ministries at the church for a number of years. She’s a family member that needs help.”

“We can’t do it alone,” said Toni Orlando, the music director at St. Stephen’s. She said that if everybody does a little bit, with the help of the Holy Spirit, a Christmas miracle is possible.

“Candie always has a smile on her face no matter what she’s going through,” Orlando said.

Candie explained why she smiles: “I have faith and hope.”

How to help
Different ways to make donations to buy a van for the Goodnos:
• Gofundme.com/CandiesVan
• Send check made out to Candie Goodno to St. Stephen Church, 469 Main St., Phoenix, N.Y. 13135-1950
• Drop off cash at church