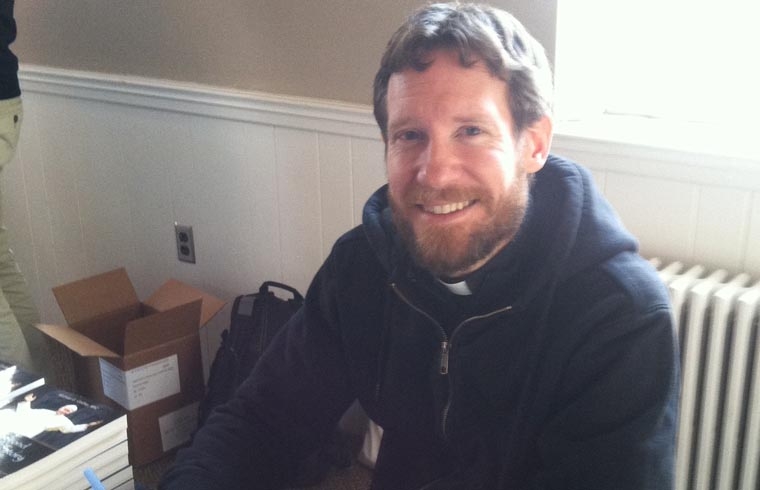 They came to get answers, to ask questions and to find out how to be part of the “new evangelization” movement in the church. Hundreds of Catholics gathered in the Empire Room at the New York State Fairgrounds April 24 and 25 to watch the first New Evangelization Summit simulcast from the Ottawa Conference and Event Center in Canada. Syracuse was one of 20 host sites across North America to present the broadcast, and the simulcast was sponsored by the diocese’s Office of Evangelization.

The idea of a New Evangelization Summit began as an abstract idea of Michael Dopp, founder of Mission of the Redeemer Ministries in Canada, who believed that by using technology there was a way to bring like-minded Catholics together at one time and share ideas on how to effectively evangelize in today’s world. Dopp had concerns about organizing an event of this size as he freely admitted during his opening remarks at the Summit, and no one was more surprised than he was that the idea continued to grow and take root with Catholics across the country.

“I kept thinking this was something that had never been tried before so I kept asking people, ‘This is a crazy idea, right?’ I kept hoping someone would say ‘Yes, it’s crazy.’ But everyone I asked thought it was a great idea so I realized it must have been an idea born of God’s heart,” stated Dopp.

The event even caught the attention of Pope Francis, who sent a letter of support to be read at the conference stating that he would be praying for all in attendance.

The Summit presented nine sessions with a total of eight speakers (including Dopp, who presented the first and last sessions) who are considered evangelization leaders internationally as well as within their local communities. Speakers included Dr. Scott Hahn, renowned author and speaker on the Catholic faith; Ken Yasinki, a popular Canadian speaker and the founder of Face to Face Ministries; JoEllen Gregus, operations director for Light the World Evangelization Ministries; Dr. Ralph Martin, president of Renewal Ministries, an organization devoted to Catholic renewal and evangelization; Father Michael Gaitely, MC, a member of the Marian Fathers of the Immaculate Conception and author of Consoling the Heart of Jesus, 33 Days to Morning Glory and The Second Greatest Story Ever Told: Time For Mercy; Father James Mallon, pastor of St. Benedict Parish in the Archdiocese of Halifax-Yarmouth in Halifax, Nova Scotia and the founder of the Board of the JP II Media Institute; and Patrick Coffin, co-founder of the indie film company Immaculata Pictures and the radio host of “Catholic Answers Live.” The Summit also included testimonials and music.

Catholics in attendance in Syracuse clapped when Hahn stated during his talk, “We have to enjoy being Catholic. Evangelization can only take place through contagious joy. Share joy with family members and friends. It is through friendship we will communicate the Gospel.”

In Syracuse, during breaks in the simulcast, attendees were given an opportunity to talk with each other or browse vendor tables. On Friday evening, Father Michael Gaitley, one of the Summit’s speakers, stopped by the Empire Room to sign copies of his books and speak to those in attendance about the conference.

“I think this Summit is a creative ,,way of using technology and media in the church and I am encouraged by it,” stated Father Gaitley. “I think Catholics will be encouraged by the conference and it will bring new creative ways of enlightenment to the future.”

Julie Seavak, a member of Most Holy Rosary Parish in Syracuse, came to the Summit to understand what evangelization is all about. “I’m older and I keep hearing the words, ‘new evangelization.’ I wanted to find out what’s new about it.”

The Paul family from Ottawa, Canada, traveled with their two children, Etta 7, and Jacob, 9 three hours to Syracuse after the Summit was sold out in Canada. Jacob, who attends Our Lady of Fatima in Ottawa, was especially excited to hear Dr. Scott Hahn. “I’m a big fan of his,” said Jacob. “We kept hearing about this event in church and I told my family we had to come.”

For Sara Shaheen, a member of Holy Trinity Parish in Fulton, attending the Summit meant hearing the different ideas and plans for the future. “I felt for a long while I was called to evangelization but I wasn’t sure how to get started. Now I will know.”