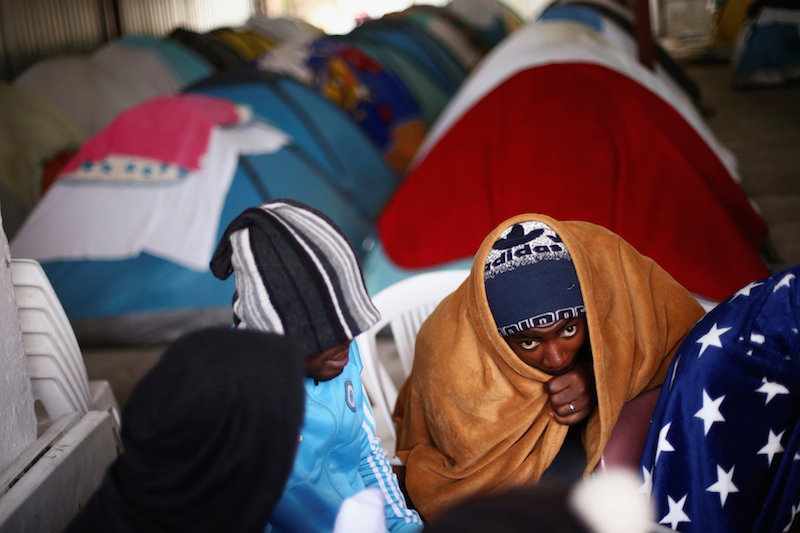 A migrant from Cameroon protects himself from the cold inside a temporary shelter in Tijuana, Mexico, March 14, 2018. Panelists during a Georgetown University discussion Feb. 4, 2019, in Washington, called for border policies that defend human life and dignity rather than criminalize migrants for seeking safety and economic stability. (CNS photo | Edgard Garrido, Reuters)

WASHINGTON (CNS) — The young Honduran woman caught the eye of Sister Norma Pimentel at the Catholic Charities-run respite center the nun oversees in McAllen, Texas. She was “real pregnant,” Sister Pimentel recalled. Her daughter, perhaps 3 or 4 years old, was by the woman’s side.

The woman “held out her hand and it was all disfigured,” Sister Pimentel, executive director of Catholic Charities of the Rio Grande Valley in the Diocese of Brownsville, Texas, told an audience at Georgetown University Feb. 4.

“The reason it’s like this is somebody entered my house and struck at my daughter to kill her,” Sister Pimentel recalled the woman telling her. “I put my hand there to save her. I was unable to go to the doctor or to the hospital. It healed on its own at home. I was cut here and here and everywhere.

“Had we stayed, we would not be alive today.”

The woman’s story is one of the many Sister Norma has heard since the respite center opened in 2014. The people come to the U.S. fleeing violence and poverty “because they are afraid for their children,” Sister Pimentel said during a panel discussion sponsored by the university’s Initiative on Catholic Social Thought and Public Life.

“You begin to understand that this is a group of people who are victims of crime,” Sister Pimentel said. “They are running away from that, and they are encountering that crime all along their journey until they arrive at the border of the United States with Mexico, always afraid, always hopeful that they would have a chance for life.”

The heightened dangers faced by people fleeing El Salvador, Honduras, and Guatemala prompted the four speakers during the program to call for government border policies that defend human life rather than criminalize migrants for seeking safety.

The 90-minute discussion, by design, largely sidestepped the issues surrounding President Donald Trump’s persistent push for a wall along the U.S.-Mexico border. Instead, it focused on the needs of the migrants and refugees as well as the biblical principles and moral responsibilities for responding to people in need.

A border wall or steel barrier has been the keystone of Trump’s immigration policy. He has claimed, without providing corroborating evidence, that a wall is needed to address what he considers a crisis at the border.

Sister Pimentel and Ashley Feasley, director of policy for Migration and Refugee Services of the U.S. Conference of Catholic Bishops, denied such a crisis exists.

“There’s some labeling about the wall that if you are opposed to the wall that you are for open borders. I don’t think that is necessarily the case,” Feasley said. “There’s a provision that can be made to provide border security and keep our country safe, but also talk about the fact that we need humane immigration reform.”

Catholic social teaching recognizes that countries have a right to protect their borders, she noted.

“But with that right comes a responsibility, and that responsibility is that that enforcement is humane and just and, frankly, transparent,” Feasley said.

Feasley also was critical of attempts to negotiate the rights of one group of refugees over another as political leaders debate a permanent funding bill for several government agencies as a Feb. 15 deadline looms.

Trump offered temporary protection for some immigrants in exchange for more than $5 billion in border wall funding during the recent partial government shutdown. His plan offered three years of protection from deportation for about 700,000 undocumented immigrants who were brought to the U.S. as children and received protection under the Deferred Action for Childhood Arrivals program and to people from certain countries who qualify for Temporary Protected Status.

While calling Trump’s recognition to protect DACA and TPS recipients a “positive development,” Feasley called the plan “illusory.” She said the U.S. Supreme Court has declined hearing an appeal of a lower court ruling that allows the program to remain in place without an end date.

“This is a negotiation and sometimes the problem here in Washington, and we’re removed from McAllen and the human reality, is that sometimes we put up people as negotiating chips. That’s terrible. We should never be sacrificing one group over another,” Feasley said.

Jesuit Father David Hollenbach, research professor at Georgetown University, called on society to remember the most fundamental moral principle when considering how to respond to people seeking assistance at the border.

While borders and state sovereignty matter, biblical tradition recognizes that people are responsible for welcoming and caring for others in need, Father Hollenbach said.

Panelist Galen Carey, vice president of government relations at the National Association of Evangelicals, agreed that borders are appropriate, and laws can determine who “belongs in this nation, whose home it is and who’s being invited in.”

At the same time, he said, “As a nation it seems to me that we have a responsibility, as Christians especially, most of all to demonstrate and bear witness to God’s love through Jesus Christ” in serving the immigrants and refugees.”

Opening the discussion, Georgetown senior Jaquelin Martinez invited the audience to join in “compassionate partnership” with immigrants rather than pity their situation and failing to act on their behalf.

As a DACA recipient, Martinez has experienced the ups and downs facing an immigrant family. Her father, Jose Balmore, fled his native El Salvador in 1998, six years after a brutal civil war ended. He was able to secure TPS in 2001 after the country’s devastating earthquake, allowing him to bring his family to the U.S.

However, he faces the prospect of having to return to El Salvador when TPS ends for more than 200,000 Salvadorans Sept. 9. That prospect concerns Martinez.

“Compassionate partnership … is not concerned about how bad you feel about the person suffering, but it’s rather focusing on the person undergoing the difficulty.” Martinez said. “When we learn to be compassionate, we think less of ourselves and how bad we feel for others and we are rather driven to act, to partner with these people to defend their dignity and humanity.”