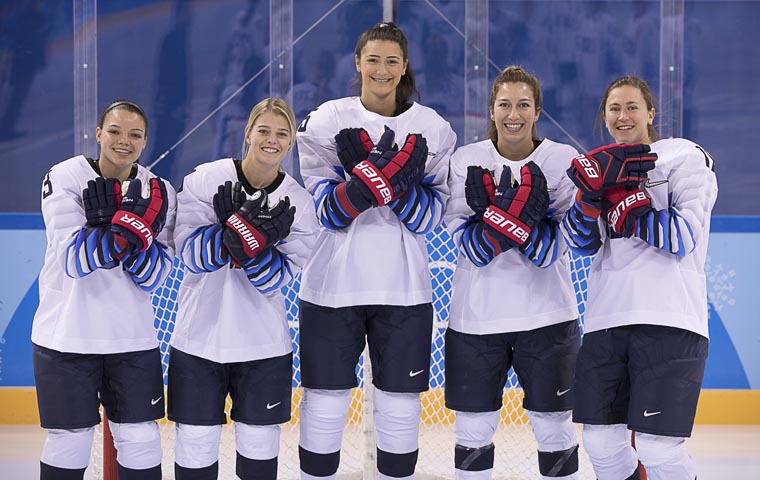 That’s because five players on the team’s roster of 23 are from the Jesuit-run school — two are recent graduates and three are current students taking a leave of absence for the Pyeongchang Games.

“We’re extremely proud of our Boston College players who made the Olympic team,” said Katie Crowley, head coach of the Boston College women’s hockey team. “It’s an exciting time for them and their families. They’ve done a tremendous job working to get themselves prepared, and it’s an awesome achievement for them. We’re just really excited for them.”

The Olympics are not new to Crowley, who competed three times in the Winter Games with the U.S. team, starting in 1998 when women’s ice hockey became an Olympic event. She also played on the team in 2002 and 2006. In the three games, Team USA won the gold, silver and bronze, consecutively.

Boston College also had two graduates and a student play on the 2014 Olympic women’s hockey team.

The three Boston College students on Team USA are Cayla Barnes, Kali Flanagan and Megan Keller — all defensemen. The Boston College alums on the team are Emily Pfalzer, defenseman, and Haley Skarupa, forward.

All five players are making their Olympic debut at the Pyeongchang Games. The women’s ice hockey event will conclude Feb. 22 with a game determining the gold medal winner.

In the early rounds of the 2018 ice hockey matchups, Team USA defeated Finland 3-1 Feb. 11 and beat the Russian athletes 5-0 Feb. 13. The team’s next game — leading up to the quarterfinals — is against Canada Feb. 15.

In 2014, Team USA was defeated by Canada 3-2 in overtime, just missing the gold medal.

With all eyes on the team this year, Boston College is not the only Catholic school connected to it. Hannah Brandt, a forward, attended Catholic schools in Minnesota. She attended St. Odilia School in Shoreview for elementary school and graduated from Hill-Murray High School in Maplewood.

But Boston College has one more connection to add to its Olympic ice hockey cap: The captain of the men’s team, Brian Gionta, graduated from Boston College and was the school’s men’s hockey captain in 2001.