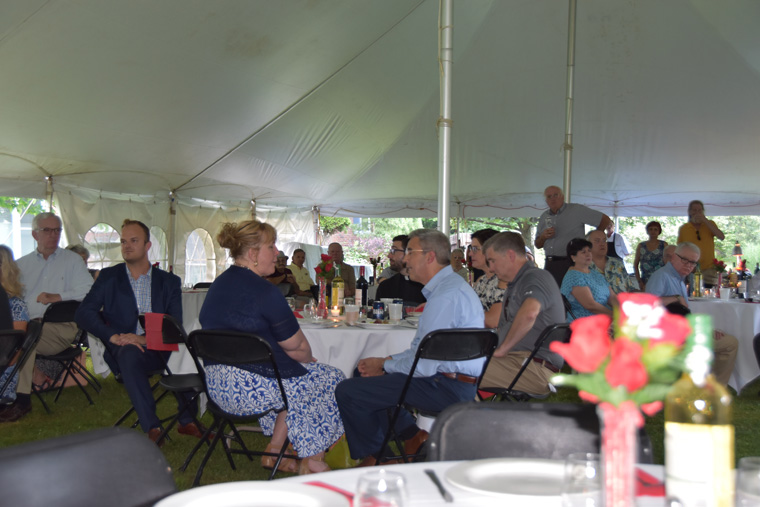 The blueprints were destroyed in a 1980s fire but the human details of the mansion unfolded easily — with laughter, some tears, and a sense of awe — July 18 on a hilltop in Syracuse.

Once the largest private house in the city, the converted Christ the King Retreat House and Conference Center celebrated its 75th anniversary under a big white tent.

In his invocation, Bishop Robert J. Cunningham asked the Lord to bless “all who have gone before us and prayed here on these grounds.”

From 1932 to 1934, the house was built on the city’s east side for $100,000 by Marjorie Lipe Stacy. Marjorie’s father, Willard Coughtry Lipe, and his brother Charles Ehle Lipe, were inventive farm boys from Fort Plain, N.Y., who came to Syracuse and set up a machine shop.

Included were a barn with three horses, a five-car garage, a marble aquarium the length of a room, a sports room shaped like a ship, living room/dance areas, and a pingpong room. New Year’s Eve parties included an orchestra.

At the foot of the hill on Brookford Road lived the young Gordon MacRae, who went on to fame as an actor. The mailbox for Marjorie’s family was at the corner of Harrington and Brookford roads — a half-mile from the retreat house.

On May 13, 1944, the Marjorie Lipe Stacy estate was purchased by the Society of Jesus for $45,000. Father Robert F. Grewen, S.J., who signed the purchase contract, became CTK’s first director (he was also the third president of Le Moyne College). Jesuits who succeeded him at CTK were Father Thomas Connolly, Father J.R. Dolan, and Father Vincent Ryan.

In 1994, Bishop Joseph T. O’Keefe purchased the mansion from the Jesuits for the Diocese of Syracuse for one dollar. Since then, CTK’s executive directors have been Fathers Michael Carmola, Mark Kaminski, John Rose, and, since April 1, Christopher Spilka, the first lay director.

CTK is open to all denominations, individuals, and corporate groups. Thousands of people visit each year. As they attend retreats and conventions, they enjoy the refurbished rooms, full dining service, gardens, pathways, outdoor pool, and even overnight accommodations.

Pricing for conferences can be found in CTK’s Pathways newsletter, posted at ctkretreat.com. People who wish to book a room for a private retreat are asked to call 315-446-2680 to check availability and pricing.

“Everyone enjoys coming here and just spending some time in solitude and prayer and reflection,” said Barb Shepard, the marketing coordinator.

Reflecting about her family’s history before the mansion was sold to first the Jesuits and then the diocese was Pamela Lipe Revercomb, Ph.D., of Cazenovia. She was one of several with a family connection to the mansion who attended the 75th anniversary celebration, including her brother Willard Charles Lipe, III and his wife, Susan Carrier Lipe, son Willard Charles Lipe, IV and daughter, Hannah Lipe; Allison Cross; and Sarah and Jordan McNamara.

Pamela’s grandparents Willard Charles Lipe and Eloise Estelle Hoyt died in a speedboat accident on the St. Lawrence River in 1929. They left three children — Pamela’s father, Willard Charles Lipe, Jr., Suzanne, and Gordon (“Tip”) Lipe — who then moved into the care of their Aunt Marjorie Lipe Stacy and her husband, Parker. With the influx, she added a third story to the mansion and the three children lived there with the rest of the Stacy family.

“He thought it was a REALLY cool house, because they could play hide and seek for hours,” Pamela recalled of her father. “And he loved the curved stairways coming down there, and they just had a lot of fun here. They had a swimming pool, they had horses, they could get on their sleds at the top of this hill and get across Genesee Street.”

Her dad (Bill Lipe), the middle of the three siblings, was the last of the three to move out of the house. He had to pack up everything left in the mansion until he had a place to store it. Bill had always wanted to be a dairy farmer, so after receiving an agricultural degree from Canton College, he bought a farm in Manlius, where Pamela grew up.

“There were boxes of beautiful dishes with gold on them and things like that kept in boxes in the cellar of the farmhouse for 67 years,” she said.

She added: “I grew up on a farm and I loved it, so for me, the house isn’t as important as the animals and the land, and that’s who I am. The fancy wealthy life is not something that my dad or I ever aspired to.”

Pamela’s cousin Allison Cross, of Skaneateles, reminisced about her mother, Suzanne Lipe Cross, who grew up in the mansion.

“They would talk to each other through the pipes in the bathrooms. … They would say spooky things,” Allison said.

Her mother had “very very long hair,” and one day she braided it. Her two brothers “kind of tied her hair up … and she was dangling” from a tree, “and I’ll never forget that story. … How can you possibly hang from your braids in a tree?”

Allison grew emotional talking about the mansion’s bronze doors, which are still there. One day when she was a student of fine art at Syracuse University, her mom visited and they made a trip of going back to the mansion. Allison created a brochure that when opened, shows a picture of those precious bronze doors.

“This place is so important to so many people,” said Shepard, the marketing coordinator.

Among those who view CTK as crucial to the diocese is Father Jason Hage, who in addition to being a pastor works in vocation promotion.

For the last four years, he said, the diocese has been hosting a discernment retreat “for all young men in the upstate … dioceses gathered here for prayer to discern more deeply God’s will for their life.

In each of those years, he said, “we’ve had a guy who has been on retreat here who has said yes to God’s call and now is in seminary formation.”

“Certainly after 75 years, there’s a lot of good work to be celebrated,” said Joseph Geglia, who has been CTK’s chairman of the board for about a dozen years.

Gathered at the 11 tables under the tent were many important supporters of CTK, including Jesuits, Father Rose, and Msgr. Ronald Bill, a former member of the board. Among Le Moyne College representatives was its president, Dr. Linda M. LeMura.

Chairman Geglia held a moment of silent prayer in remembrance of CTK Board member John F.X. “Jack” Mannion, who died in May. Mannion was a great help with fundraising, a great mentor, and a “great counselor to all of us, both board and staff alike,” Geglia said.

He thinks CTK has lasted 75 years “because that’s how God wanted it. And every time there was a need, the need was met, whether it was a small circumstance or a large circumstance, and just over the years one blessing after another.”

Geri Marx, of North Syracuse, told the assemblage that she and her husband, John, were there to “celebrate with you this wonderful place.” The Marxes were married on Christmas Eve morning 2005 at CTK. For several years after that, they came back with their family for the special Christmas Eve Mass.

“We were married here [by Father Carmola] and it was just a special place,” John said. “They said, the memories that are created here — that was one of them.”

In his “Remembrances of 500 Brookford Road,” the late Willard Charles Lipe, Jr. had written: “A bobsled could start at the top of the hill and travel across Genesee Street, ½ way up East Avenue. I know; I did it.”

The house was “so huge,” Pamela Lipe Revercomb said, and “I don’t think anybody ever felt like we needed that much space.”

But she thinks it is “awesome” how the diocese is using it: “They keep it beautifully, they take very good care of everything. They have a beautiful place to have a retreat.”

Out in Manlius on her family’s farm, they had a REALLY good sledding hill with a jump in the middle. That’s a housing development now, but the big hill at CTK still beckons.

“Who knows?” Pamela said. “You never know. I could sneak up here sometime in the winter. Get my toboggan out.”