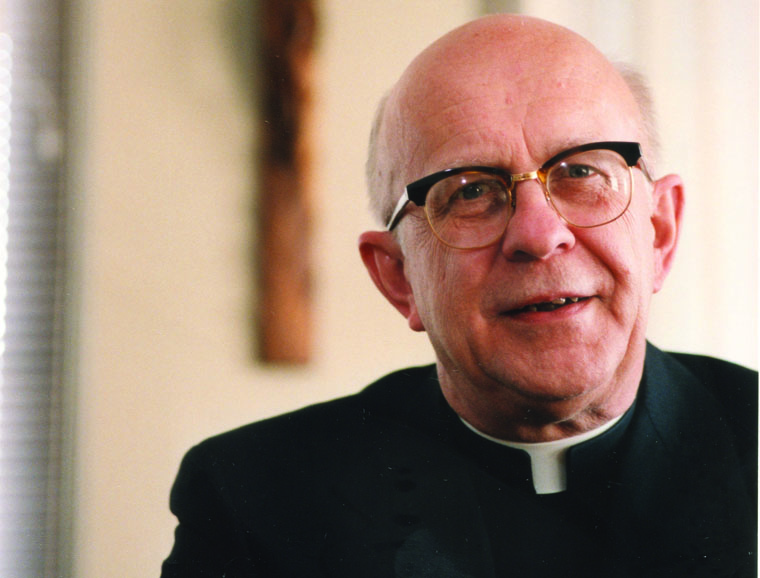 A native of Dayton, Ohio, Archbishop Pilarczyk, had been in declining health in recent years. He led the Cincinnati Archdiocese for 27 years until his retirement Dec. 21, 2009, the day after the 50th anniversary of his ordination as a priest.

Prior to his appointment as archbishop in 1982, he was auxiliary bishop of Cincinnati for eight years, also serving as director of educational services for the archdiocese.

“Among his brother bishops, Archbishop Pilarczyk was recognized as one of the outstanding churchmen of his time,” Archbishop Dennis M. Schnurr of Cincinnati, his successor, said in a statement. “They elected him not only president of what was then the National Conference of Catholic Bishops but also chair of every significant committee of the bishops’ conference.

“His accomplishments on the local level in his tenure as archbishop of Cincinnati were equally outstanding. He unselfishly devoted is entire priesthood to this archdiocese,” Archbishop Schnurr said.

“I have known and admired Archbishop Pilarczyk for more than 30 years. I shall miss his friendship, his graciousness and his wise counsel,” he added.

Archbishop Jose H. Gomez of Los Angeles, president of the U.S. Conference of Catholic Bishops, called the late archbishop a “shepherd close to his flock.”

“The archbishop led during challenging times but sought reconciliation and reform with humility,” Archbishop Gomez said in a statement released by the USCCB March 23. “Archbishop Pilarczyk was generous also in service to his brother bishops. We benefited greatly from his pastoral leadership.”

Retired Bishop Anthony M. Pilla of Cleveland was a seminary classmate of the archbishop beginning in high school in Cincinnati. He described the archbishop as a “loyal and caring friend who was brilliant and yet with a delightful sense of humor.”

“He was, to the core, a man of the church and served it well nationally and as archbishop. He will be missed, but well remembered,” Bishop Pilla said in statement released by the Cleveland Diocese.

Mercy Sister Sharon Euart worked closely with Archbishop Pilarczyk during his conference presidency while she was associate general secretary, beginning in 1988. “He taught me a lot about the church. I also learned a lot about episcopal leadership through him,” she told Catholic News Service March 23.

“He was a very gifted leader and a wonderful priest. He was a brilliant man, very, very gifted as a preacher, as a writer and as an administrator. He was a true disciple of Christ,” she added, calling him a dear friend.

Elsewhere, Washington Archbishop Wilton D. Gregory tweeted about his “dear friend and mentor,” lamenting that the consequences of the widening lockdown because of the new coronavirus would prevent him from attending Archbishop Pilarczyk’s funeral in Cincinnati.

“His wit &amp; wisdom were legendary &amp; will be missed,” the tweet said. “Alas his funeral liturgy will be private. I pray the Lord reward him with peace.”

Archbishop Pilarczyk wrote several popular books as well as pamphlets and articles explaining the Catholic faith. Among his books was the best-selling “Twelve Tough Issues: What the Church Teaches — and Why.” It later was revised and retitled as “Twelve Tough Issues — And More.” Recent works include “When God Speaks” and “Live Letters.”

His involvement in the church reached beyond Cincinnati as he served in several leadership positions within the bishops’ conference, including terms as vice president from 1986 to 1989 and president from 1989 to 1992. He chaired several conference committees, among them were those addressing education, liturgy and doctrine.

A ruptured brain aneurysm July 23, 1988, minimally slowed the Archbishop Pilarczyk. He resumed many of his duties about eight weeks after successful brain surgery. Writing in The Catholic Telegraph, the archdiocesan newspaper, seven weeks later, the archbishop described his health scare as “a special act of God’s concern for me and my life. It was a stroke of his love.”

In other capacities, Archbishop Pilarczyk served as chairman of the board of trustees of The Catholic University of America and chaired the International Committee on English in the Liturgy, the body that prepares English translations of the church’s Latin liturgical books and individual liturgical texts in accord with the Holy See’s directives.

In Cincinnati, the archbishop strengthened the archdiocesan seminary, Athenaeum of Ohio, building it into a training center for lay ministry, and its Mount St. Mary’s division for the formation of priests.

Archbishop Pilarczyk ordained more than 100 priests and three bishops during his tenure. The archdiocese reported he confirmed more than 74,000 people.

He also led the development of the archdiocese’s Futures Project, which led to new strategies to increase vocations while forming 100 pastoral regions in a structure that allows for the operation of current parishes with as few as 100 priests.

Although he had many successes, the archbishop also was troubled by the clergy sexual abuse crisis. In 2003, he chose to appear in Cincinnati courtroom as a judge convicted the archdiocese of failing to report sexual abuse. The case marked the first time any U.S. Catholic institution was convicted of such a crime.

Archbishop Pilarczyk was not charged with wrongdoing himself. In his final homily before retiring, the archbishop said he regretted what had happened. “I made some inadequate decisions and people got hurt and I’m sorry,” he said.

Archbishop Pilarczyk was born Aug. 12, 1934. He studied at the Pontifical Urban University in Rome prior to ordination in 1959. He obtained a doctorate in sacred theology from the school in 1961. He also held a master of arts in the classics from Xavier University and a doctorate in the same field from the University of Cincinnati. Every major college and university Cincinnati award the archbishop an honorary doctorate, including Hebrew Union College/Jewish Institute of Religion.

At his retirement Archbishop Pilarczyk was the longest serving active bishop. In retirement he continued administering the sacraments at parishes throughout the archdiocese.

Because of the COVID-19 pandemic, Archbishop Schnurr will celebrate a private funeral Mass at St. Peter in Chains Cathedral in Cincinnati March 27. The Mass will be livestreamed at the archdiocesan website, www.catholiccincinnati.org.

Diocesan officials said a public memorial Mass will be scheduled at a later date.