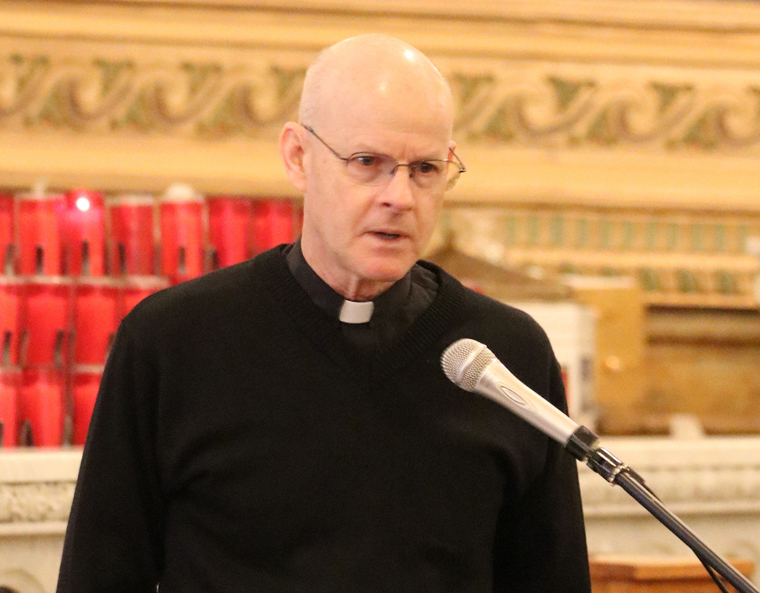 The Commission on Women in Church and in Society sponsored a women’s mini-conference on Nov. 13 at St. Joseph–St. Patrick Church in Utica. The half-day program began with recitation of the rosary and the Holy Sacrifice of the Mass with main celebrant Msgr. Stephen J. Rossetti and concelebrant Father Richard J. Kapral.

Following Mass, Msgr. Rossetti presented a talk called “Spiritual Warfare Today.” Currently working as an exorcist for the Archdiocese of Washington, Msgr. Rossetti earned a Ph.D. in psychology from Boston College and a doctor of ministry degree from the Catholic University of America. He is the president of the St. Michael Center for Spiritual Renewal and author of over a dozen books, including his latest, Diary of an American Exorcist.

Holding his rosary in his hand during the entire presentation, he began with a binding prayer over the women, asking in the name of Jesus Christ to sever all bonds with satanic forces, render any evil spirits impotent and bind them in the Blood of Jesus. “Many people, including priests, don’t believe in Satan,” he continued, but Scripture proves this untrue. “If you cut out all the quotes about angels and demons from the Bible, it would look like Swiss cheese.” In fact, Jesus began his public ministry by going into the desert, where the demons dwelt, and overcoming Satan, and ended it on the cross, “smashing Satan’s kingdom forever.”

Based on his experience, Msgr. Rossetti believes that demonic activity has been on the rise recently. Discord, chaos, violence and hatred of the Catholic Church are some of Satan’s footprints, including 95 acts of violence against Catholic churches in the past year. “But remember, where evil abounds, God’s grace is more abundant.”

One explanation for the increase in evil is a decline in the Christian faith. “People are not being taught basic things like God is good, Satan is bad; sin is bad, virtue is good.” An innate yearning for the spiritual can lead them to explore occult practices such as tarot cards, Ouija boards, the New Age movement, witchcraft and satanic cults.

Msgr. Rossetti described the attraction of young women to modern witchcraft in America as a reaction to feeling powerless and an attempt to regain power. They think that “there is a feminist power that they are invoking, but they are actually invoking Satan’s power. Satan is manipulating them.” He displayed an image of a modern witch, glamorized in a fashion article. Called “spirits of divination,” Msgr. Rossetti went on, “demons of divination are tough to get rid of.”

When he evaluates a case, he places the person at a point on a line that runs from full liberation at one end to full possession at the other, with intermediate stages of oppression, obsession and partial possession. “Only a priest with special faculties can perform a solemn exorcism, for a person who is fully possessed.”

“Every one of you has been tempted by Satan and will continue to be until your death,” Msgr. Rossetti told the women. The normal means of getting Lucifer out of your life is living the Catholic faith, Msgr. Rossetti said: going to confession (he recommends at least once per month), going to Mass, praying and living a virtuous life. “Trust in Jesus.”

He suggests using the resources on the St. Michael Center website catholicexorcism.org or downloading the app “Catholic Exorcism.” His book Diary of an American Exorcist is available locally at the Catholic Shop at 201 E. Laurel St., Syracuse, or from Sophia Institute Press.

The final mini-conference of 2021 concluded with Adoration of the Blessed Sacrament, Benediction and Confession. Visit syracusecatholicwomen.org in the future for information on our 2022 Lenten retreats.

Nancy Huffaker is a member of the diocese’s Commission on Women in Church and in Society.