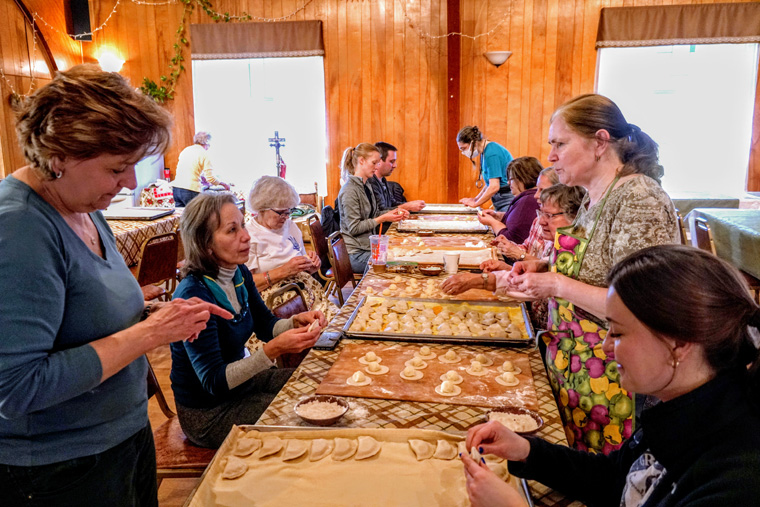 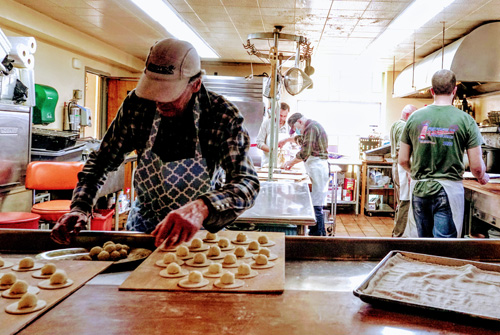 Jim Hutchins (foreground) and St. Volodymyr kitchen staff and volunteers worked 12-14 hours a day to prepare the first week’s orders of pierogies in the kitchen war they’re waging against suffering caused by the Russian invasion of Ukraine.

For the Irish in Utica and elsewhere, the pipes and the drums of this year’s celebration of the patron saint of Ireland have faded into silence, but in hearts and minds of the Ukrainians in Utica and worldwide, other drums, the drums of war, are far from silent. At St. Volodymyr the Great Catholic Ukrainian Church in Utica, named for Ukraine’s patron saint, parishioners are doing something about it.

While they cannot manufacture guns, tanks or jet fighters to defend their homeland, parishioners of the church, named for the patron saint of Ukraine who brought Christianity to Eurasia and Ukraine, are battling the terrors of war wreaked on refugees, orphans and in many cases, their own family members still living in the distant homeland. 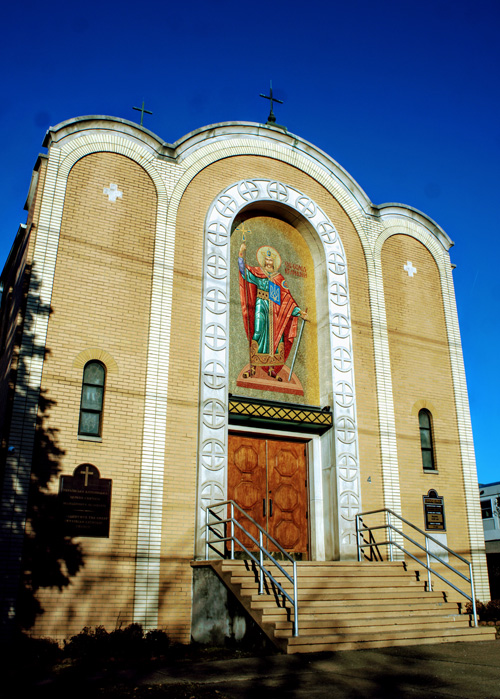 St. Volodymyr the Great Church on Cottage Place in Utica is battling Putin with pierogies; 12,000 were sold. The church is located adjacent to Munson-Williams-Proctor Arts Institute in downtown Utica.

That day, Cottage Place, which feeds traffic to both the church and Munson-Williams-Proctor Arts Institute opposite it, was jammed. “We were ‘slammed’ from 10 a.m. until 2 p.m.,” church officials said.

The volunteer team, consisting of a 50/50 mix of church members and community volunteers, used 500 pounds of flour, 200 pounds of cabbage and onions, 500 pounds of potatoes and untold pounds of cheese in producing those 12,000 pierogies sold on that busy Friday.

In the past, food fundraisers at St. Volodymyr’s were dedicated to funding the maintenance of church grounds and buildings and augmenting contributions and bequests from a membership in decline.

The Russian invasion of their homeland galvanized the church to direct the income from the pierogi fundraiser to relief efforts in the homeland. “We did it at warp speed,” said project coordinator Zyn Jackiew, a Utica-area real estate broker and parishioner.

The ominous assembling of the Russian military and the dire predictions of a Russian invasion echoing throughout the world had many outside the borders of Ukraine nearly sure of  war.

Jackiew shed light on a very different pre-invasion mindset among Ukrainian citizens, which he had learned from parishioners’ communications with families and friends still in the country. “The Russians have been on Ukraine’s doorstep for centuries. Locals thought that the Russian presence and the recent maneuvers were just military drills. It was a surprise to them when the actual invasion occurred.”

While the Utica church was gearing up at warp speed for the kitchen war against suffering in their homeland, church officials were just as busy making certain that the funds raised were sent to responsible and effective organizations that would put the funds to the uses the parishioners intended. They felt confident in two conduits for the funds.

The first are selected Catholic organizations in Ukraine that use the funds to obtain clothing, food and anything else needed to relieve the tragic homelessness and hunger of refugees and orphans displaced by the Russian invasion.

The second, in nearby Schenectady, is a group led by a former medic in the Ukrainian Army, Ivan Shvachuk, MD, of Ellis Medicine in Schenectady. The team assembles combat-trauma field kits for Ukrainian fighting forces and citizens caught in the crossfire. The kits include slings, bandages, tourniquets, gauze, tracheal insertion tubes and heart medicine. Kits are shipped to the organizations’ contacts in Poland and Ukraine and then sent to front-line military in the field.

Preparing for an extended fundraising run while hoping for a quick end to hostilities, Jackiew assures that the St. Volodymyr the Great Church’s fundraising project “will continue as long as the conflict continues in Ukraine and the people need our assistance.”