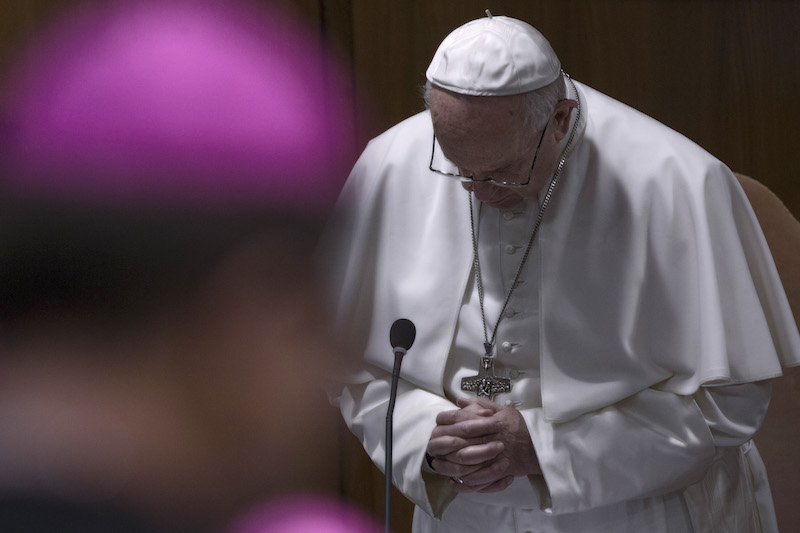 Pope Francis prays Feb. 22, 2019, the second day of the Vatican meeting on the protection of minors in the church. (CNS photo | Maria Grazie Picciarella)

VATICAN CITY (CNS) — The Catholic Church should re-examine how “pontifical secret” is applied in clerical sex abuse cases so there is greater transparency in the cases and it is not invoked “to hide problems,” said a canon lawyer and Vatican official.

Linda Ghisoni is a canon lawyer who serves as a consultant for the Congregation for the Doctrine of the Faith and is undersecretary for laity at the Dicastery for Laity, the Family and Life. She was the first woman to give a major presentation at the Vatican summit on child protection and the clerical abuse crisis.

Addressing the summit Feb. 22, Ghisoni described bishops’ accountability, regular audits, and lay review boards as essential to demonstrating with facts a profession of faith in the church as a communion of the baptized, each of whom are given gifts by the Holy Spirit and are called to share those gifts for the good of the church and the world.

At the end of her speech, Ghisoni suggested reviewing “the current norm on the pontifical secret.”

Already in September 2017, members of the Pontifical Commission for the Protection of Minors asked Pope Francis to reconsider Vatican norms maintaining the imposition of “pontifical secret” in the church’s judicial handling of clerical sex abuse and other grave crimes.

The secret ensures cases are dealt with in strict confidentiality. Vatican experts have said it was designed to protect the dignity of everyone involved, including the victim, the accused, their families, and their communities.

Ghisoni said there are values to protect, including the good name of the accused, unless and until he is proven guilty, but a revision could lead to “the development of a climate of greater transparency and trust, avoiding the idea that the secret is used to hide problems rather than protect the values at stake.”

The second day of the summit was dedicated to accountability, and Ghisoni focused her remarks on how accountability is not simply a good practice from a public relations and organizational point of view, but that it is a necessary part of a church living its reality as a community.

“A bishop cannot think that questions regarding the church can be resolved by him acting alone” or only with other bishops, she said. Every member of the church is called to work together to ensure that children are safe.

She urged bishops to not resist having regular audits of diocesan safeguarding policies and of the ways he or he and his review board have handled allegations.

An audit, she said, “must not be misunderstood as mistrust of the superior or bishop, but rather considered an aid” for examining actions taken and sharing responsibility for them.

“Identifying an objective method of accountability not only does not weaken his authority,” she said, “but it values him as the shepherd of a flock” whose responsibilities are “not separated from the people for whom he is called to give his life.”

When a bishop works together with priests, religious and laypeople in designing procedures and accountability models, she said, mistakes and errors are not a “stain” on the bishops’ honor, but a call for all involved to find a way to repair the damage and ensure it does not happen again.

Safeguarding children and fighting abuse must not be “a program” for the church, she said, but “must become an ordinary pastoral attitude.”

The church, he said, is not an “organization,” but is “a family born of mother church,” which the bishops should keep in mind as they continue their deliberations.