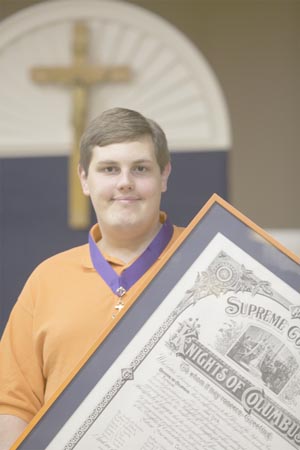 So why is their Knights of Columbus council struggling for membership?

That’s a question Darien Clark, grand knight of the Blessed Mother Marianne Cope Council 14260 at S.U. has been asking himself.

The official membership for the council is around 40, but that includes members from the group that the S.U. council is trying to help get started at Le Moyne College.

The council was started in 2006 by Stephen Terzolo, a junior at S.U. at the time. He drew in lots of his friends as well as members from Upstate Medical University and SUNY College of Environmental Science and Forestry, and the council was recognized by the Supreme Office in 2007.

But most of that first wave of council members have since graduated, and Clark is the last of the group left.

“This is the fewest active members since I’ve been here, since 2007,” Clark said. “We probably have done more this year, just out of necessity because we need people.”

This year, the council tried to draw in numbers with a schedule of activities during the first few weeks of school. They started strong with that irresistable lure for any undergraduate: free food. There were brunches after morning Mass and after 1 p.m. Mass, there were pizzas and a barbecue.

Then there was a retreat at Alverna Heights, a trip to the amusement park at Darien Lake, a trip to the State Fair. There was pumpkin picking and apple picking. The council hosts a monthly lecture series, a movie night and will help put together a haunted house this weekend at Newman House.

A few freshmen showed up to some of the events, but no one committed to anything.

“I don’t have one new member,” Clark said. “When you’re putting so much effort into it, in my case probably too much effort, and when you really have nothing to show for it in terms of active new members, it’s very frustrating.”

Part of this lack of interest may be general apathy on the part of the students, but Clark said he’s more inclined to think it has something to do with not getting the word out.

“The knowledge about the Catholic center even existing is not very good,” Clark said. He said he thinks that the number of students attending Masses at Alibrandi has fallen as well, and this may be because the center needs to do more to promote itself. Clark said he knows the Catholic students are out there.

Each year, incoming students at S.U. fill out forms on which they have the option to claim their religious affiliation. According to Hendricks Chapel, the interfaith chapel that keeps the records on these forms, Catholics make up the largest percentile of claimed members at 18 percent. Other faiths include the Jewish faith at nine percent and Lutherans at one percent. By far, the largest percentile overall belongs to those who have ticked “no preference.” This figure, which represents students who are open to faith but reluctant to claim any one in particular, comes in at 50 percent.

Clark said the Knights of Columbus council is not recognized by the University because they require members to be Catholic men, and this means they practice a sort of discrimination. Since the council isn’t recognized by the university, they can’t advertise on campus, only on a board provided by Hendricks Chapel by the coffee shop in its basement. “Actually it’s not a bad spot in terms of traffic,” Clark said.

Clark, a parishioner of Immaculate Conception Church in Fayetteville, admitted that despite being a “cradle Catholic,” he’d never even heard of the Knights of Columbus until he went to college.

Initially, he enrolled at Quinnipiac University in New Haven, Conn. This is the same city where the Knights of Columbus were originally founded in 1881.

Clark said during his freshman year, the university was starting a council and he became involved. “Very fortunately for me, I went right to where they were founded.” He said he had been an active member of church ministry before, “and this just seemed like a group that looked like something that I wanted to be a part of.”

When he transferred to S.U., Terzolo approached him to become a member of the newly-formed council there.

The council is part of the St. Thomas More Catholic Campus Ministry at the Alibrandi Catholic Center. Like any other Knights of Columbus council, the S.U. council strives toward the four pillars of the order: charity, unity, fraternity and patriotism. As much as possible, Clark said, the council tries to incorporate activities that will include all four of these aspects.

“‘Unity’ can be a very ambiguous term. Of the four, that can be the toughest,” he said.

In the past, the council’s activities have included organizing Masses, cleaning up around the Alibrandi Center, tutoring at local schools and a May Festival for children.

While there are councils with larger numbers of members, such as Notre Dame Council 1477, these councils are much older than the one at S.U. and include alumni on their records. Notre Dame is the oldest college council, and it will celebrate its 100th anniversary next year. The number of active members on the Notre Dame campus will be much smaller than the membership figures it has, Brewer said.

Brewer said council members need to approach recruitment in a different way than they might for other university groups or organizations. The Knights of Columbus is a lifetime vocation of service, Brewer said.

Brewer said that there must be 30 members on a council in order for it to remain active, but he said he thought the council at S.U. was actually doing very well.

Clark has reason to think that things may be looking up for next year. After the Family Weekend Mass celebrated on Oct. 25, five new members approached him wanting to learn more.

After all the events, meals, and trips, what was so different about this Mass? “The bishop,” Clark said. “Just the fact that he was there, we were able to capitalize on that to get our name out there.”

Clark has scheduled a ceremony to begin the proces of induction for new council members during the first week of November.

“We’ve given this our best shot,” Clark said. “All we have is to keep going after people.”

For more information on the Blessed Mother Marianne Cope Council 14260 at S.U., visit the council’s website at www.suknights.weebly.com. Clark can be reached at Dnclark@syr.edu.