Want to add to hope, joy, reflection, healing? You can do Advent 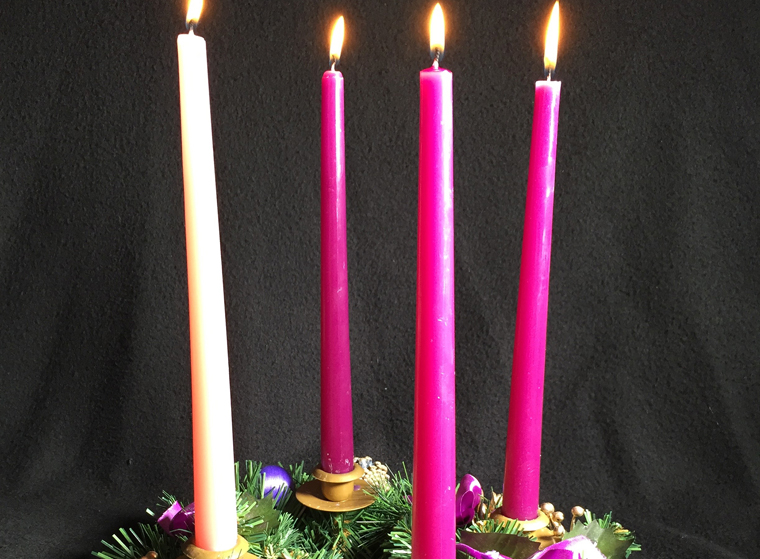 WASHINGTON (CNS) — Compared to Christmas, Easter and Lent, Advent is the Maytag repairman of liturgical seasons. Hardly anybody calls on it.

To many, Advent may seem like four weeks of the priest wearing purple vestments at Mass, while people are otherwise hurtling about trying to get ready for Christmas. The sentiment is understandable, since Walmart posted Christmas displays in stores even before Halloween was over, and some radio station in virtually every city of any size has been playing nothing but Christmas songs since before Veterans Day.

But if Catholics do take time for Advent, which begins Dec. 1 this year, they can find it to be a meaningful season.

“I love Advent!” said Kim Smolik, CEO of the Leadership Roundtable. “I love that Advent is a time that we have an opportunity to reflect on the many blessings in our life and to show our gratitude.”

“I know we get pulled in other directions,” Smolik added, but advent is for her “a time to slow down and to be with people. That’s what I think the season is about.

Given the scandals that have scarred U.S. Catholicism over the past year and a half, Smolik said, Advent can be the time for Catholics to ask themselves, “How can I contribute to the healing in our church? What new life can I bring to the church and how can I bring that forward in the next year?”

Smolik said one help for her is a Nativity scene. “I think that is putting our focus on Jesus, on healing, on light, on hope,” she added. “I think we can use that nativity scene in our home. We can sit and be present at a place of meditation and prayer.”

Catholic Extension, which provides material and spiritual assistance to mission territories in the U.S. church, promotes a concept called “Meet Your Creche,” catholicextension.org/nativity. “The way that I’m going to meet my creche through the lens of Catholic Extension and as a Catholic is really through an encounter with the poor,” Boland told Catholic News Service.

“Pope Francis keeps calling us to this idea of encounter. For me, for us, the creche and the Nativity scene is a moment of encounter. It’s Christ encountering the world in a very unique and special way now,” he said.

“It’s going be my moment with my own kids — they’re 10, 8 and 6. They know their dad goes out around the country and meets a lot of kids. We have to pay attention to one really important to think about the creche. Jesus is born into poverty, and from poverty, we learn a lot.”

He spoke of the hope people in Puerto Rico have despite the devastation they have suffered. Catholic Extension has ministered in Puerto Rico for a century, yet many are “recovering from the still-devastating effects of Hurricane Maria. Two years later and still absolutely no rebuilding yet,” Boland said.

“But people still talk about their hope and God’s solidarity with them as a people,” he said, and “a sense of joy that God has given them life and they’re going to use the best of their ability to help them and their neighbor.”

The destruction there includes hurricane damage to 20 churches, yet people are “going out and still meeting their neighbors.”

He recounted the tale of a Puerto Rican boy whose father has to work far away from home to earn money for the family. When the subject of Christmas came up, the lad’s idea, according to Boland was: “We can put our gift in the front, and Dad will come home.”

De La Salle Christian Brother Javier Hansen, a religion teacher at Cathedral High School in El Paso, Texas, sets out to instill habits his students may not have in cultivating Advent customs.

“A lot of our students cross the border (with Mexico) every day. I envy them in some sense because they go home and pray the rosary together,” said Brother Hansen, adding that earlier in November, he “went over with them.

He noted that various institutions have their own calendar — the school year, the monthly calendar and “the church also has a liturgical year that begins in Advent.”

A big fan of Advent music, Brother Hansen said he’ll sit with his students and sing Advent songs with them.

“Advent tells a real story of our faith,” he added. “Part of my job is to write reflections to the parents and the larger school community on virtues such a patience. That’s a big virtue that’s associated with the season.”

Students, he said, “need a small reminder at times that secular society’s not helping us all the time when they’re putting Christmas ornaments in stores and everything, and (make it seem) that Advent doesn’t exist. That’s not their main intention, but that’s kind of what it’s doing to us.”