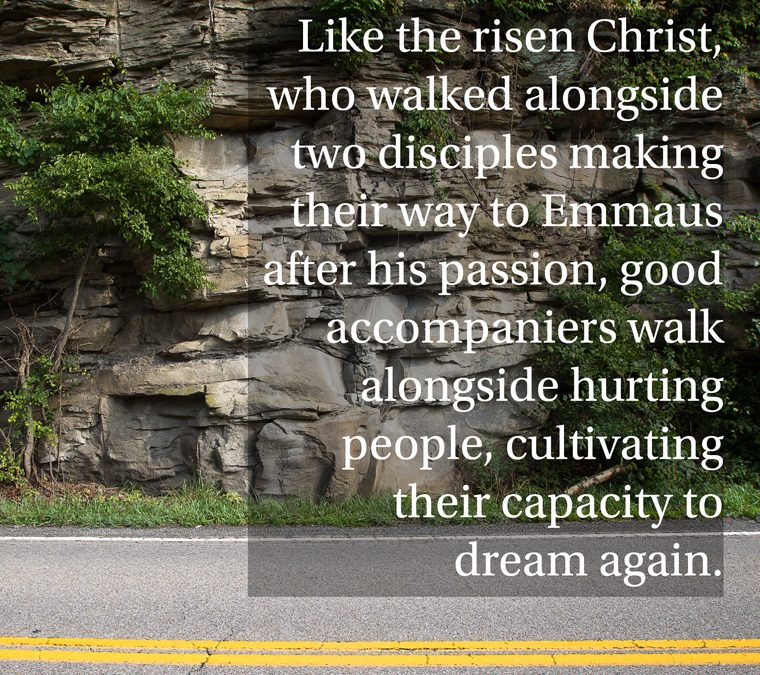 It ranks among life’s biggest temptations. Confronted by a highly difficult, ongoing life situation that feels overwhelming, a call to surrender hope begins to form within. Its tempting, weary words go like this:

“I have tried everything. Nothing works. I’ve given everything I possibly can.”

This kind of situation might involve you, or me, or someone else. Perhaps it emerges after a disappointing job loss, the decline of communication in a marriage, the impact of a death in the family or any number of other demanding situations able to leave a person feeling disheartened or at a loss for hope.

My personal desire to serve as a problem-solver may fall short in such situations.

The parable of the barren fig tree in the Gospel of Luke (13:6-9), familiar in Lent, involves such a temptation. Broadly speaking, it addresses the temptation to conclude that good reasons sometimes justify hope’s surrender.

As parables do, this one indicates that the most predictable response to a challenging situation may not be the most worthy response, particularly in God’s eyes.

For three years an orchard’s fig tree produced no figs. The owner then proposed that the gardener “cut it down.” It was exhausting the soil that held it.

Give the tree more time, the gardener recommended. “I shall cultivate the ground and fertilize it; it may bear fruit in the future.”

The gardener wanted to provide the tree a new chance to live.

Foreclosing on hope is never the solution the Christian vision proposes for difficult situations. But if I have tried everything I know of, the next step may be to try something I have not yet considered.

Maybe it is time to consider what it means to say that God’s ways are not my ways. Maybe it is time to ask whether my plans and formulas are insufficient to this situation. Among Christians this is the stuff of spirituality and prayer. It is a call to spiritual growth.

Surrendering a sense of self-sufficiency in the face of this outsize challenge could be a good thing. Benedictine Father Benoit Standaert says in “Spirituality: An Art of Living” that “left to our own devices” we may be led into a rather “exhausting life.” He writes:

“Great fruitfulness springs from a life that maintains access to the Source. … The key thing is to safeguard the true source of vitality, and we do that by a slight shift in the center of our existence. ‘I live, no longer I, but Christ lives in me’” (Gal 2:20).

Let’s assume that the difficult situations I mention involve not me or you but someone else whose hopes appear dashed. Should prayer on behalf of this person adopt a new form, asking God to enable us to see and hear that he already is working in his or her life?

Listening more than speaking is one avenue to knowing this person in a new way. Prepare to be surprised. Attentive listening could provide hints of the way God is active here and now, though not in the way presupposed — not in “my way.”

The final document of the October 2018 session of the world Synod of Bishops on young people includes a valuable discussion of listening. It calls listening “the manner in which God himself relates to his people.”

It views listening as a way to demonstrate respect for someone else. Listening, it points out, “requires humility, patience, readiness and a commitment to formulate answers in a new way.”

An added benefit is that listening “transforms the hearts of those who do it,” according to the synod. Listening approaches others in a way that allows their own questions “to emerge in their freshness.”

So listening is part of a dialogue, a two-way interchange. Pope Francis talks about a “personal dialogue” in which another person “speaks and shares his or her joys, hopes and concerns.” It is a gentle and respectful dialogue.

Listening is one way to “accompany” another person. Pope Francis frequently highlights accompaniment as a crucial need of our times.

The 2018 synod’s document provides a “profile of the accompanier,” who should be “balanced, a listener, a person of faith and prayer who has the measure of his own weaknesses and frailties.”

A “good accompanier” does not try “to impose his own will” on others, or take “center stage,” or adopt “possessive and manipulative attitudes that create dependence,” the synod document insists.

A revitalized sense of hope, the hope of making a fresh start, is needed in very difficult human situations like those I describe. “Hope means we have a future,” Archbishop John Quinn said in 1995.

But “hope is not the absence of the cross,” according to this former San Francisco archbishop. Hope, nonetheless, unleashes “the energies of imagination” so that “we are not afraid to dream.”

Like the risen Christ, who walked alongside two disciples making their way to Emmaus after his passion (Lk 24:13-35), good accompaniers walk alongside hurting people, cultivating their capacity to dream again.