‘We are all its guardians’ 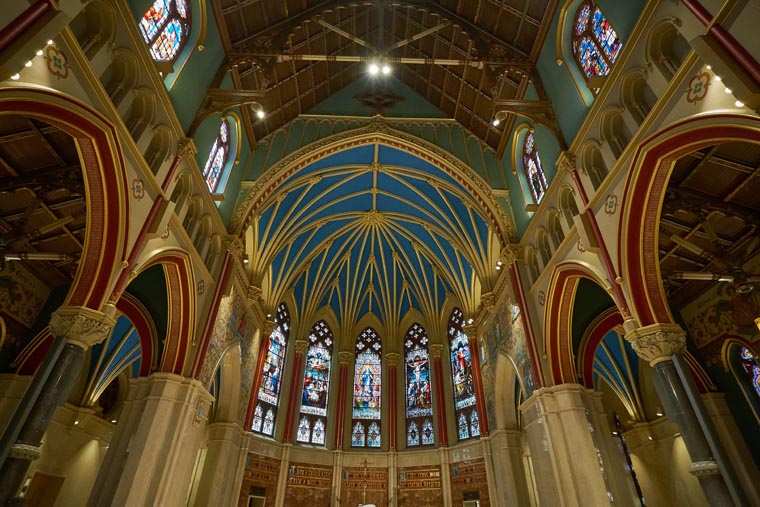 Following restoration, Cathedral of the Immaculate Conception is readied for rededication Sept. 8

More than a century ago, faithful Catholics sacrificed together to build the church that would become the heart of the Diocese of Syracuse. Today, that church, the Cathedral of the Immaculate Conception, has been restored and renewed through the generosity of today’s faithful, ensuring it will remain the heart of the diocese for another century to come.

The cornerstone of St. Mary’s Church was laid in 1874; in 1904, the church was formally designated the Cathedral of the Immaculate Conception. Over the years, renovations updated the structure to meet the needs of the faith community. In 1958, in-floor heating was installed and the interior walls were painted. In the 1980s, the tabernacle and the baptismal font were relocated, among other updates.

By 2015, years of use and Upstate weather had taken a toll on the structure, leading to a leaky roof, cracking floors, outdated utilities, and inadequate facilities. The diocese convened a committee to create a plan to restore the Mother Church of the diocese. The committee was chaired by Jim Tuozzolo, chairman of the Facility Planning Committee of the diocese, and included members of COR Development Company, Hueber-Breuer Construction, Pyramid Brokerage Company, the Cathedral parish, and the diocesan Finance Council, according to John Barsanti, diocesan Chief Operating Officer and Chief Financial Officer.

The first phase of the restoration began in February 2016. A gathering area, able to accommodate more than 250 people, was created in the former daily Mass chapel space. New and expanded restrooms were created. In the adjoining parish center, classrooms, meeting rooms, and office space were outfitted with needed technology. Three priest residences and one guest room on the top floor were renovated. A new elevator provides access to the building for all. Utilities were replaced and structural repairs were made throughout.

The second phase of the restoration, addressing the Cathedral itself, began in January 2017; the main church was closed after Easter to allow for interior work. The roof; flooring; and electrical, heating and cooling, lighting, and audio systems were replaced. The main and side altars were restored and the tabernacle returned to the original high altar. The walls, ceiling, and masonry were also repaired and restored — resulting in perhaps the most striking aspect of the restoration.

Walls that had been a neutral beige now bear rich shades of green, red, and gold. The dramatic arched ceiling of the sanctuary, previously a soft blue, is now a vibrant cobalt.

The beige tones were not original to the English Victorian Gothic-style Cathedral, explained Troy Joseph Simmons, whose firm, McPherson, Simmons Bros. & Sons Architectural Design Studios of New Jersey, provided liturgical design direction for portions of the Cathedral’s restoration. Rather, the beige was introduced during a 1950s restoration as a means of modernizing and subduing the original decorative pattern, Simmons said.

Simmons’ firm looked to the Cathedral’s history to shape its future. “It’s kind of our studio motto: ‘rooted in history but not historicity.’ We do all our historical study, all the research,” he said. “We use what we discover about the historical to inform going forward.”

With no existing documentation of the Cathedral’s original color scheme, MPSB drew on the period during which the Cathedral was built — the 1870s — and the work of “godfather of English Victorian Gothic” Augustus Pugin. The firm also took into account the colors present in the decorative patterns on the ceiling beams and trusses and in the angels depicting the Litany of Loreto that run along the side walls. From there, MPSB created the color palette and the palette of stenciling for the restoration.

As work to repair the plaster walls began, layers of history were revealed.

“Behind the layers of tan paint we found evidence of the original border colors and the original trim colors,” Simmons said. “Above the wooden wainscoting there was about a 12- to 18-inch border… and the palette was green, burgundy, gold, a little highlight of a little blue dot, but primarily the same colors that we ended up choosing on our own.”

“So I like to think the architect would approve,” he laughed.

Overall work on the restoration project was led with oversight from the diocesan Facility Planning Committee and Hueber-Breuer Construction. Operational and financial support was provided by Barsanti and the diocesan Finance team. Daily operations were overseen by Ed King, Mike King, and Scott Clements of the diocesan Facilities team, in cooperation with numerous vendors and suppliers (see below).

Phase two exterior work will continue following the Cathedral’s Sept. 8 rededication. This work will include repairing the statuary above the main doors, repairing the front stairs, and replacing the landscaping around the church.

“To be a part of this historical restoration has been most exciting,” Msgr. Neal Quartier, rector of the Cathedral, told the Sun in an email. “It has been an inspiring and an amazing blessing. Having had the honor of being the rector for 12 years and living in residence for over 30, this Cathedral has been a significant part of my life and to see it restored has been such a gift. To have a role in this restoration has been an honor.”

“This iconic structure at the center of Columbus Circle stands as a symbol of the faith of our ancestors, which has been handed on to us to preserve and pass on,” he continued. “This is the Church of the diocese where all are welcome. It is the center-point of the Cathedral Square neighborhood as well as the city of Syracuse, offering all weary travelers a place to rest in the presence of God.”

The total cost of the restoration project is currently estimated at $11.5 million.

The first phase of the restoration was originally estimated in 2015 at a cost of $2.7 million, but excluded architectural and engineering costs, construction management costs, and other support costs from the diocese, according to Barsanti. The cost of phase one was $4.7 million, he said.

Phase two is anticipated to cost $5.7 million. This includes additional expenses incurred during repairs to the roof, plaster walls, and electrical system. Additional costs for this phase include $450,000 in interest on the $5 million loan taken to support the work until fundraising pledges are collected and $600,000 in fundraising expenses, according to Barsanti. There is also a 5 percent allowance for uncollectible pledges.

According to Mahar, 8,389 donors contributed to the restoration. Donations ranged from $1 to $1 million; most gifts were around $1,500. The most meaningful figure, however? Gifts came from every county and every parish of the diocese, according to Mahar.

“It’s our Cathedral,” said Deacon Gary DiLallo, Pastoral Associate and Business Administrator for the parish. “We’re all part of the Church.”

The parish of about 270 families tithes and regularly gives funds to causes in need, Deacon DiLallo explained. The parish chose the St. Francis window in particular because the saint represents “being a servant,” he said.

More than 100 priests of the diocese donated to the restoration, including Msgr. Ronald Bill. This is not the first Cathedral restoration to which Msgr. Bill has contributed. His first donation came shortly after his Feb. 2, 1957, ordination.

Why has he given to these efforts?

“The Cathedral is a part of everybody that lives in the diocese,” he said. “It’s our home, really. It’s the place where we gather for all the important events in our diocese. It’s a place that welcomes everybody.”

Longtime Cathedral parishioners Bob and Judy Daino were married at the Cathedral 50 years ago; they marked their golden anniversary on Aug. 12. They also marked their donations to the restoration in honor of two Cathedral priests who are special in their lives: the late Msgr. Joseph Champlin and current rector Msgr. Neal Quartier.

Though they’ve lived and worshipped in Jamesville, Camillus, and Skaneateles over the years, they were always drawn back to the Cathedral.

“It just was home for us,” Judy said.

Both Judy and Bob noted the importance of the wide-ranging support for the restoration.

“The fact that so many people contributed to the restoration of the Cathedral I think speaks volumes,” Judy said.

“Seeing that the diocese as a whole made the commitment to bring this facility back to its former, or even greater, glory — I think that is going to make an impact on people,” Bob agreed.

Msgr. J. Robert Yeazel served as the Chair of the Cathedral Restoration Campaign.

“The response from laity, religious, and clergy has been most inspiring,” he told the Sun in an email. Traveling throughout the diocese to meet with those who love the Church has been an experience of faith and love. Our clergy, the finest anywhere, did amazing work in encouraging their parishioners to be major participants in this historic restoration, and they themselves, led the way with personal sacrificial pledges that were exceptional. All of us can now point to the Cathedral in a renewed way as ‘our’ Cathedral, as we have all played a most important role in its restoration and, in so doing, we can know that we have brought honor to Our Lady under the title of the Immaculate Conception, and that is our gift to Her Who daily blesses our lives.”

Christopher (Kit) Parker, who served as diocesan Director of Stewardship and Development until his retirement in June, agreed.

“It was great to see the way our parishioners and pastors pulled together with such generosity to honor this testament to our heritage and to our Blessed Mother,” he wrote to the Sun. “The leadership provided by Father Bob Yeazel and the strategies developed by Jim Kopp and Fred Roberts from Changing Our World made the campaign to fund the restoration such a wonderful success. Bishop Cunningham can be rightfully proud of what has been accomplished by the Church of Syracuse for future generations.”

With the interior restoration complete, the Cathedral will be officially reopened and rededicated during a special Mass of Thanksgiving on Sept. 8 at 4 p.m. Cardinal Timothy M. Dolan of the Archdiocese of New York will be the main celebrant. Expected guests at the event include bishops, local clergy and religious, local dignitaries, and donors.

For those unable to attend in person, the Mass will be live-streamed on the Syracuse Catholic Television YouTube channel — youtube.com/syrdio — and will feature Father Joseph Scardella, diocesan Director of the Office of Liturgy, as the guest commentator.

More than just the reopening of a building, the rededication of the Cathedral calls the faithful to rededicate themselves as well.

“The Cathedral is such a focal point, not only in the diocese but also in the community,” said Bishop Robert J. Cunningham. “Located on Columbus Circle, hundreds of people pass it each day. Hopefully the Cathedral serves as a reminder to us to lift our minds and hearts in prayer.”

“In the end I’m very pleased with the results. I think our generation has preserved the church for future generations, just as it had been preserved for us by those who went before us. During the campaign we often said that we are all its guardians. That’s why I’m glad that we have fulfilled our responsibility at the present time,” he said.

“The Cathedral Restoration Campaign raised more than $12.5 million from over 8,300 donors and I’m sure that many more supported us with their prayers. We feel a great deal of happiness and gratitude for the generosity of the people who wanted to make sure that the Cathedral’s structure was strong and vibrant.

“But of course, the most important thing of all is that it calls us to a renewal of our own faith and our own rededication to the Lord and to our Catholic faith.”