What’s the buzz? A live version of ‘Jesus Christ Superstar’ on Easter 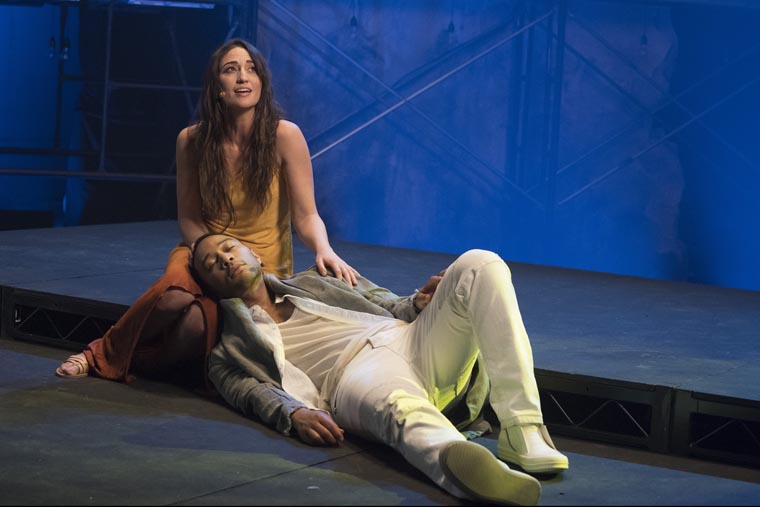 WASHINGTON (CNS) — Television viewers on Easter weekend will be pulled from the Old Testament on Holy Saturday to the New Testament on Easter.

ABC is showing the Cecil B. DeMille movie classic “The Ten Commandments” starring Charlton Heston, a Holy Week staple for the network at 7 p.m. EDT March 31. The next day, NBC is staging “Jesus Christ Superstar Live in Concert” at 8 p.m. EDT, the latest in its string of live shows that include “Peter Pan,” “The Sound of Music” and “The Wiz.”

“When we were doing these live musicals, we created some sort of mysterious list,” and “Superstar” was on it, said Neil Meron, executive producer of the April 1 presentation. But picking what and when the next show hadn’t really come together, he added, until “Bob Greenblatt (NBC Entertainment chairman) called us and said, ‘”Jesus Christ Superstar” Easter Sunday. It’s irresistible.'”

And it’s not just because the boss says so, either. “All of us, individually and collectively, have a long love affair with ‘Jesus Christ Superstar,'” Meron told Catholic News Service in a telephone interview from New York March 27, the first day the full cast had come together for run-through rehearsals.

The show stars popular singers John Legend as Jesus and Sara Bareilles, who was raised Catholic, as Mary Magdalene, and features 1970s rock figure Alice Cooper as Herod. Cooper was the final cast member to join the rehearsals, after having recently completed a tour. “But he’s in only one scene, so that makes it easier,” Meron said.

He noted, “The challenge of doing these particular shows is the challenge of who is going to be in it. A lot of stars are so intrigued about doing a live musical. It gives them a chance to do something theatrical and not commit to a long run.” The big nut to crack, Meron said, was making sure “the talent was available for when we wanted them.”

One example was Legend, who had a key supporting role in the 2016 hit “La La Land.” “We were able to work with John and his team to create a rehearsal schedule that allowed him to tour and work on the role. It’s always a challenge, but we found out over the course of a year, more and more people are interested in doing these shows,” Meron said.

Even after working on live musicals over the past few years, it’s still live TV. “You really don’t know what’s going to work or what doesn’t work,” he said.

For anyone who may have seen a stage performance of “Superstar,” which started as a two-LP “rock opera” in 1970, “we have learned to play with the genre,” Meron said. “We’ve learned that the presentation of them can be different each time out. For instance, with ‘Jesus Christ Superstar,’ it lent itself as being told as a concert presentation. It has a narrative, it’s quite theatrical, and presented more as a rock concert.”

Even so, there will be performance aspects to “Superstar.” Meron raved about Bareilles: “When she opens her mouth, every note, every lyric is the truth. When she sings ‘I Don’t Know How to Love Him,’ it’s like the first time you’ve heard the song. She brings a depth to the role that I don’t think anybody’s prepared for.”

This Easter, Meron is focusing all his energies on “Superstar,” so no sitting in front of the tube watching “The Ten Commandments” for him. “No not this year,” he said. “I know all of the Ten Commandments by heart after seeing it so many times.”