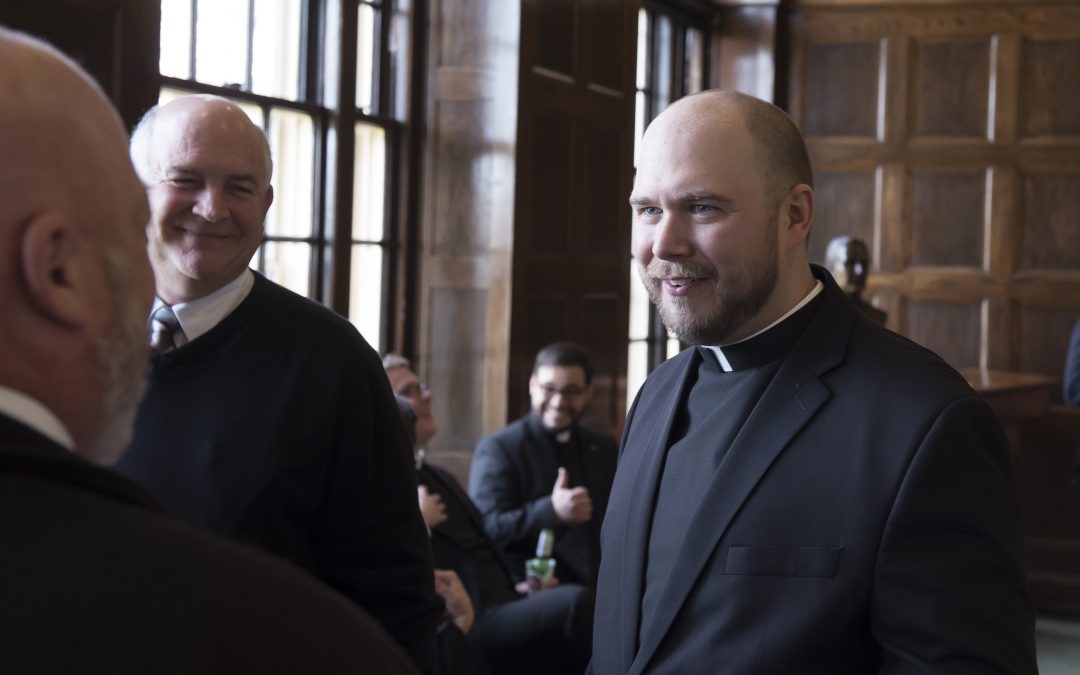 BALTIMORE, Md. — Deacon Nate Brooks, the diocese’s newest deacon, preached his first homily April 22, during Mass celebrated in the chapel where he was ordained to the transitional diaconate just the day before. Inspiration to put the finishing touches on the homily struck four days before, during morning prayer.

“‘God, I just need your help; I need your guidance,'” Brooks, in a phone interview with the Sun, recalled praying. “And I really felt His grace upon me this morning. An idea came to me that I’m going to be running with for the homily.

“And with that, all these graces of the future ministries I’m going to be doing — I just started thinking about them and reflecting about what I’m going to be asked to do — to preach, to baptize, to serve others — and it’s just a profound, amazing feeling and I just feel so blessed,” he said.

It turned out the inspiration was indeed divine.

“I felt comfortable giving the homily at the Mass,” Deacon Brooks told the Sun in an email April 23. “Earlier that morning, I was nervous before the Mass started but after the Mass began that nervousness left and I felt comfortable and at ease to be able to be a deacon and assist at the Mass. It was an awesome experience. I am excited about serving the Church as a deacon.” [Editor’s note: Read the full text of Deacon Brooks’ homily below.]

“Nate Brooks is the first young man to enter seminary from a parish I have been blessed to serve,” Father Celentano told the Sun in an email. During the ordination Mass and Mass the following day, it “was humbling to see what God is bringing to fulfillment in Nate. It was an honor to celebrate mass with Deacon Nate at the seminary for his family, some of the faculty, and a few Divine Mercy parishioners who stayed in Baltimore an extra day.”

“Knowing Deacon Nate for nearly 7 years, it was clear that he has a gift for public speaking,” Father Celentano continued. “He did not disappoint when it came to the homily! Deacon Nate shared a story from a novel about a priest that was inspirational and challenging. Connecting the ordination and the readings for the Sunday, he gave us three points to consider: pray, discern, and respond to whatever God asks of you.”

Deacon Brooks’ fellow Syracuse seminarian Brendan Foley told the Sun via email that “we can’t help but think of Deacon Nate in his new role on his way toward priesthood when he remarked in his homily: ‘Being the Good Shepherd will mean putting others’ needs before our own even when it means we lose while the other gains. I believe we that we are called to be a “good shepherd” no matter what our vocation is in life. We have a responsibility to help lead those around us closer to God.'”

“Deacon Nate also offered practical advice, explaining how important simple, personal daily prayers are, and how that has been influential in his life. He noted that the little mundane moments, ‘like driving in the car to or from work,’ are moments, small opportunities, that ‘I’m reminded to offer a personal prayer to God. I turn off the radio and remind myself of God’s presence and offer a prayer — even if it is just a minute or two, or maybe even part of a Rosary. It is something very simple, yet very significant that anyone can do.'”

“In closing, Deacon Nate quoted Pope Francis — ‘The Christian mission is now!’ — reminding us that ‘we are all called to become a witness of the Lord’ in all of our individual vocations. This naturally led Deacon Nate to conclude his homily by posing the question for his many family members and friends present: ‘How are we going to respond to Jesus today?'”

“Before the final hymn, Father Chris thanked Deacon Nate’s family and the many strong models of the faith who have journeyed with him and helped to form his vocation from a young age. Father Chris led the assembly in praying three Hail Marys and the Prayer of St. Michael — a Brooks family tradition from long ago.” 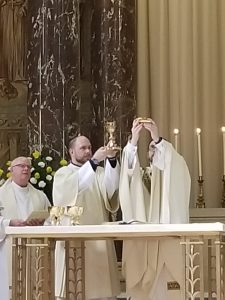 In 1940, Graham Greene wrote a book called “The Power and the Glory.” It is a fictional story about a priest who is only known by his nickname: the “whiskey priest.” The story takes place in Mexico during a time when Catholic priests were hunted down and were either killed or forced to denounce their religion and their beliefs. The whiskey priest decides to risk his life by staying in hiding and traveling around the towns in secret to provide sacraments to the townspeople. However, this priest is not perfect. He is not called the whiskey priest because he despises whiskey. The priest struggles with his decision to stay and to serve. The whiskey priest is the only priest in the area and, because of poor decisions he has made while being in hiding, he longs to go to confession. But there is no one left to hear his confession. He becomes jealous of the people he administers the Sacrament of Reconciliation to because they walk away forgiven while he lives in his own sin. So, the priest begins to struggle with why he has stayed for so long and truly believes himself to be a coward and a bad person. Even though his intentions are good, the whiskey priest feels his motives have been for the wrong reason. Near the end of the story the priest has to make a decision: to either stay in hiding and watch those who are hunting him kill people in the town for information on him; leave the country and save his life; or turn himself in to die.

The ultimate struggle for the whiskey priest is what his vocation is. Was he still supposed to be a priest? Should he give in to the demands that were being placed on him to renounce his faith or should he die for his beliefs? For the longest time he ran away from his responsibilities while ministering here and there. But the whiskey priest could not find any fulfillment in his life running from his vocation. Eventually the priest finds his calling — and that was to die for what he believed in and to no longer hide from his vocation of priesthood. The whiskey priest had a change of heart and followed the Good Shepherd.

In the Gospel today, Jesus proclaims himself as the Good Shepherd. Being the Good Shepherd will mean putting others’ needs before our own, even when it means we lose while the other gains. I believe that we are all called to be a good shepherd, no matter what our vocation is in life. We have a responsibility to help lead those around us closer to God, whether it is as a married couple who helps each other and their children grow closer to God or a priest who leads a community of believers. Jesus will be our model that we all can follow and learn from. First, we have to come to peace that we are not going to be perfect like Jesus and that we are going to make mistakes. Only Jesus can truly be the Good Shepherd, while we can strive to follow Jesus’ model. We cannot allow our past bad decisions to influence the potential good that we can do for others.

Jesus is asking us to follow him now. Not tomorrow or next month when it will fit into my schedule, but today. We need to accept this mission from Jesus, even if we have tried in the past and have not been successful, because today is our opportunity to start again. Today Jesus is calling our names and is inviting us to follow him, but we have to take the time to listen. Pope Francis voices his concern in a letter he wrote last December writing, “Nowadays listening is becoming more and more difficult, immersed as we are in a society full of noise, overstimulated and bombarded by information.” It is difficult to hear Jesus calling us when we surround ourselves in the business of our lives. The tasks and goals we accomplish in life are important, but so is following Jesus.

A question we may have is how? How can we slow our lives down and be open to what God is calling us to do in our lives? This is no easy task and it is something we must all judge for ourselves, and if we are going to be successful we must start slowly and be committed. Here are some suggestions I would like to make.

First, I think we need to find time in our schedules for personal daily prayer. I know this can be a difficult task and it could be tempting to just say I am too busy and give up, but we need to follow the Good Shepherd and lay our lives down for God. It will be necessary to pray so that we can open ourselves to what God is calling us to do in our lives. Next, once we have set that time aside for personal prayer, we must discern what God is calling us to do in our lives. God is calling each and every one of us for an important mission and we all need to discern what that mission is. Finally, after we have discerned what God’s will is in our lives, we must answer that call. This sometimes can be the most difficult thing to do. We often want to think things through and look at our other options before making a decision. However, if we have prayed about it and feel God calling us to an action, then we need to respond to that.

Jesus is calling us today. We need to answer that call and we need to be open to whatever that calling is from God. The whiskey priest allowed his past decisions to see himself as a terrible person and one who was not shepherding God’s people. However, the priest had a change of heart, he had a redeeming moment in his life where he was determined to do the right thing for the right reasons. We also cannot allow our past decisions to prevent us from following Jesus, who is inviting us to follow him. Pope Francis writes: “The Christian mission is now! Each one of us is called –—whether to the lay life in marriage, to the priestly life in the ordained ministry, or to a life of special consecration — in order to become a witness of the Lord, here and now.”
How are we going to respond to Jesus today?