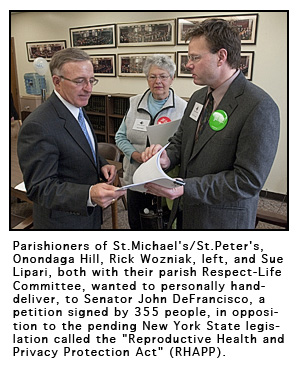 Students from schools throughout the Syracuse Diocese joined with Catholic Charities and numerous diocesan officials at the event to present the case of the New York State Catholic Conference.

The conference emphasized six major issues to state legislators: the Rockefeller drug laws, the Reproductive Health Act, traditional marriage, support for poor families, health care reform and preserving Catholic schools.
Students from both of Syracuse’s diocesan high schools found a sympathetic ear with State Senator John DeFrancisco regarding legislation that would help preserve Catholic schools. For several years now, Catholic schools throughout New York State have lobbied for a tax credit that would relieve some of the burden of tuition from parents who wish to send their children to private schools.

As a Christian Brothers Academy graduate, DeFrancisco used the opportunity to take a playful jab at his alma mater’s rival, Bishop Ludden. After asking the students to politely concede their chairs to the older representatives from Catholic Charities, DeFrancisco said, “If you’d gone to CBA instead of Bishop Ludden, you would have known that.”

After listening to the Catholic Charities representatives present their points to DeFrancisco, Joseph Pounder, the campus minister at Bishop Ludden Junior/Senior High School in Syracuse, said, “A lot of the issues going around the table come back to education.” Pounder went on to emphasize the value of Catholic education and the tax credit many believe will significantly help those wishing to attend private schools.
DeFrancisco noted that he has championed tax credits for several years, but told the students and school officials that there simply is not the support in the state legislature. “I’ve supported the tax credit every year, but there just aren’t enough votes,” he said. “I know all the arguments — I’ve made them on the senate floor — but there just aren’t enough votes.” 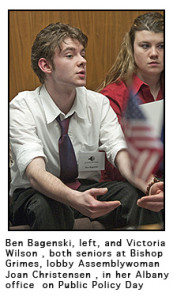 The representatives from Catholic Charities included Paul Welch, Nolasco Morado, Carol Schaffer and Mark Clary. Each representative in turn presented the issues of the conference.

In each case, DeFrancisco countered by referring to the state’s current financial crisis. New York is currently burdened with a $14 billion budget deficit.

“It’s always a question of where is [the money] going to come from,” DeFrancisco said.

DeFrancisco also addressed the question of traditional marriage. He said that given the current composition of the State Senate, a law approving gay marriage was likely to be passed “if not this year, then next year.”
DeFrancisco concluded the meeting by stressing that funds must be used more efficiently if the state is to survive in the current economic climate.

Earlier in the day, the students visited Assemblywoman Joan Christensen. The Ludden visit overlapped with the Grimes visit. Several students presented the case for tax credits to Christensen’s aide before the assemblywoman arrived.

“I attended public schools until seventh grade when I [enrolled at] Bishop Grimes,” John Zapisek said. “It has completely changed who I am.”

After Christensen arrived, Pounder reiterated the case for tax credits. “We’re here fighting for a tax credit for the families that have sacrificed,” Pounder said. “You see the product right here — excellence.”

Pounder concluded by appealing to the assemblywoman’s position. “You’re a voice for us,” he said.
Christensen countered by stressing the financial crisis gripping New York State. “You’re coming here with the best intentions, but we have a deficit and you want to add to the budget,” she said.

Christensen challenged the students and educators to add job creation to their agenda and repeatedly underscored the importance of the economy as it relates to each issue. 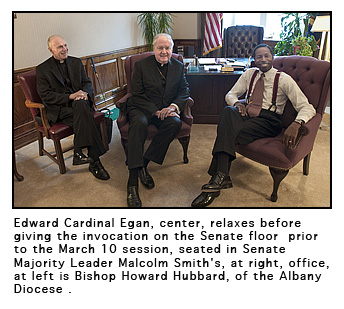 Noting that the pope had designated June 2008 through June 2009 the Year of St. Paul, Cardinal Egan utilized Acts 19: 23-40 extensively throughout his homily. That passage details St. Paul’s time in the city of Ephesus where, for the most part, he was able to proselytize freely. However, the witness of St. Paul created problems for the silversmiths of Ephesus who were famous for their images of the Greek goddess Artemis. One silversmith, Demetrius, agitated against St. Paul in the name of Artemis, which resulted in a crowd seizing the apostle’s lieutenants — Gaius and Aristarchus — and bringing them to a theater. An unnamed man, however, appealed to the crowd to release the disciples.

The cardinal referenced several issues raised by the conference, each time returning to the example of the “unnamed man.”

The cardinal noted that while many stories have evolved regarding minor figures in the Bible throughout its history, none has emerged naming the man who defended St. Paul’s lieutenants. “No one has ever told us the name of this clerk, this lawyer, this politician and I’m glad they didn’t because he is you and I — speaking truth to the State of New York,” Cardinal Egan said.