Wives of deacons in formation meet regularly to discuss their role, faith

Wives of deacons in formation meet regularly to discuss their role, faith 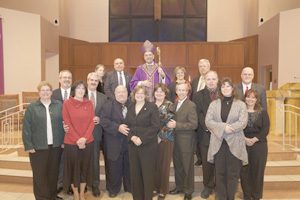 The wives of deacons in formation must officially give their consent before their husbands can be ordained.

“The marriage is the first sacrament that a couple undertakes,” said Mary Lou Paratore. “That really comes first and the church always recognizes that it is a sacred union.”

Paratore helps coordinate the wives group for deacons in formation. A new class starts every other year, so there are currently 18 women in the group whose husbands are in the second or fourth year of formation.

As an opportunity to learn more about faith and each other, the wives’ group meets every other month while the men take part in their own monthly meetings.

The day-long meetings are a chance for the wives to ask questions, learn more about spirituality and reflect on their own journey through faith. The next meeting will take place on Saturday, Feb. 6 at Holy Cross Church in DeWitt.

The day starts with a liturgy of the word, and there are courses on spirituality and guest speakers. Last year, for instance, Sister Marise May, OSF, spoke about different styles of prayer.

The women also read a book and reflect on it during the group meetings.

Paratore said this year’s group is considering feminist theology, and the book the group is reading is Quest for the Living God by Elizabeth Johnson. Father Louis Sogliuzzao, SJ, campus minister at Le Moyne College, will come in to discuss the book with the women.

She said that while the group is an opportunity to learn more about faith, it is also a good chance to talk through any anxieties or concerns.

“It’s exciting in the second, third and fourth year, but in the first year, it’s overwhelming because you don’t know what to expect,” Paratore said. “Young women need to realize it’s nothing scary. They’re not being asked by the church to stand out and be different.”

Usually, the husband’s call to ministry comes as no surprise to his wife, Paratore said. Men who become deacons are often very involved members of their church community.

“The wives pretty much know that their husbands have always had this love for the ministry and working in the church,” she said.  “It’s a gradual process, and most of the wives are somewhat familiar because the men have had to go through the Formation for Ministry program.”

This gradual deepening of faith and commitment to the church was Patricia Letizia’s experience. Her husband Michael is in his fourth year of formation. The couple started going to daily Mass, then Letizia joined the Eucharistic adoration group at her church, St. Joseph’s in Camillus. Now she finds herself reading the coursework for the wives’ group and feeling a little bit like she’s back at school.

She said that in addition to discussing the readings, the women also use the opportunity to discuss how they’re doing on a personal level. “We’ve become very close,” she said.

Letizia said the women whose husbands are farther along in the formation process can help the newer members of the group know what to expect. “That helps because they have a lot of questions and we’ve already been through that,” she said.

Paratore said one of the changes the women can expect is that their husbands may have less time for their family. It’s for this reason that men with young children are not encouraged to become deacons.

“It does impact the family, it does take time away,” Paratore said. “The ministry, you couldn’t put it on a schedule.” She said her husband gets phonecalls at night about baptisms, funerals or annulments. People pull him aside after Mass to talk, and because her husband Tony is retired now, he’s available to handle funerals, which can take place with little advanced notice.

But Paratore’s husband’s ministry also means that he can perform some of the significant services in his family’s life, services like weddings and baptisms.

“On a personal level, it’s really enriched his life, and our life as well,” Paratore said. “It’s just been a real blessing for our family. Our children have really stood in awe of all their father has accomplished. It’s bolstered all of our faith.”

Letizia said her husband’s call to ministry has had some surprising effects on her own family.

Her 32-year-old son called home recently to tell his parents that he was so inspired by their commitment to the church that he decided to respond with a commitment of his own: running the New  York City marathon. He would run to benefit autism research.

“And he finished,” Letizia said. “It took him five hours, but he finished. He said it changed his life.”

Letizia said the deepening commitment she and her husband share has changed her life as well. “It’s been a journey. It’s been a spiritual journey for me,” she said.

Paratore said that’s a journey she’s familiar with. And it’s a journey that has brought her some good friends along the way.

“It’s amazing,” Paratore said, “you make life-long friendships because very few women know the journey that a deacon’s wife is going on.”