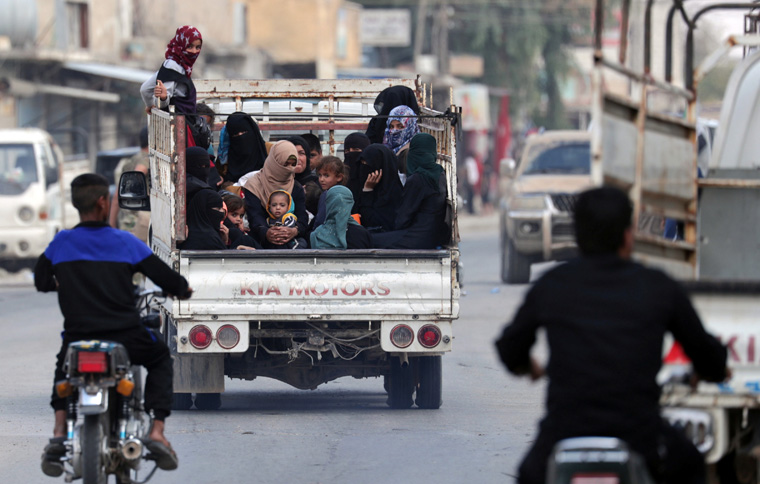 in early October raises serious moral questions on the responsibility to protect civilians caught in the middle of a new conflict.

Middle East and international law experts said Turkey’s push into Kurdish-ruled territory in Syria violates the United Nations charter and that the world must quickly pursue diplomatic means to head off a long-term occupation that is likely to be marked by forced relocation, brutality and even random killings.

Although Turkey agreed to a brief cease-fire Oct. 17, the experts rooted their concerns in the 2016 incursion by Turkey into northwest Syria in the Afrin and Euphrates Shield areas. Reports from the region chronicled how tens of thousands of civilians were forced from their homes, adding to the displacement of people who escaped the Syrian civil war that began in 2011.

“International law has to be front and center” to any response from the community of nations, said Mary Ellen O’Connell, professor of law at the University of Notre Dame Law School.

Turkey is required to withdraw from Syria under provisions of the U.N. charter, which prohibits one nation from using force against another, O’Connell, an international law expert, told Catholic News Service.

Mona Yacoubian, senior adviser on Syria, Middle East and North Africa at the U.S. Institute of Peace, agreed, saying the U.N., NATO, the European Union and the U.S. “need to rally around the dangers that are inherent in Turkey’s incursion into northeast Syria.”

She called for diplomatic pressure and targeted economic sanctions to be enacted “in ways that will change the Turkish calculus” while safeguarding people fleeing the violence.

Since the incursion into northeast Syria began, more than 160,000 people have fled, according to the UNHCR, the United Nations’ refugee agency. The Norwegian Refugee Agency reported that 1,006 people had entered Iraq by Oct. 17. Thousands more crowded into camps or remained along roads in the region with little hope of receiving immediate assistance.

Humanitarian agencies in Iraq, including Catholic Relief Services, were awaiting the arrival of thousands of Syrians in the weeks ahead.
A full Turkish withdrawal would open the door for humanitarian aid agencies to return to Syria, O’Connell said. Most international staffers of nongovernmental organizations evacuated soon after the incursion began Oct. 9.

Another — and more complex — step toward peace would be the opening of region-wide peace negotiations so that the myriad concerns of all parties can be discussed, O’Connell said.

Such talks would address Turkey’s security concerns about long-standing attacks by Kurdish rebels within its borders, the desire for self-governance by Kurds in the region, and the importance of securing the human rights for millions of people in Syria in particular but elsewhere as well, including Christian and Yazidi minority communities.

However, Turkish President Recep Tayyip Erdogan has ignored calls for any withdrawal of his country’s forces, which had pushed out Kurdish and Arab families in an attempt to establish a 20-mile wide “buffer” within Syria along the border with Turkey.

Turkish leaders in Ankara have long been tormented by the Kurdistan Workers Party, or PKK, which has waged a guerrilla campaign inside Turkey since the 1980s. Turkey, the U.S. and the European Union have designated the PKK a terrorist organization. PKK has ties to Kurdish defense forces in Syria, fueling Turkey’s desire for the buffer.

In addition, Erdogan has made it no secret that he wants to forcibly return 1 million to 2 million Syrian refugees living in Turkey who escaped their country’s civil war, which has targeted the regime of Syrian President Bashar Assad. Erdogan laid out his plan at the U.N. in September and began implementing it within 48 hours of the start of the U.S. withdrawal.

President Donald Trump in response to the incursion sent Vice President Mike Pence and Secretary of State Mike Pompeo to meet with Erdogan, who agreed to the five-day cease-fire.

Trump has said in justifying his decision that he believes the U.S. has no stake in Syria and admitted he believes the parties involved can work out their differences on their own.

Such a stance falls far short of addressing the perilous threats facing civilians and religious minorities. Trump’s decision to withdraw American troops has been widely condemned and is seen as an abandonment of the Kurds, which allied with the U.S. and other nations in the fight against the Islamic State group.

Paul Pillar, nonresident senior fellow at the Center for Security Studies at Georgetown University, called on all parties to find common ground in any talks that might emerge and to focus on the betterment of all people in the region.

“I think the biggest responsibility is for the United States to hasten an overall peace settlement in Syria,” Pillar told CNS. “If the suffering of that country and all the people in it is going to be reduced, it is gong to have to be through some set of compromises involving negotiations with all parties with the support of outside powers and the United States has been pretty much absent from that.”

Pillar, who addressed the American pullout in a blog post Oct. 9 on LobeLog, was not optimistic the U.S. would seek a major role in finding a solution to the Syrian crisis despite what he sees as moral and ethical responsibilities to do so. “The administration has been very poor at doing that sort of thing,” he said.

The same questions were addressed in a Sept. 24 report from the congressionally mandated Syria Study Group, working through the U.S. Institute of Peace. The report outlined the consequences of a U.S. pullout — some of which have already occurred — proving it to be remarkably prescient.

Michael Singh, managing director of the Washington Institute for Near East Policy and co-chair of the study group, told CNS the report described “why it was a bad idea to withdraw,” citing among several expected outcomes that includes the likely rebirth of the Islamic State.

He said U.S. involvement in resolving the region’s conflicts should be based on more than American interests, but also on “American values” of loyalty and duty to allies like the Kurdish militia.

“This issue of a duty to a partner is something that people relate to in a very commonsense way,” Singh said. “That’s something which policymakers in Washington have to take into account. Yes, there is a strong consideration of what duty and obligation do we have to our ally, especially one that lost 11,000 fighters in the fight with ISIS.”

Outside of diplomatic circles, PAX, the Pax Christi International affiliate in Netherlands, has followed the Syrian situation closely. Marjolein Wijninckx, Middle East program director at PAX, said the organization’s primary concern has been for civilians caught in horrendous conditions across northern Syria.

She expressed apprehension that, just as in northwest Syria, human rights violations will escalate during a Turkish occupation.
Wijninckx called on European bishops and even Pope Francis to raise their moral voices to address the dire situation and to press for an immediate end to the violence.

“It’s always important that they speak out,” she said. “Everyone is in danger there.”

Archbishop Timothy P. Broglio of the U.S. Archdiocese for the Military Services, chairman of the U.S. bishops’ Committee on International Justice and Peace, urged the international community Oct. 17 to renew a commitment to peace in the wake of Turkey’s incursion into Syria.

In a statement, he expressed concern that “military actions will create further instability, violence and hunger, exacerbating an already fragile humanitarian situation in northeast Syria and northern Iraq.”

“The ancient Christians and other religious minorities who have called this region home for millennia are at risk of being lost forever,” he added.

Even backed by the moral voice of the bishops and religious leaders, the work ahead will be difficult and government leaders will have to realize that “a militaristic approach to the grievances of people who organize insurgencies is a failure,” said O’Connell at Notre Dame.

“We need honest brokers and great mediators to negotiate a solution,” she said.