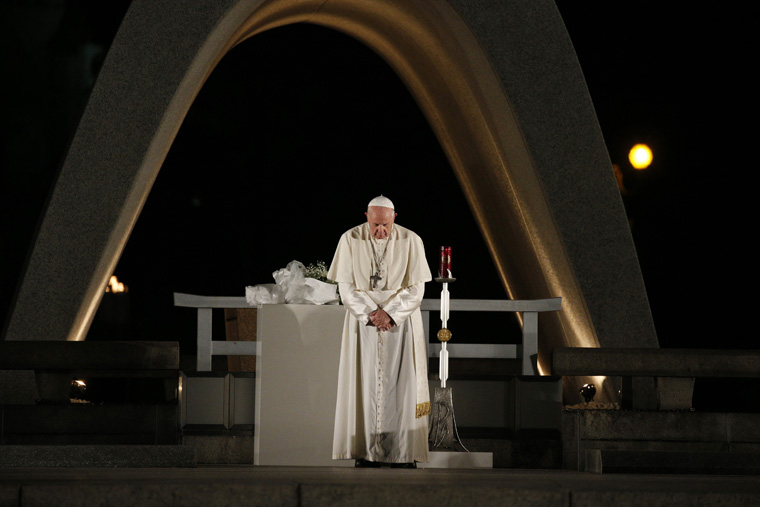 VATICAN CITY (CNS) — The world does not need more empty words, it needs committed, active peacemakers who do not exclude or manipulate, but are open to respectful dialogue, Pope Francis said in his annual message for the World Day of Peace Jan. 1.

“In fact, we cannot truly achieve peace without a convinced dialogue between men and women who seek the truth beyond ideologies and differing opinions,” the pope said in the message released Dec. 12.

Peace requires “patient effort to seek truth and justice, to honor the memory of victims and to open the way, step by step, to a shared hope stronger than the desire for vengeance,” he said.

Peace also requires “ecological conversion,” he said, which basically is “a new way of looking at life as we consider the generosity of the Creator who has given us the earth and called us to a share it in joy and moderation.”

People, he said, need “a new way to dwell in our common home, to accept our differences, to respect and celebrate the life that we have received and share, and to seek living conditions and models of society that favor the continued flourishing of life and the development of the common good of the entire human family.”

The pope’s message was released at a Vatican news conference led by Cardinal Peter Turkson, head of the Dicastery for Promoting Integral Human Development.

The pope defined peace as a journey built on: hope that inspires people to keep moving forward, “even when obstacles seem insurmountable”; listening that learns lessons from the past; reconciliation that respects others; ecological conversion; and patience and trust.

His message, which the Vatican sends to heads of state around the world, invited everyone “to set aside every act of violence in thought, word and deed, whether against our neighbors or against God’s creation.”

“The culture of fraternal encounter shatters the culture of conflict,” he said, and it makes “every encounter a possibility and a gift of God’s generous love. It leads us beyond the limits of our narrow horizons and constantly encourages us to a live in a spirit of universal fraternity, as children of the one heavenly Father.”

Pope Francis said every act of war is “a form of fratricide that destroys the human family’s innate vocation to brotherhood,” and all violence has a lasting effect “on the body and soul of humanity.”

War often begins with the inability to accept the diversity of others and is fueled “by a perversion of relationships, by hegemonic ambitions, by abuses of power, by fear of others and by seeing diversity as an obstacle,” he said.   Peace, stability and security cannot be built by fear or threats, particularly “the threat of total annihilation” with a strategy of nuclear deterrence.
“Every threatening situation feeds mistrust and leads people to withdraw into their own safety zone,” he said.

A “global ethic of solidarity and cooperation in the service of a future” is needed, he said, and it can be achieved by pursuing “a genuine fraternity based on our common origin from God and exercised in dialogue and mutual trust.”

“The desire for peace lies deep within the human heart, and we should not resign ourselves to seeking anything less than this,” he said.

A patient and respectful listening to victims and lessons of the past “can lead to courageous and even heroic decisions,” Pope Francis wrote. “It can unleash new energies and kindle new hope in individuals and communities.”

People’s moral consciences must be formed and strengthened, and individual and political will must be renewed, he said, “so that new ways can be found to reconcile and unite individuals and communities.”

“The world does not need empty words but convinced witnesses, peacemakers who are open to a dialogue that rejects exclusion or manipulation,” he said.

“There can be no true peace unless we show ourselves capable of developing a more just economic system,” he also said in the message.

Reconciliation and forgiveness also are essential for creating a more fraternal world, the pope said. “We should never encapsulate others in what they may have said or done, but value them for the promise that they embody.”

And, he wrote, “only by choosing the path of respect can we break the spiral of vengeance and set out on the journey of hope.”

In conclusion, the pope asked, “May all men and women who come into this world experience a life of peace and develop fully the promise of life and love dwelling in their heart.”