‘You cannot be a Catholic and sit on the sidelines,’ archbishop says 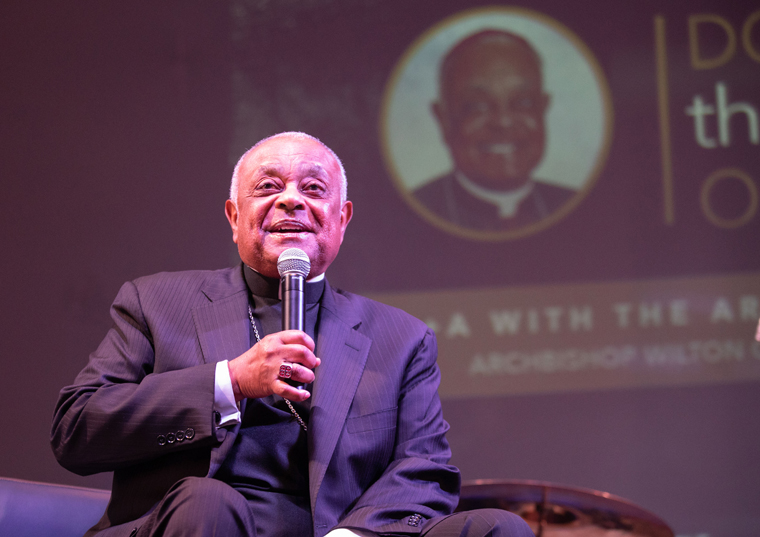 WASHINGTON (CNS) — In a crowded bar, bustling with young adult Catholics from the Washington area for the monthly Theology on Tap, Archbishop Wilton D. Gregory shared his pain over what this archdiocese suffered in the past year due to priestly abuse scandals, and encouraged the young adults to turn to the Eucharist as a source of healing.

“I’m not quite as young as you, but I, too, am let down by the leadership in the church,” Archbishop Gregory said. “I’ve been embarrassed. I’ve been embarrassed as a Catholic, as a priest, and as a bishop, because of the behavior by some of my fellow clerics.”

“When the family has been embarrassed, everyone in the family feels embarrassed, and I do too,” said the 71-year-old archbishop. “I know this past year has been an extraordinarily painful year for Washington.”

Hundreds attended Theology on Tap Aug. 13 to hear from the archbishop, who answered questions ranging from his daily prayer life and his favorite restaurants in Rome, to his conversion story as a young boy in Chicago. He also answered questions about the abuse crisis, inclusivity and sensitivity within the church, and evangelization.

“You cannot be a Catholic and sit on the sidelines,” Archbishop Gregory told the young people. “To be a member of the church means you’ve got to get in and get your hands dirty in the mix of the whole arena of faith from what we believe and profess to how we live and treat one another. … You can’t not invest yourself into this family.

“To belong to a family means that you are invested in the life, the struggles, the pain, the joys that belong to being a member of this family, and that includes our faith, what we hold as true, and also it involves our investment in social justice dimensions of our faith. You can’t be a good Catholic invested in eucharistic adoration, but unconcerned about the poor, those waiting to be born, those on death row. You’ve got to buy the whole lot.”

Sponsored by DC Catholic, the young adult ministry of the Archdiocese of Washington, Theology on Tap invites young adults ages 21 to late 30s into monthly discussions about living out the Catholic faith in the world.

Pope Francis appointed Archbishop Gregory to head the Archdiocese of Washington in April. He was installed May 21. He had been Atlanta’s archbishop since January 2005.
The appointment, he said, came as a surprise, as he expected to remain in Atlanta until retirement.

“I was stunned for a couple of reasons,” he told the young people. “I was 71 and that’s not usually the age you get a new job. … But I can also say, since coming here — even with the challenges, which there are many — I feel energized, I feel like I have a new lease on life. I’m just glad that (Pope) Francis couldn’t find anybody better.”

The archbishop made a commitment during the evening to restore the trust in his archdiocese, mainly by being an “ordinary member of this local church,” he said.

“That is, someone who identifies with the people, demonstrates that he is comfortable with his people, enjoys being with his people and I will try to the best of my ability to continue doing that, to be available and immersed in the life of this local church,” Archbishop Gregory said.

He also shared his hope to bring a “Laudato Si'” action plan to the archdiocese, similar to what he helped form in the Atlanta alongside the University of Georgia.

“I would like to see it and would be willing to adapt it to the Archdiocese of Washington,” he said, adding that he would like to be in conversation with the local universities.

The archbishop also encouraged parish churches to be open for more times of eucharistic adoration, with the hope the Eucharist can bring healing to the local church.

Many young adults said they were encouraged by the archbishop’s answers to their questions.

“It’s a tough time to be Catholic,” Nadia Barnett, a member at St. Andrew the Apostle Parish in Silver Spring, Maryland, said, noting how she appreciated the archbishop’s emphasis on the family of the church.

“His commitment to being the listener is refreshing,” Barnett told the Catholic Standard, newspaper of the Archdiocese of Washington. “Especially here, at a bar.”

Jaime Narbon, who has been in the area for the past seven years, said the archbishop “seemed to me to be a person that knows how to reach out to communities.”

“He acknowledged the pain the church faces, acknowledging the fault and culpability that the clergy has had in the whole crisis,” Narbon continued. “He didn’t put away blame or sugarcoat it.”

Narbon said he was thankful for the archbishop’s answers to questions on social justice issues, particularly his emphasis on the dignity of the human person and being created in the image and likeness of God.

“But more importantly about the Eucharist as a source of healing,” Narbon said. “The church stands by the teaching of the Real Presence. He encouraged priests, religious and laity to be engaged.”