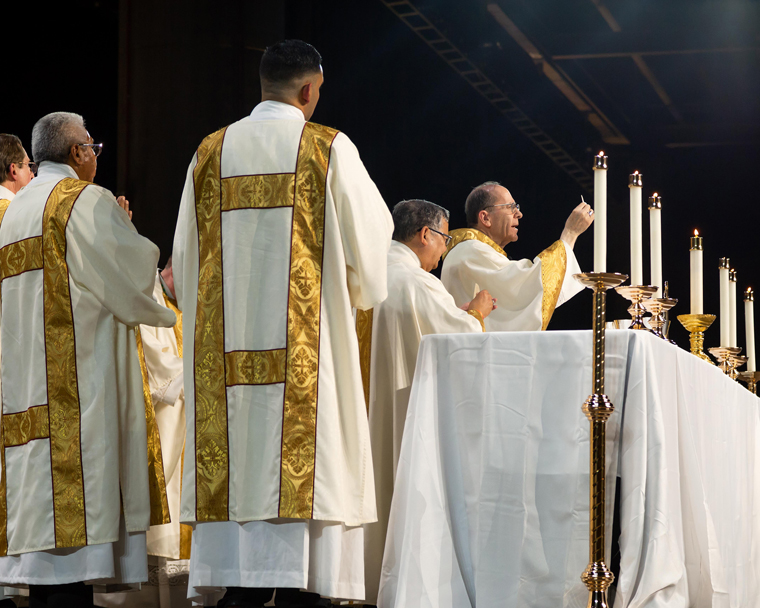 PHOENIX (CNS) — Young adult Catholics can lead others to God through their actions and daily experiences, a priest of the Diocese of Phoenix told the annual Student Leadership Summit of the Fellowship of Catholic University Students.

Father John Parks, vicar for Evangelization for the Diocese of Phoenix, told more than 8,500 young adults at the opening Mass Dec. 30 that they can bring unbelieving individuals to belief in God.

“You’re the solution. That’s why you’re here at SLS, that’s why God called you. He wants to use you to help those people come to live in faith,” he said.

Father Parks cited Anna from the day’s Gospel reading who waited on the Lord. He encouraged attendees to use Anna as a model of the faith.
“When you wait on the Lord, when he’s the number one desire of your heart, that increases your awareness of the Lord and you start to see the Lord in everything,” Father Parks said. “When you see the Lord in everything, you feel called to respond to him.”

As the FOCUS conference opened, Phoenix Bishop Thomas J. Olmsted welcomed the young adults from college campuses and parishes in the U.S. and around the world.

The five-day conference focused on the theme of responding to the Lord. Following Mass, attendees heard from two popular speakers who use YouTube to evangelize: Father Mike Schmitz and Emily Wilson.

Father Schmitz, chaplain for Newman Catholic Campus Ministries at the University of Minnesota-Duluth, said Jesus at one time was optional for him, until he realized that Jesus should be a necessity. Father Schmitz explained that Jesus is not optional but can be a balm for the world in which people say everything is fine in their lives when often it is not.

“I’m afraid that when we say, ‘I’m fine,’ we actually believe it,” said Father Schmitz. “It’s normal not to be seen, not to be known, not to be loved, and then Jesus shows up, and he says, ‘You don’t have to pretend you’re fine anymore. You actually need me.'”

Father Schmitz’s presentation culminated with a guided prayerful meditation. Attendees prayed along with Father Schmitz, the sound of everyone’s voice like a low-rumbling echo of praise to God: “Jesus, I confess that I’ve treated you like an option. In Jesus’ name, I declare I am not fine. In Jesus’ name I declare that I am his.”

Wilson, who travels widely as a inspirational speaker and author, invited attendees to commit their lives to God. She stressed the deep desire of every soul to be known by name and to be loved.

“Jesus comes to find us and calls us by name,” Wilson said. “Jesus says, ‘In all of your sorrow, in all of your sin, I still love you.'”

Wilson encouraged attendees to grow their trust in God as well. The conference is designed to equip young people to evangelize and, as Wilson said, no one can lead others to God if he or she doesn’t trust God themselves.

She dedicated the last minutes of her talk to prayer where participants had the opportunity to respond to Jesus’ call and to commit or recommit their lives to him. Participants bowed their heads in prayer, outstretched their hands in adoration, and sang along to the live band saying, “I will put my trust in you alone and I will not be shaken.”

Gabby Sanchez, a student from West Coast University in Anaheim, California, told The Catholic Sun, newspaper of the Diocese of Phoenix, that she is learning to put her trust in God. The summit is Sanchez’s second FOCUS conference. She attended her first conference in 2019, when she was still studying at Northern Arizona University, a campus that has five FOCUS missionaries.

Sanchez currently attends a university that doesn’t have FOCUS missionaries, yet she felt a prominent call during Wilson’s talk to be a leader at her home parish in California. She lead a small group during the summit and hopes to take back what she learned.

“Even when I feel so small and not worthy to lead others in their faith, Jesus is showing me that I am worthy and called to live mission and called to make disciples of all nations,” she said.