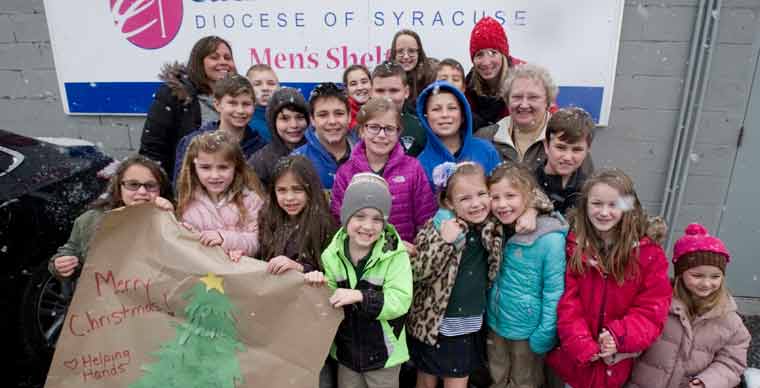 As the first female to work at the Catholic Charities Emergency Shelter for Men in Syracuse, Janet Rose says that she offers a softer touch. She agrees that on Dec. 9 it got softer yet: The kids of Holy Family School made their joyful, chatty entrance.

Helping Hands, the school’s service group, stayed for about 40 minutes. About 50 people, including teachers, parents, and about 30 children, came bearing what third-grader Santino Sanford dubbed “treats”: oranges, plastic bags filled with delicious candies, and homemade Christmas cards. Fourth-grader Grace Olivia made sure that the cards had the Christmas colors in them: “a lot of red and green.”

The shelter serves men who have nowhere else to go when it is cold and snowing outside, as it was Dec. 9. It is now open 24 hours, and the men receive sandwiches or hot meals that volunteers bring in. But on this day they got more. With not the slightest hesitation, the children excitedly placed the treats on the 112 beds in the shelter.

It seemed that the happiness of childhood was transferrable, at least during Advent. The children’s chirping was an amplified version of the small birds in the large bush outside the shelter.

“It’s amazing,” said Rose, who has been loving her job every day for a little over three years now. “I think it’s absolutely amazing. It does wonderful things for the residents’ spirits, and I think, as importantly, it allows the kids to see that people do live this way. Some of the people on the street, this is where they come through, this is the only place they have. So some of them I’m sure have never seen anything like this.”

“Anytime we have something like this, it’s a real positive event for the guys, and hopefully the kids gain something from it too,” said shelter aide Michael Sullivan.

One of the shelter’s clients lay on his back smiling. Very quickly, his midsection was covered with orange peels as he dug into his presents from the children.

Fifth-grader Andrew Brunger said he was treated really nice by the people at the shelter. He said he came to help, “by making them a little bit more happy.”

Fourth-grader Grace, who was so meticulous about flooding the place with colorful Christmas cards, said, “I saw people that were less fortunate than I was, and I wanted to help them out by bringing them a little holiday cheer.”

Luke Infanti, a fifth-grader, was another student who eagerly lined up to be interviewed by a reporter.

“I’ve been here more than once,” he said, “and I just feel so good when I leave here, because God sent us here to serve. And some people here are not as fortunate as us and [we] just need to remember that we should be thankful for everything we have.”

Luke’s mother, Liz Infanti, is a second-grade teacher at Holy Family and the coordinator of Helping Hands, which started a month ago with the purpose of doing community outreach each month.

The principal, Sister Christina Marie Luczynski, CSSF, was asked what the children were accomplishing in their visit.

“I think they’re getting another perspective on life that not everybody has the comforts of home that they’re used to, and it’s putting the corporal works of mercy in action,” Sister Christina said. “They’re seeing it in action here, that they have the ability to help in some small way to alleviate somebody else’s hurting situation.”

When the children get older, she said, “they’ll think about this, and how good it felt to help out, especially at Christmastime.” They will be able to donate even more, she said, and they will see the value of service.

“We are our brothers’ keepers,” she said, “and they have to learn that.”

Father John D. Manno, the pastor of Holy Family Church, surveyed the scene inside the shelter with approval.

Father Manno, a longtime visitor to and helper of the homeless, pondered a question about how the children reacted to the trip to the shelter.

The children had no preconceived notions. “It was just: Let me go down and do what I can to help out,” Father Manno said.

“So many blessings were received [in the visit],” he said. “Hopefully for the residents here, and for the kids to be able to say: ‘This is something that we need to do not just once in a while, but make this a regular practice of making sure we reach out and help others.’”

Father Manno noted the benefits to the residents too.

“The gratitude is the thing,” he said. “I think it’s always overwhelming to hear how grateful they are, just for the fact that we would come in. I think so often, most people would be inclined to turn away, or to maybe ignore some of these men. … So you can sense their gratitude and their happiness for that.”

Shelter aide Rose said that one of her bosses told her, “‘You’ve proved, Janet, what I’ve always said: Everybody needs a mother and a father.’”